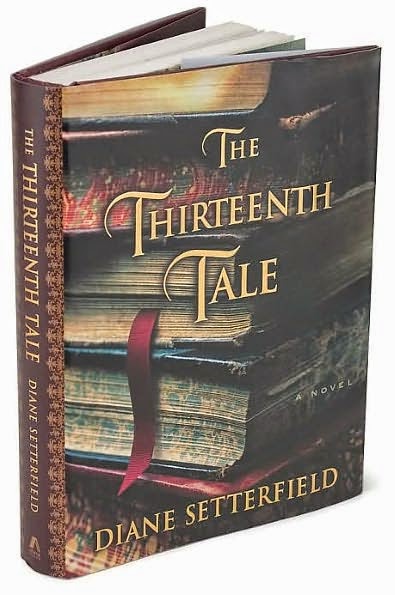 When one of the characters in Diane Setterfield's The Thirteenth Tale (2006) has an emotional crisis, she walks out onto the moors during a late autumn rainstorm and has to be carried back to shelter, wracked with fever. A doctor examines her, checks her temperature and pulse, and then begins to ask her questions. Has she read Jane Eyre? Does she love it? Wuthering Heights? Sense and Sensibility? Read and reread them over the years? She nods to each. His diagnosis: an excessively bookish, overly imaginative woman who needs to sleep more, eat better, and generally spend more time in this world, tending to the health of her body.

Surely this is a self-portrait of our author, for few people can ever have lived more fully in the world of the nineteenth-century novel than Diane Setterfield. Her book is set in our era, but in every important sense it is a nineteenth-century story. Much of the narration consists of  memories from long ago, or researches into long ago happenings. It is set partly in a grand old house falling into decay, partly in another grand old house alone amidst the moors. It concerns old family secrets, people who seem to have no pasts, mad relatives who may be hiding in abandoned sections of the house, estates controlled by solicitors because the owners are missing or deranged, clues left with abandoned babies, and more. Gradually the mystery is unraveled, the secrets laid bare, the pieces more or less assembled into a coherent story. It has Gothic notes but I would not call it a Gothic tale as some reviewers have; it seemed to me too civilized for that, more of a cross between a Gothic romance and a book by Dickens or Jane Austen. About as Gothic as Jane Eyre, come to think of it.

I just finished listening to it, and I enjoyed it. I recommend it, especially for anyone who likes nineteenth-century novels but wishes they weren't quite so long and Victorian.
Posted by John at 9:02 AM