Franz von Stuck, or, What did the Symbolists Mean? 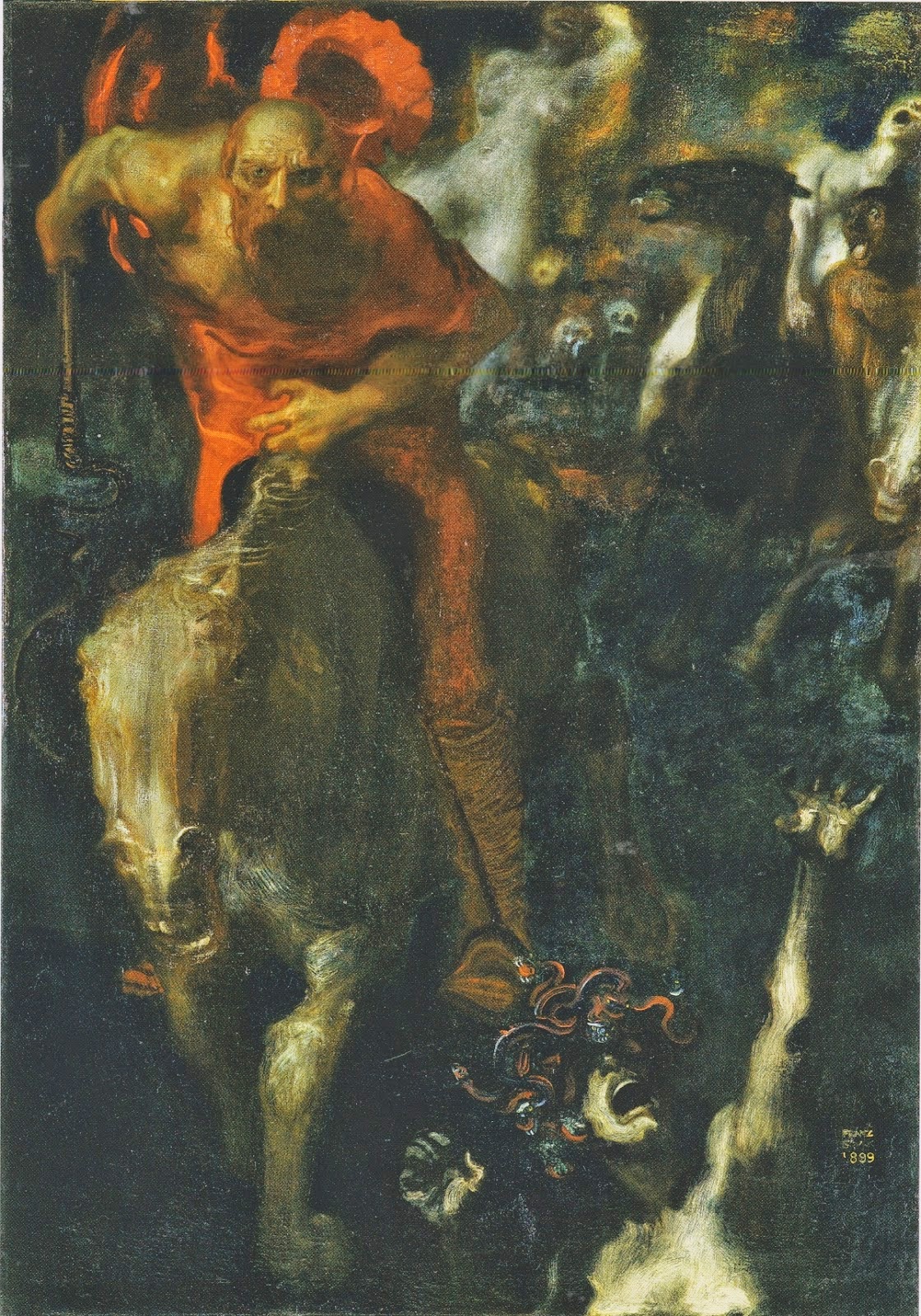 I decided to write a post on Franz von Stuck (1863-1928) after seeing the painting above, The Wild Hunt (1899). I've always been fascinated with the Wild Hunt and its place in European mythology, and this image really grabs me. 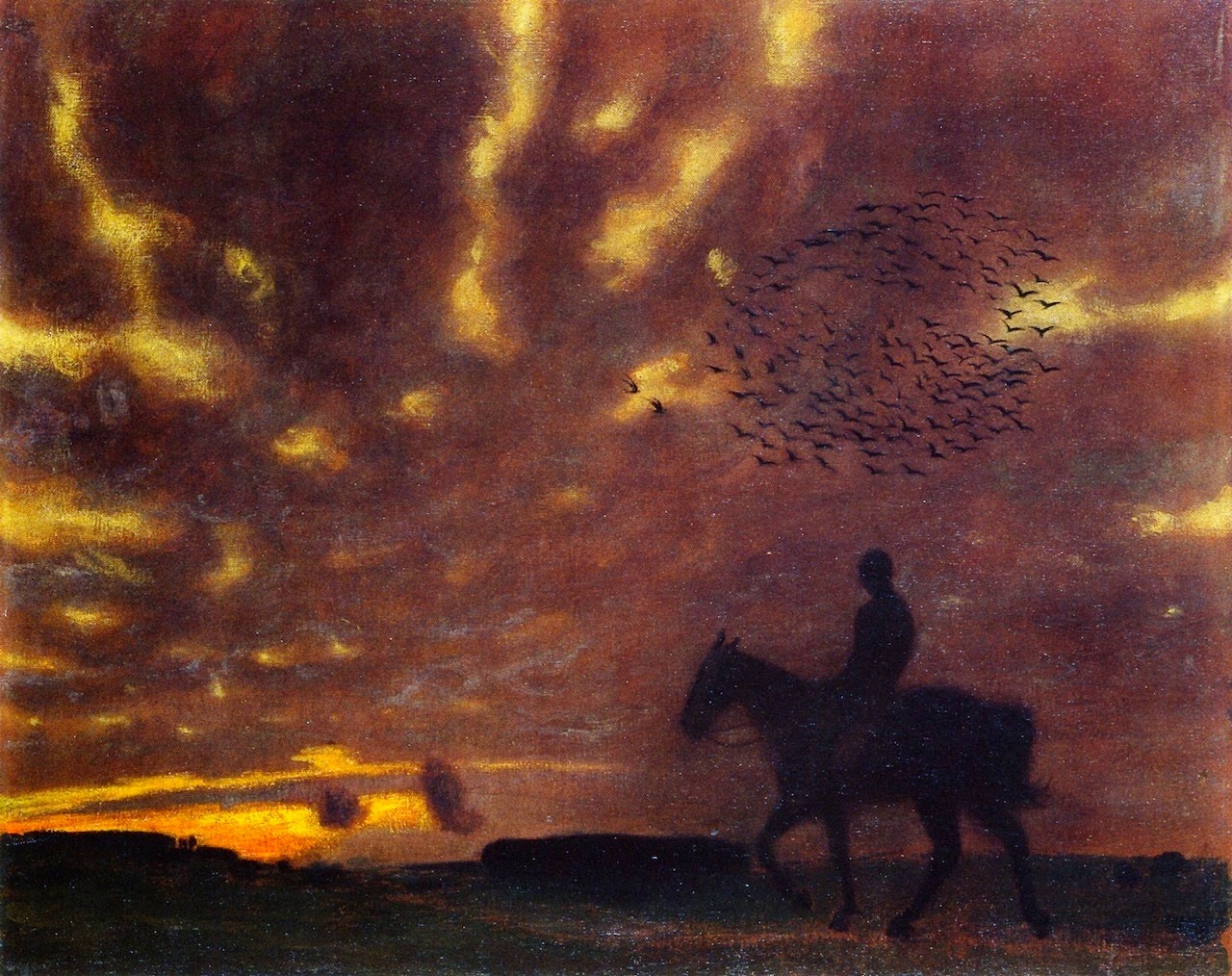 When I write these posts about artists I usually spend an hour or two reading about them online and in the art textbooks I have on my shelves. Besides wikipedia, there are several museums that have excellent web sites with good information about artists, notably the Met, the Getty, and the Musee d'Orsay. None of them told me much of anything. (Autumn Evening, 1893) 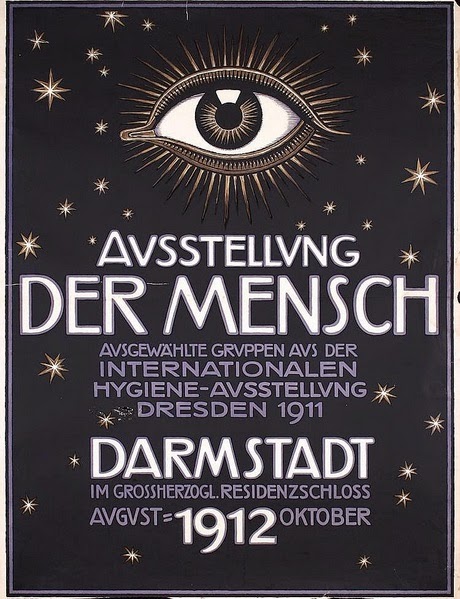 Oh, they give the outline of his career -- son of a Bavarian miller, commercial artist at 17, art school in Munich, several years of graphic design work (like the poster above), first big success as a painter in 1889. But nothing at all about what he thought, or felt, or said, or wrote.

Franz von Stuck also has his own museum, housed in his old home in Munich. By 1897 Stuck had grown so rich that he could afford to build this for himself; contemporaries called him the Painter Prince. 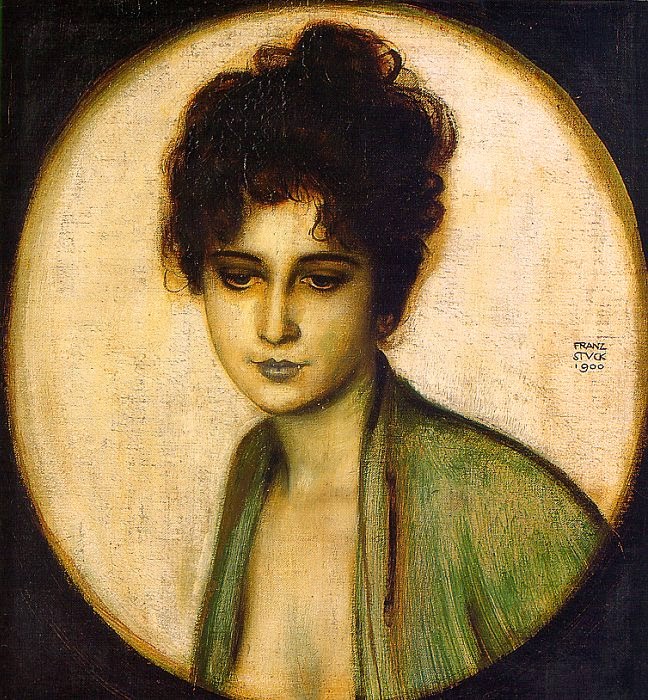 Apparently he made most of his money off portraits, but I can't find many of these online. This one is nice. Anyway, the semi-derelict von Stuck house was renovated into a museum in the late 1960s, when Symbolist art was back in fashion and the German government was wealthy enough to resume supporting the arts in a big way. 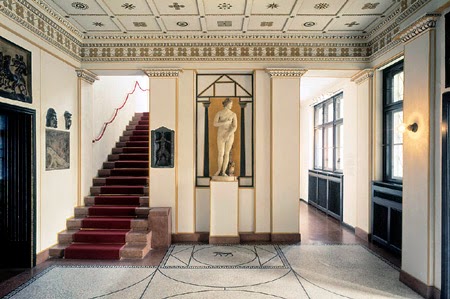 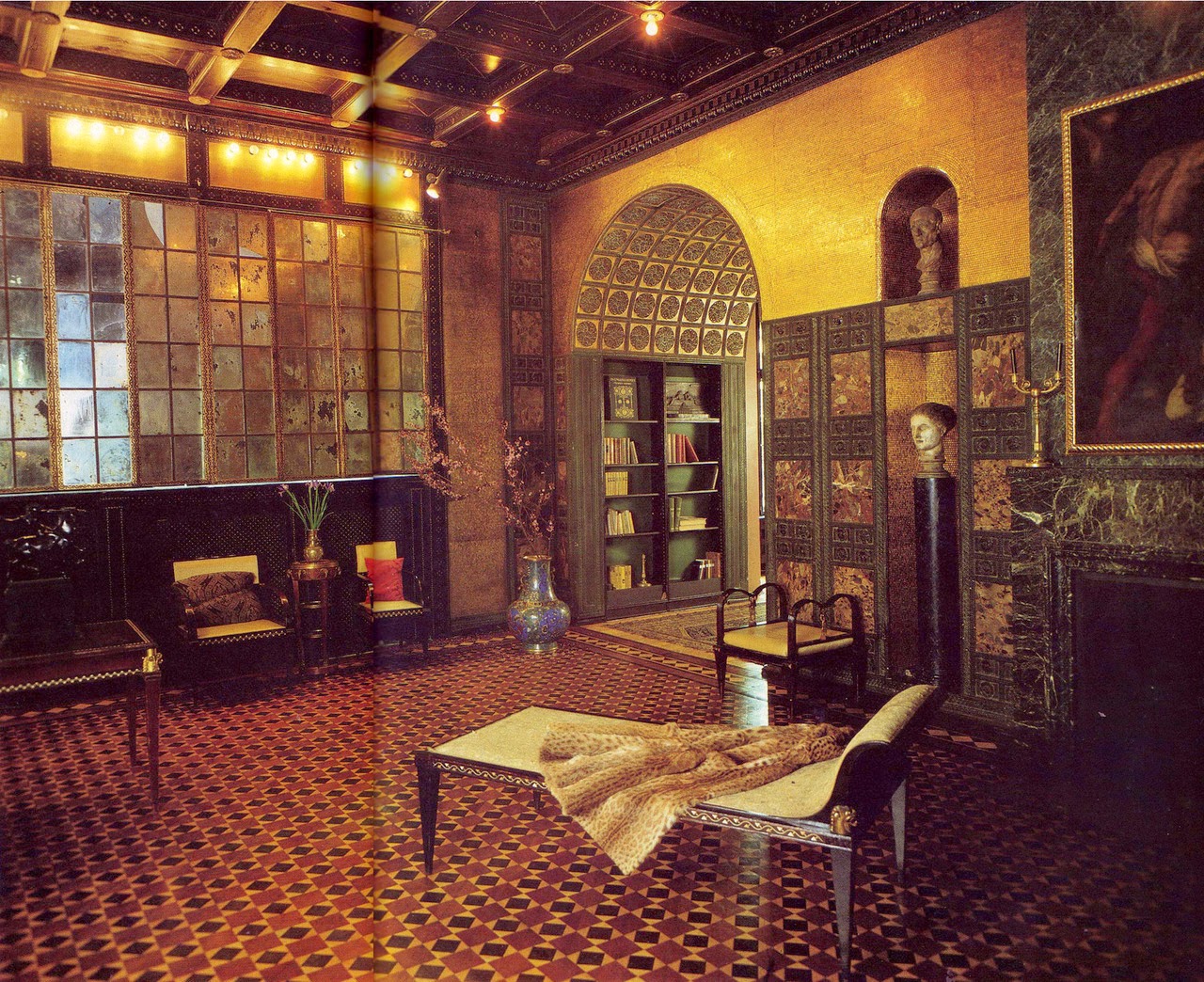 And they have a web site that says a lot about the furnishings in each room of the house -- the doorknocker is a bronze medusa -- but, again, not much about what motivated Stuck's interest in art, or myth, or the Symbolist movement, or anything else. 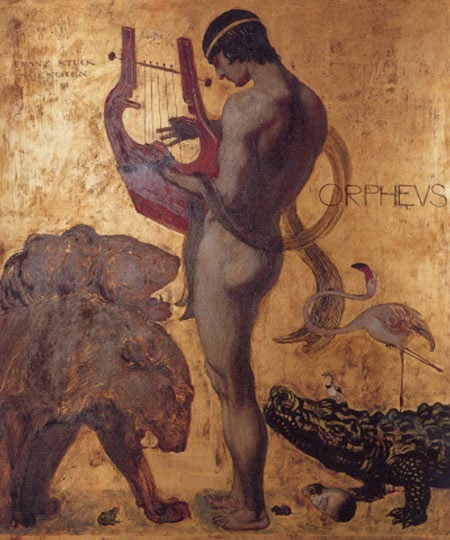 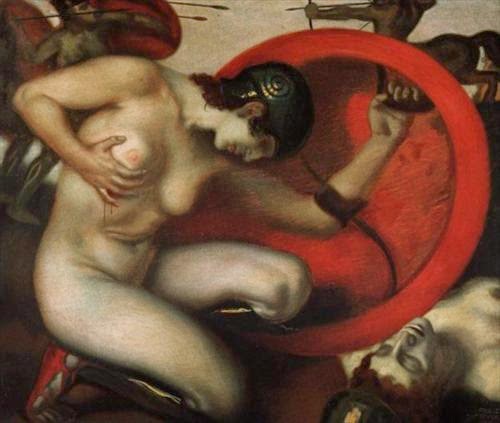 The museum does tell you that von Stuck was interested in mythology, which is such a revelation about a man whose oeuvre includes Orpheus (1891), The Wounded Amazon (1904), and about fifty other such scenes. In fact von Stuck was so traditional in most of his subject matter -- portraits, mythological scenes, scenes of the life of Christ -- that you have to wonder why he was a founding member of the Munich Secession in 1890. These Secesssions, which sprang up all over Europe in imitation of the Parisian original, were clubs of artists who renounced the official salons that had been the centers of the European art world and organized their own exhibits. The usual complaint was that the official salons were stifling creativity by insisting on traditional subject matter. All I can think is that von Stuck joined the Munich Secession because that was the cool place to be, the place where the most interesting and talented artists of his generation were showing their stuff. 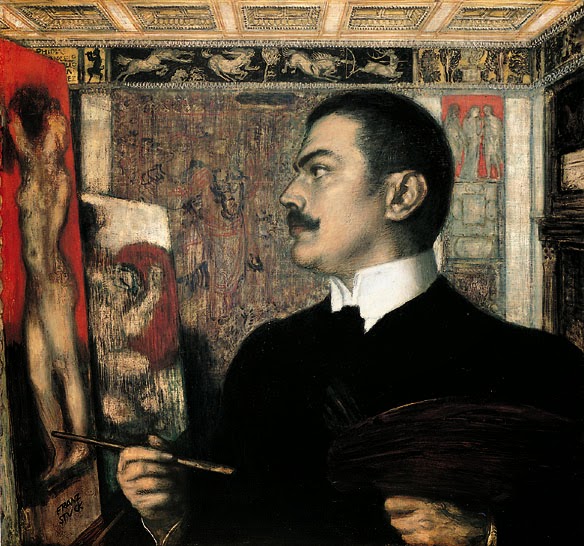 He certainly looks like anyone's idea of a decadent painter from the fin de siecle; Self Portrait of 1905. 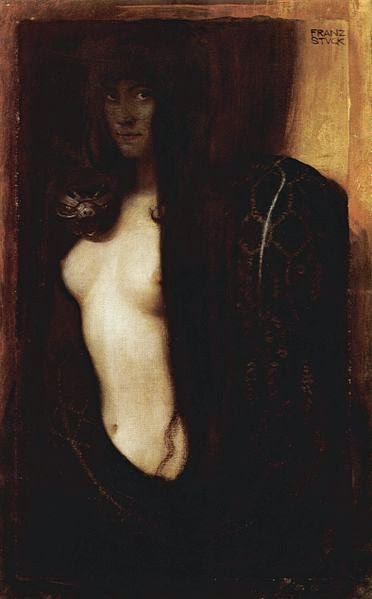 Like every other Symbolist, von Stuck had a thing for the femme fatale. This is Sin (1893), one of his most famous works. As to what all these dangerous women with snakes meant to von Stuck -- or, for that matter, any other fin de siecle painter -- we seem to be on our own. Freud, the subconscious, the emergence into art and dreams of sexuality suppressed by Victorian society, blah, blah. Is that all there is to it? I did find one interesting little video in which two critics noted that von Stuck treated all of his stock characters as individuals, with different mixtures of the victim and the villain. Also, they said, paintings like Sin invite the viewer in, placing you right next to the semi-mythical subject -- this is a symbol but also a person. That hints at a sort of thinking, in which von Stuck explored the relation between archetypal symbols and the particular model he hired to represent them, between the way we look at a marble goddess and way we look at a woman standing beside us. 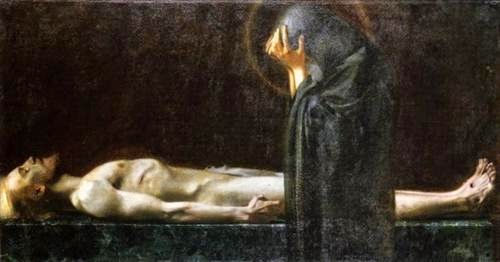 I also wonder about von Stuck's religious works. I think this Pieta is amazing, but was von Stuck a believing Christian or not? 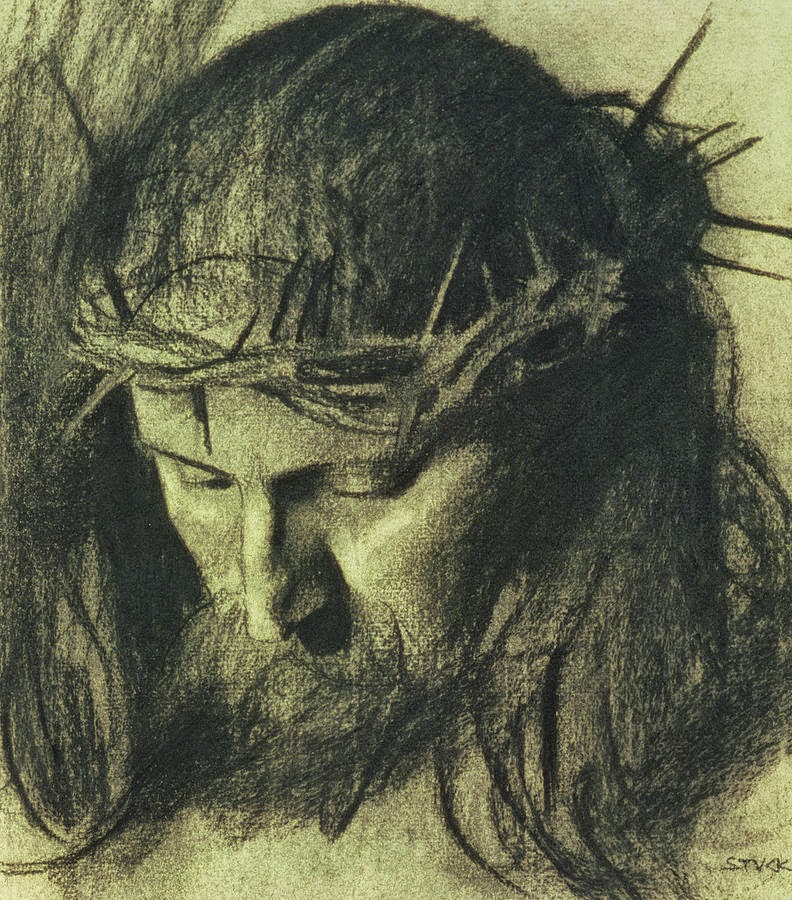 This head of Christ suggests that he might have been, but the impression I have gotten of von Stuck is of someone whose thinking was so dominated by images that he might have meant this more as an homage to the artistic tradition of the Man of Sorrows than as a statement of faith. 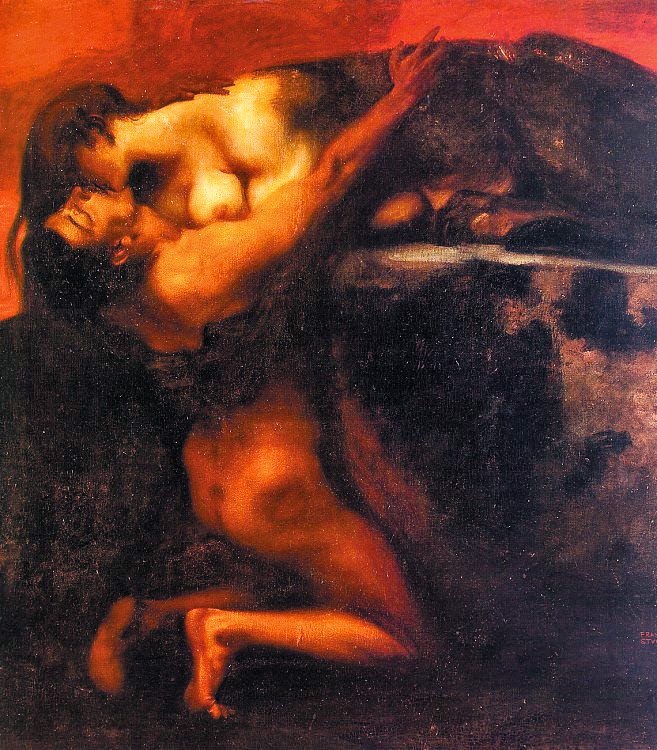 And if he was a Christian, what's with all the oh-so-beguiling temptresses? Was von Stuck simply fascinated by extremes, whether saint or sinner? Or even with the challenge of painting saints and sinners? Or was that just the fashion of the times? Was there anything to the Symbolist movement beyond boredom with the respectable peace and prosperity of nineteenth-century Europe? (The Kiss of the Sphinx, 1895). 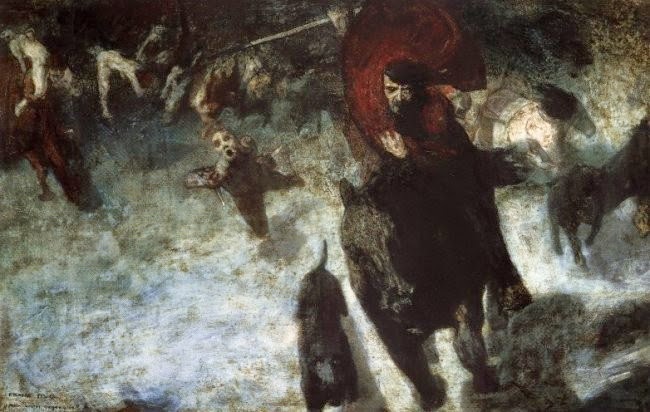 This is the painting of von Stuck's that is most reproduced online, another Wild Hunt. (Von Stuck painted all of his favorite scenes several times.) But people find it fascinating mainly because it was painted in the year Hitler was born (1889), and Hitler was himself fascinated with it, and some people think Wotan (the central figure) looks like Hitler, and therefore that this is some kind of prophecy. Certainly it is possible to see all of Symbolist art as a warning that all was not right in Europe. It is also possible to see it as an outcry against bourgeois domesticity by a whole generation of rebels with no cause but their own restless ambition. 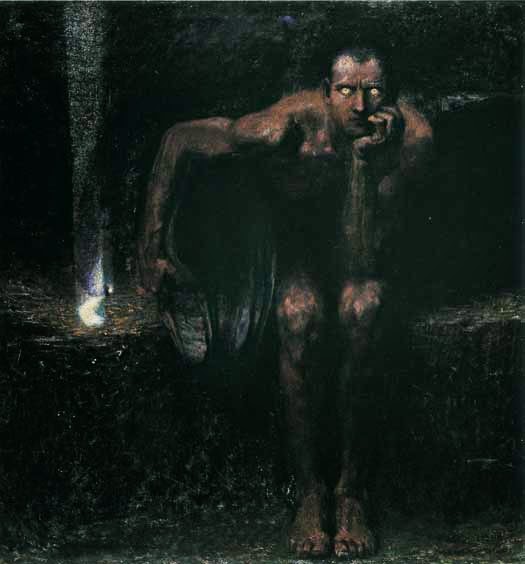 What does all of this art mean? (Lucifer, 1890) If it is Symbolism, what does it symbolize? Why do certain images have broad appeal in one generation and then fade away in the next? I have to think that artistic taste is connected to other things about the society, but looking at von Stuck's paintings I have the impression that the connection is not particularly robust. He was ambitious and very much a man of his times; the fashion of his times was for disturbing myths and subconcious turmoil, Dracula and The Scream and all those tragic operas; so that was what he painted.
Posted by John at 10:40 PM