Holman Hunt's Isabella and the Pot of Basil is for Sale 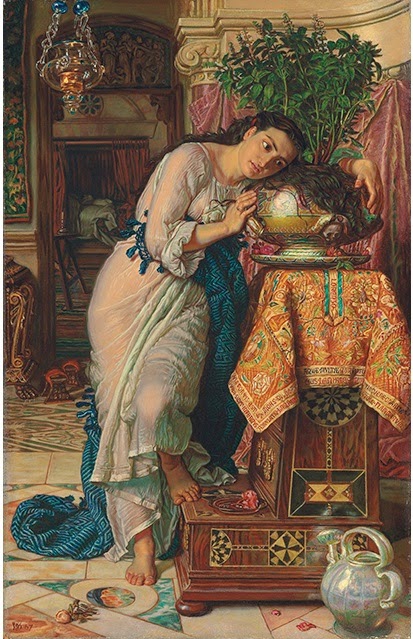 In 1868 Holman Hunt, one of the founders of the Pre-Raphaelite Brotherhood, painted two versions of this famous scene from an epic poem by Keats. (Based on a story from Boccaccio's Decameron.) In the story Isabella's lover Lorenzo is murdered by her brothers. She digs up his body, decapitates it, takes the head home and plants it in a pot of basil:

These paintings were a sensational hit, selling for the then huge sum of 1800 guineas -- at least a million dollars in today's terms -- and critic Cosmo Monkhouse once called this "the painting of the century." The larger version of the painting ended up in an English museum, but the smaller was bought by American railroad tycoon John Taylor Johnston and his been in the U.S. ever since. Now it is being sold at Christie's in London by the Delaware Art Museum, with an expected price of £5,000,000-8,000,000.

The museum needs to raise $19 million to pay off debts run up while expanding their facilities -- great idea, to enlarge your museum and then pay for it by selling all your best paintings.
Posted by John at 7:57 PM