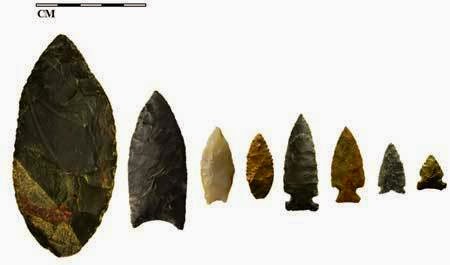 
On a remote forest riverbank in northern Idaho, archaeologists have uncovered evidence of human occupation going back more than 13,500 years, adding to the signs of an increasingly ancient human presence in the Northwest, and fueling the debate about how the region’s earliest settlers got there. The oldest evidence, found in test pits dug along the North Fork of the Clearwater River, includes a blade-like tool fashioned from a rock cobble and dozens of flakes left over from the tool-making process, known as debitage.

The artifacts were found in a layer of soil with charcoal that was radiocarbon dated to 13,740 to 13,490 calendar years ago. Perhaps more important, a few layers above those ancient finds, researchers found 19 detailed and distinctive stone points, fashioned in what’s known as the Western Stemmed Tradition. The oldest of them dating to just over 11,000 years ago, these points are the signature of a culture whose traces have been found throughout the Great Basin and the Northwest.

People are playing this up as a pre-Clovis find, but it actually fits perfectly with the Clovis First chronology. The earliest Clovis dates to around 13,500 years ago, and since Clovis arose in North America people must have arrived in the New World at least a century earlier. So a date of 13,600 or 13,700 in the Northwest is perfectly compatible with Clovis being the earliest culture in most of the Americas. Note also that this site places the Western Stemmed or Windust tradition after Clovis at around 11,000 years ago, which is where most Clovis First people want to put them, rather than before Clovis as suggested by the disputed finds at the Paisley Caves.
Posted by John at 2:03 PM