Environment Stewardship vs. Historic Preservation at the National Park Service 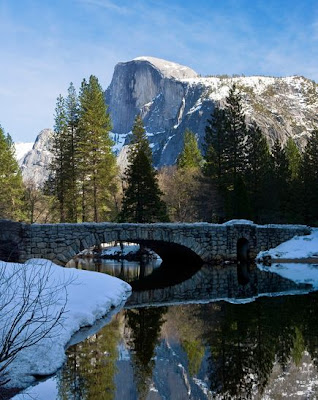 One of the historic properties on this year's "most endangered" list from the National Trust for Historic Preservation is the old bridges of Yosemite National Park. (Above, Stoneman Bridge, ca. 1928.) The National Park Service is considering tearing these bridges down as part of a plan minimize the impact of visitors on the natural ecosystem of the valley.

Which highlights a dilemma that the NPS faces in parks all over the country: how to balance historic preservation with environmental stewardship. One park I know well is the Chesapeake and Ohio Canal National Historical Park. This was founded, as the name indicates, as a historical park, but the historical heritage of the canal was a landscape of agriculture and industry. The industry has mostly disappeared on its own, except for a couple of power plants. But the park owns thousands of acres of land that was farmed during the canal's heyday. Almost all of this land has been allowed to revert to forest, except for a few hayfields, so that the landscape observed by people hiking or biking along the canal looks very little like it did in 1880. This is probably what most park visitors want, and the abandonment of farming adjacent to the Potomac has been a big help in cleaning up the river. But it is not the historic landscape. On many Civil War battlefields the opposite is happening, as the drive to restore the parks to the way they looked in the 1860s has led to the clearing of many wood lots. Some trees, though, will not be cleared, because the NPS thinks it is environmentally vital to preserve wooded buffers along streams, a belief that was not shared by farmers in the 19th century.

Balancing these concerns is a big issue for the NPS, but not a new one, and you should consider the listing of Yosemite's bridges by the National Trust as a shot fired in a long term political struggle over how best to do it.
Posted by John at 7:33 AM