Buried with a Cow 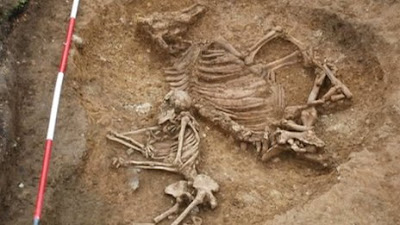 Anglo-Saxons didn't much go in for animal burials of any sort, which makes the recent discovery of a high-status woman buried with a cow all the more interesting:


Archaeologists excavating an Anglo-Saxon cemetery in Cambridgeshire say the discovery of a woman buried with a cow is a "genuinely bizarre" find.

The grave was uncovered in Oakington by students from Manchester Metropolitan University and the University of Central Lancashire. At first it was thought the animal skeleton was a horse. Student Jake Nuttall said: "Male warriors might be buried with horses, but a woman and a cow is new to us." He added: "We were excited when we thought we had a horse, but realising it was a cow made it even more bizarre."

Co-director of the excavation, Dr Duncan Sayer, from the University of Central Lancashire, said: "Animal burials are extremely rare, anyway. "This is the first animal to be discovered with a woman from this period - the late 5th Century - and it's really interesting that it's a cow, a symbol of economic and domestic wealth and power." There are only 31 horse burials in Britain and they are all with men. "It's also incredibly early to find any grave of a woman buried with such obvious wealth." The skeleton was found with grave goods including brooches and hundreds of amber and decorated glass beads. "She also had a complete chatelaine [keychain] set, which is an iron girdle and a symbol of her high status," Dr Sayer said.

Perhaps she was a priestess of some kind. Or maybe she just really loved her cow.
Posted by John at 11:57 AM