Archaeologists in Germany were excavating a grave in the late Neolithic village site of Profen when they encountered a mass of dog teeth. Careful excavation showed that they are all aligned and in a single layer. They must have been attached to a piece of leather or cloth that had long since rotted away. That hole in the middle was probably gouged by some unfortunate excavator who wasn't being very careful, until he noticed that his trowel was covered with teeth. He then carefully uncovered the rest. (Which is not a criticism -- if you always proceed with maximum caution, as if you might at any moment encounter some momentous find, you will never get anything done.) The graves dates to between 2,500 and 2,200 B.C.E.

The excavators think the dog teeth were attached to the flap covering opening to a bag, likely a bag that would have been attached to a shoulder strap -- a handbag, we would say. The excavators are calling this the oldest purse yet found, but you need not take that literally; who could possibly know whether an earlier one had been found somewhere in the world, the citation buried in Volume XXII of the Proceedings of the Somewhere or Other Anthropological Institute? It's certainly a cool find. 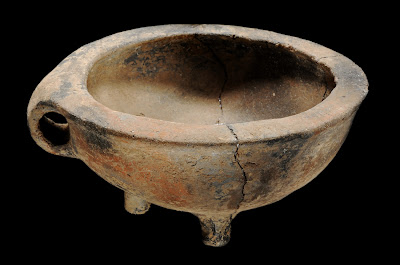 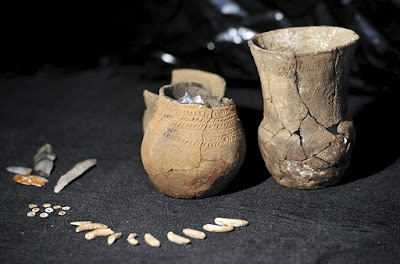 Researching this find I discovered that although the English press accounts all call this a Stone Age site, the original German sources correctly identify it as the Übergangshorizont zwischen der Steinzeit und der Bronzezeit, that is, the transition between the Stone and Bronze Ages. This culture is known in the best German style as the Schnurkeramik- und - Glockenbecherkultur. Above, some other artifacts from graves of this period at Profen.
Posted by John at 8:42 AM