Inequality in the European Neolithic? 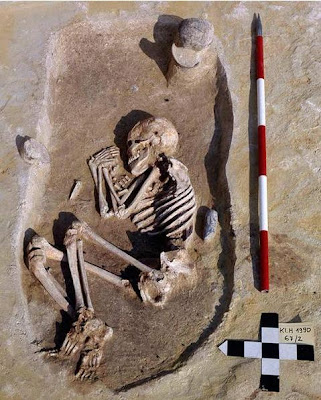 There is an interesting study in the news this week. A team of researchers has tried to study the origins of social stratification in Europe through the chemical analysis of human bones from cemeteries. They focused on the Linearbandkeramik or LBK culture, the first farmers across southeastern and central Europe (5500 to 4500 BCE). They studied the amount of strontium in the bones, which is a fairly sensitive indicator of what people were eating when they grew up. LBK people preferred to settle on light, silty, wind-blown soils wherever they could -- geologists call these soils "loess" -- and these soils have a different strontium signature than other nearby soils, especially those of hilly uplands. So people who grew up on the best farmland had chemically different bones than people who grew up on worse farmland. They found that people buried in the best locations had mostly grown up there, especially men. Men buried with stone adzes, which they take to be a sign of wealth, were mostly buried in regions with good soil and had grown up there. Men buried in less desirable areas had mostly grown up outside the areas of good soil, and they did not have stone adzes. Women were more variable, which they take to be a sign that the society was patrilocal, that is, women moved to live with their husbands, who mostly lived where they were born.

For example, among 310 burials the team analyzed, 62 featured adzes. But only one of the 62 skeletons from the adze burials had a strontium ratio in its teeth typical of a non-loess landscape, whereas all of the others were consistent with growing up on loess. Moreover, the variation in strontium ratios between adze skeletons was significantly lower than the variation between non-adze skeletons, suggesting to Bentley and his co-workers that the adze skeletons came from one kind of landscape, most likely loess, while the others came from a variety of other landscapes.

Which is very interesting. But what does it have to do with social stratification?  This shows, at most, that farmers who lived on good soil were wealthier than those who farmed poor soil, and for all we know it only shows that loess-dwelling people were into being buried with adzes. What if the people of the uplands had a slightly different culture, focused on raising sheep and hunting, and they preferred some other status indicator that has disappeared with time? Nobody has suggested that the non-loess farmers had poorer diets than their loess-farming neighbors, or more signs of heavy physical labor, or any other differences in their skeletons. Nor, so far as I know, is there much difference in the size of houses in LBK culture, or the quantity of household goods found in the houses, or any other status indicator.

This is not social stratification as it would develop in the Bronze Age. This is the grave of a member of a real elite: 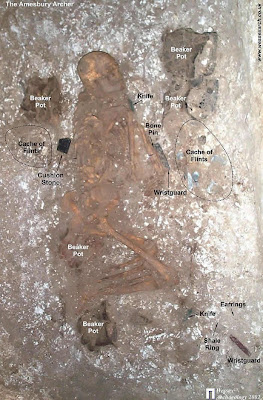 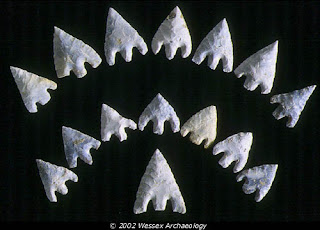 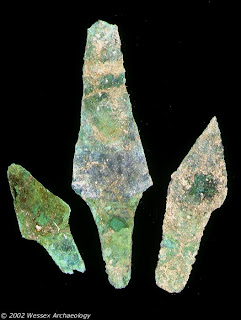 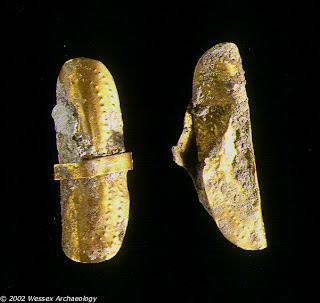 This is the famous Amesbury Archer, from near Stonehenge, buried with a whole slew of grave goods that included gold ear cuffs.

I don't see any sign of an aristocracy in the LBK burials. I see one third of the people who are a little richer than the other two thirds. In an aristocracy, one percent of the people are ten or a hundred times as rich as the commoners. LBK society was not stratified in that sense, and it is wrong to use the language of a stratified society to describe them.
Posted by John at 8:15 PM