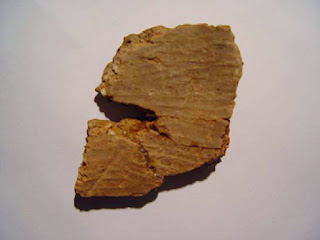 Not so long ago archaeologists thought that the invention of pottery was part of a Neolithic "revolution" that included agriculture, the domestication of cattle and sheep, and the first permanent villages, all arriving more or less together as a single package. Over the past thirty years, though, the evidence has mounted that these things happened thousands of years apart and have no necessary connection to each other. The latest piece of this puzzle is the discovery that people in northern China made pottery around 20,000 years ago, 10,000 years before the first evidence of agriculture in the region. The sherds above, from Xianrendong Cave, right now hold the record for the oldest found.

Wu, Bar-Yosef and colleagues gathered 45 samples of bone and charcoal from previously excavated soil layers at Xianrendong Cave. Radiocarbon measurements of bone and charcoal generated by three labs — one in China and two in the United States — point to initial human use of the cave from about 29,000 to 17,500 years ago. Xianrendong Cave pottery contains burn marks from being placed over fires and is 2,000 to 3,000 years older than pottery from another Chinese cave, which had previously held the age record. . . .

“Chinese pottery appeared long before animal domestication and has no obvious connection to the origins of agriculture or sedentary living,” remarks archaeologist T. Douglas Price of the University of Wisconsin – Madison.

East Asian hunter-gatherers may have set up seasonal camps 20,000 years ago, where they made pottery, proposes archaeologist Zhijun Zhao of the Chinese Academy of Social Sciences in Beijing. “Xianrendong pottery probably had many purposes, including boiling clams and snails,” says Zhao, who participated in a 1993 excavation of the cave. Numerous clam and snail shells were unearthed in pottery-bearing soil at Xianrendong Cave and at other ancient Chinese sites, Zhao says.

Until about 1700 CE, change in human history was always gradual, and "revolutions" actually took centuries or millennia to unfold.
Posted by John at 11:55 AM