A Soldier of Waterloo 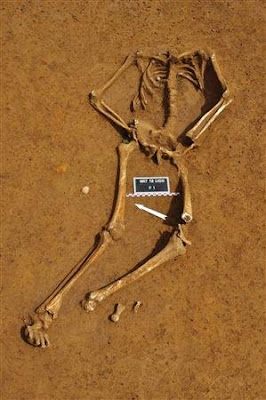 During grading for a car park near the Waterloo battlefield in Belgium, archaeologists were surprised to see a human skeleton emerge from the ground. 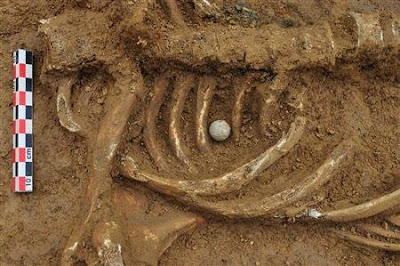 The musket ball in his chest and the early nineteenth-century coins in his purse show that he was a soldier in the great battle, in which 30,000 died. (That's more than twice as many as died at Gettysburg, the bloodiest battle of the American Civil War.) The site is a few hundred yards behind British lines, so the general view is that the soldier was British. 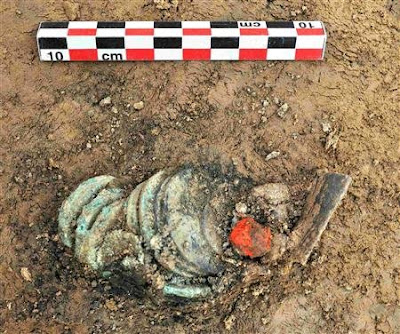 He must have been buried by his comrades, since anyone else would have taken the small pouch of coins in his pocket. He lost his head to the backhoe, but his hands and feet had already been lost when he went in the ground, which makes me wonder if he had been gnawed by dogs. 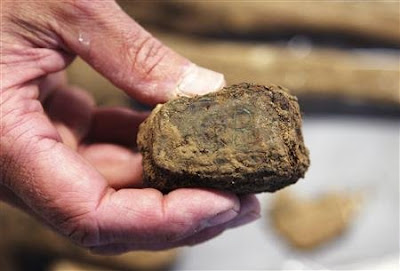 In his grave were a spoon and a small block of wood carved with the initials CB. The excavators think those were the soldier's initials, and they hope that when the spoon is conserved, it may prove to bear the symbol of his regiment.

The promotion of battlefields as tourist spots is a new thing in Europe. European history buffs have long been intensely jealous of the wonderful job the US has done preserving the battlegrounds of our Civil War; I have been told by three different Europeans that their countries have "nothing like" the battlefield parks of Gettysburg, Antietam, and Manassas. There has been a museum at Waterloo for some years now, and a tour. I guess the construction of this car park means the Belgians are gearing up for a big effort to promote the 200th anniversary of the battle in 2015.
Posted by John at 12:58 PM