A Pocket Sundial from Jamestown 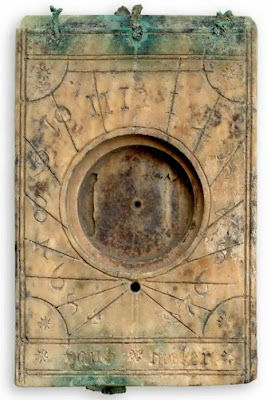 A wristwatch sundial seems like a joke from the Flintstones, but sundials you could carry in your pocket really existed. One was recently found at Jamestown. It was made at Nuremberg by Hans Miller, in the early 1600s and brought to America by one of those lazy gentlemen who gave John Smith so much trouble.

The problem with using a pocket sundial is that the things only work if they are aligned exactly north-south, which is easiest to tell at night; you have to watch the sun for a couple of hours around noon to find north from the sun's position. Rather than a practical timekeeper, such a device was more like a memento mori, the human bones or depictions of death that Europeans carried to remind themselves that life was vanity and death inevitable. Elizabethan Englishmen were still part of the old civilization that related religion to astronomy and the movements of heavenly bodies, and the movement of the shadow across the sundial was a common metaphor for the passage of time and the expiration of life.
Posted by John at 4:22 PM