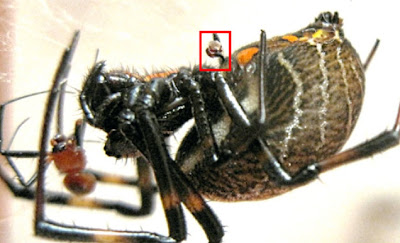 If this is a metaphor for something, I can't think of what it is. From Ed Yong:


To become both a lover and a fighter, the male spider Nephilengys malabarensis snaps off his penis inside his partner while they have sex. He becomes better at fending off other males who try to mate with her, because his now-lightened body can fight for longer without tiring. And while he’s playing the guardian, his detached genitals can continue pumping sperm into the female. Through self-castration, he gets more stamina, and he gets more stamina.

The males may have evolved the penis detaching strategy to avoid being eaten by the females:


She almost always turns on her partner during sex, and has a 75 per cent chance of eating him. She usually does this well before he has dispensed all his sperm, so by detaching his penis, he gets to continue having sex even while he’s being devoured.

And by detaching his penis the male becomes 9 percent lighter, thus the increased fighting stamina. Not to mention the decrease in distraction.
Posted by John at 8:45 PM