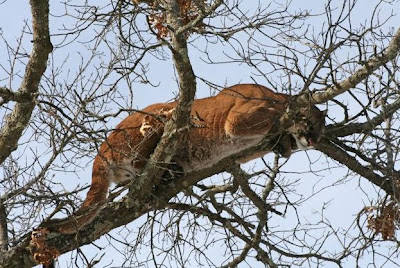 In a new study, wildlife biologists checked hundreds of purported cougar sightings and confirmed enough of them to show that cougars -- alias pumas or mountain lions -- are re-establishing breeding populations across the plains states. The researchers confirmed 178 sightings, using photographs, footprints, and DNA from scat and hair. There were 67 confirmations in Nebraska, which seems like a pretty healthy number. The picture above is from Spooner, Wisconsin.

Cougars are shy and secretive, so even if they live near you, you will probably never see one. But they love to eat sheep and young cattle, and they have been known to attack people, so their reappearance will create problems even as it restores some of the lost glory to our landscape.
Posted by John at 6:27 AM

there are some cougars here in the east as well. I know some of themerntate 1

The cougars we see from time to time in the east are young males, who wander far from home looking from territories. There is no breeding population here, but it looks like there may be in Nebraska, Minnesota, and a few other states.