I just love these polls. The latest from Pew shows that Americans say they want a smaller government, by 52 to 39%. And they are quite worried about the budget deficit.

But then if you ask them about all the things that the government actually spends money on: 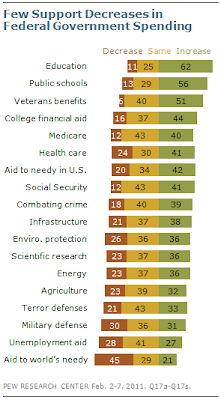 Once again the only thing the American people want to spend less on is aid to foreigners, which is an insignificant part of the budget.

As to taxes, Americans oppose all proposals to raise taxes on themselves, whether income taxes, gas taxes, or anything else, but they do support raising income taxes on rich people. (Presumably rich people oppose this, too.)
Posted by John at 11:53 AM