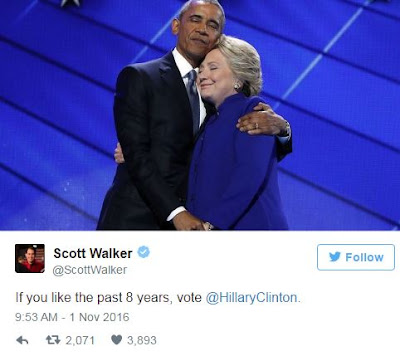 I am not and never have been a huge fan Hillary's, but I would much rather the next four years be like the Obama years than the George W. Bush years.

It's actually interesting that Walker thinks this is a good argument, given that the Obama years have seen an improving economy, a major decline in the number of people without health insurance, a continued reduction in the violence of our wars, and the cleanest, most scandal-free administration of my lifetime. I can understand not loving Obama but I can't see why anyone thinks his term has been some kind of disaster.
Posted by John at 12:42 PM

"I can understand not loving Obama but I can't see why anyone thinks his term has been some kind of disaster."

I'll give you a hint as to why most of those people think that: it's because a black man was elected president. For many people, that's all the reason they need.

For others, the problem is one of projection. Yes, overall things improved during the Obama years, but there are always exceptions. For people whose personal situations worsened - or even just for people whose situations stayed the same while the situations of other people around them appeared to improve - the fact that we elected our first black president is an easy thing to point to as a scapegoat for their personal discontent.

It's not logical, but it's all too typical. Many people simply can't stand seeing other people's lives improve without their own lives also achieving the same degree of improvement.