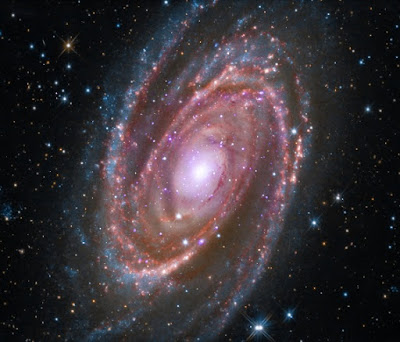 Nice article by Ethan Siegel at Forbes laying out the two competing theories to explain how galaxies rotate: dark matter and modifications to our theory of gravity. The problem is that galaxies behave as if they had much more mass than we can see. To make the math work out you either have to change the equations or to assume that 90% of the mass in a galaxy is something invisible to our detectors.

The problem with modified gravity is that nobody has hit on modifications that work in all cases. There is a modified version of relativity that gives you the right numbers for individual galaxies, but if you extend it to larger scales, like clusters of galaxies, it fails. Plus, general relativity is such a perfect theory that many physicists just hate to mess around with it by adding new terms.

The problem with dark matter is that no matter how hard we try, we can't find it. Siegel raises another problem I did not know about, which is that simulating the effects of dark matter requires huge, complex calculations that in some cases can't be solved at all, but that strikes me as a minor consideration compared to our inability to detect the stuff.

Personally I lean toward modified gravity, because I am always suspicious of undetectable entities. But anyway it's a great problem, and it may be one of the cracks in our current models that leads us to new and better physics.
Posted by John at 7:58 AM

"Plus, general relativity is such a perfect theory that many physicists just hate to mess around with it by adding new terms."

Newtonian physics seemed utterly perfect for centuries - until we finally had to admit that it simply couldn't properly cover all the edge cases, and therefor had to be wrong, or at least only mostly right.

Gravity is a bizarre force. I find it much more believeable to suggest that we simply haven't figured out all the kinks in how gravity works, particularly at extreme ends of the spectrum, than to suggest that 95% of the universe is undetectable by any means whatsoever.