The Restored Murals of the Stratford Guild Chapel 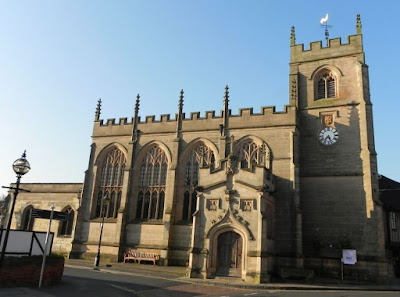 The Guild Chapel in Stratford-upon-Avon, England, is one of the town's most important medieval buildings and a regular stop on all historical tours of Shakespeare's birthplace. 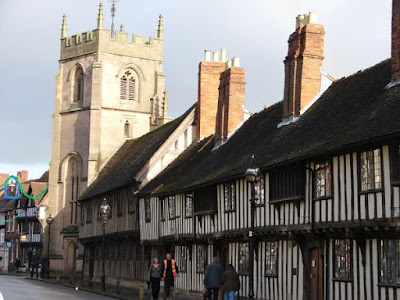 The guild constructed its first chapel in 1269, and parts of that structure are still present. But the current tower and nave were built over the course of the 1400s. 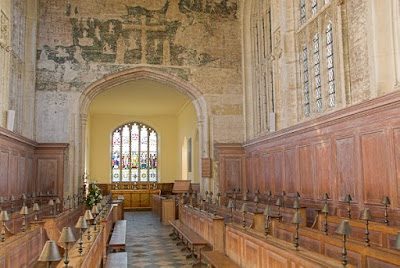 It has long been known that the chapel contained medieval wall paintings that had been covered with whitewash in the reign of Elizabeth I. Elizabeth was a Protestant, but according to the bizarrely rigid inheritance law in place at the time she became ruler on the death of her Catholic half-sister Mary. Elizabeth ordered


The removal of all signs of idolatry and superstition, from places of worship, so that there remain no memory of the same in walls, glasses, windows, or elsewhere within their churches and houses.

The good people of Stratford decided that this included the painting of Christ at the Last Judgement in their chapel. An interesting historical footnote is that it was Will Shakespeare's father, John Shakespeare, who as royal bailiff of Stratford would have received the order and been responsible for carrying it out. Some have read the careful whitewashing of the painting (many Catholic images were smashed or otherwise badly damaged) as a sign that he was either a Catholic sympathizer or a closet art lover. 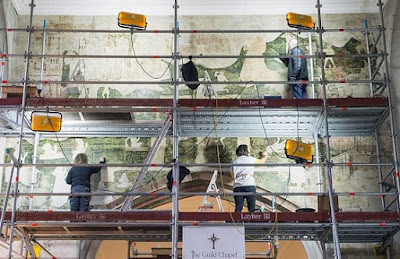 Now, thanks to a £100,000 grant from the Heritage Lottery Fund, the murals have been uncovered and restored. 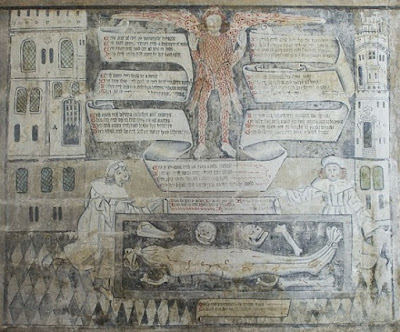 One of the most interesting paintings is this Allegory of Death, with extensive text in English. 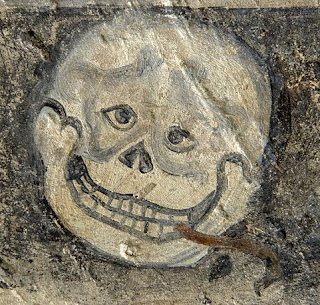 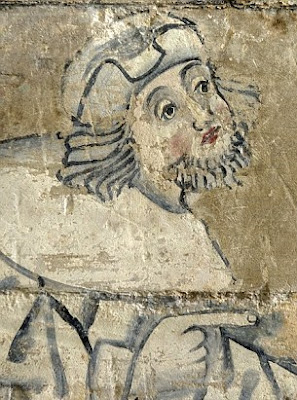 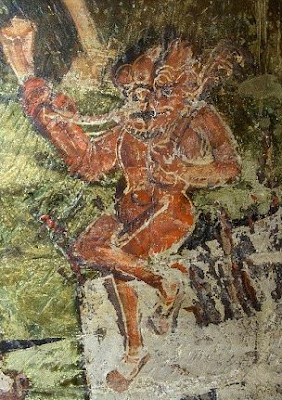 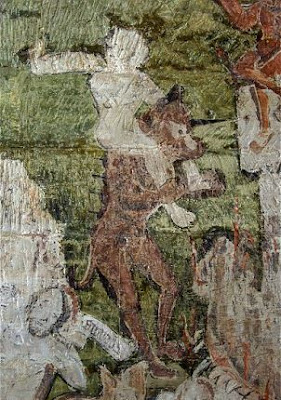 Details from the main panel of Christ in Judgement. 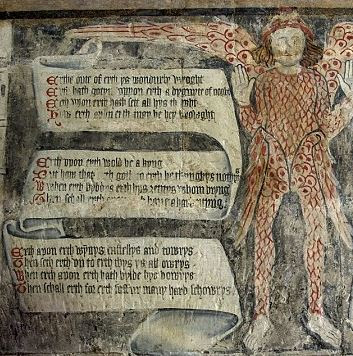 I have always found the way the English Reformation played out fascinating. Some people cared a great deal whether they were Protestant or Catholic, enough to risk death for attending secret ceremonies or even rebel against the crown. But most people seem not to have bothered much about it. When Henry VIII took control of the English church he required all the priests to swear an oath acknowledging him as head of the church, and almost all of them did. When his daughter Mary took the church back to Rome, most of the priests stayed in place again, and when Elizabeth went back to Protestantism more than 90 percent of the priests took the oath to her. 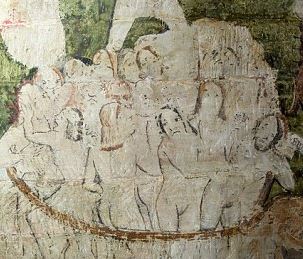 To me this says that the average early modern Christian was not particularly concerned about theology. On the other hand many English people informed on their neighbors who attended secret Catholic or Dissenting ceremonies, and prejudice against Catholics and Dissenters was quite strong into the late nineteenth century. What bothered people most was sins against community, and they did not much like it when their neighbors thought themselves too holy to attend the same church as everyone else. Whatever denomination it happened to be.
Posted by John at 5:30 PM

"What bothered people most was sins against community, and they did not much like it when their neighbors thought themselves too holy to attend the same church as everyone else. Whatever denomination it happened to be."

This general mindset is still hugely prevalent in much of the world, of course. It is one of the root causes for xenophobia, homophobia, sexism, racism, and similar.

"Loyalty" to the "community" - or rather, conformity to the whims of the select privileged elites within the community - is placed above the needs and wellbeing of individuals within the group. Failure to conform and to submit results in retribution and coercion.

Many millions of people effectively still live in tribal systems, and their lives are ruled to a staggering degree by modern tribal leaders. And when something new or different starts to happen within a community, these (often unfit) tribal leaders typically reject it out of fear, lack of understanding, and an indoctrinated reliance on tradition instead of rational problem solving.

When a parent rejects their child for being homosexual, they are acting on tribal instinct. When a church leader condemns members of other faiths, that is also a tribal behavior. When a school administration enforces a dress code or forbids certain innocuous behaviors, that too is tribalism in action.

It is all around us, unnoticed, taken for granted, accepted as normal, considered the natural way of things. Children are taught from an early age to remain "loyal to the tribe", and to put the desires of the tribal leaders above their own interests, or those of other groups, often with little regard to the cost or harm.

The instincts that allowed us to propagate our species to dominate all other life on the planet are still with us, and they're holding us back from being decent human beings. At the end of the day, despite everything we've accomplished in our history, we're largely still just clannish apes who fear what we don't understand and who rely on harsh negative reinforcement to invoke the mindless obedience necessary to perpetuate dysfunctional behavioral systems we don't fully understand and can't logically justify.