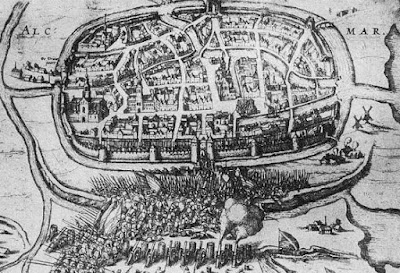 Historians who study medieval demography typically say that large towns were less healthy than rural areas. One reason they say this is that we know rural people were constantly moving into the towns, apparently at a rate much faster than towns were growing. So the idea has been that because of disease, town dwellers did not reproduce themselves. There is also other signs pointing in this direction; for example some studies of wills show that town dwellers were much more likely to have no children or other close relatives they could leave their property to.

Now there is some evidence that this may not have been the case. Osteoarchaeologist Rachel Schats examined three deposits of well-preserved bones from medieval Holland. One of these was for townspeople, from Alkmaar (1448 -- 1572 AD). Two were from rural settlements, the West-Frisian community of Blokhuizen (1000 -- 1200 AD) and the flooded village of Klaaskinderkerke (1286 -- 1570 AD) in Zeeland. Schats found no more evidence of disease in the urban sample. The number of what archaeologists call "stress markers" was the same in the two samples:

This is not definitive because of the usual caveat about all archaeological bone collections, which is that we have no idea what portion of the inhabitants ended up in graveyards; archaeologists pretty much never find enough skeletons to represent everyone in the community. But this is the data we have. If this turns out to be true, then we will have to come with another theory of why town dwellers did not reproduce themselves. Late marriage due to housing shortages? or due to a need to accumulate larger dowries?

Schat's study showed that the town dwellers of Alkmaar, a port, ate much more seafood than the rural people. They also had more tooth decay, which indicates they were eating more sugar, possibly in the form of beer.

But... they're comparing 15th century corpses to some as early as the 12th century. How does that even remotely begin to work, given the complex progress and distribution of epidemics over these time periods?

Also, don't stress markers in skeletal remains require a person to survive for a certain period of disease or malnutrition? If you catch the plague and die two days later, is that realistically going to show up on your skeleton? Wasting away slowly due to lack of nutrients certainly will as your body cannibalizes itself to try to survive, but I can't imagine things like major organ failure would leave much of a mark on bones.

There's also the obvious problem that we can only really glean information from corpses that were preserved, and the most dramatic depopulations of urban centers came in the form of epidemics which necessitated cremation and mass burials, if for no other reason than there were too many dead to bury.

And even in more normal times, one must remember that space in cities has always been at a premium, and thus proper burials in graveyards were always more expensive and more difficult to come by. And that same scarcity also led to the frequent practice of exhuming old graves to make room for the newly deceased, or of transporting corpses out of the cities to be buried elsewhere.