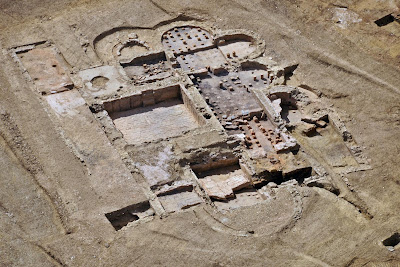 There were some awfully rich people in the Roman Empire. French archaeologists excavating a site near Dinan uncovered the home of one of them:


They discovered multiple structures arranged in a u-shape around a central courtyard with colonnaded galleries on three sides. This was the pars urbana (the residential section) of a great villa and this section alone covered 1,500 square meters (16,000 square feet).

The main part of the house was built on a plateau with a beautiful view of the Rance river. The secondary structure faced south and was constantly flooded by sunlight. The third structure may have been used as stable. The courtyard and areas surrounding the buildings were landscaped gardens. Coins found at the villa indicate it was originally constructed in the 1st century A.D., it was altered and expanded over the years and was in use at least through the 4th century.

The most impressive testament to how exceptionally luxurious this villa was is its personal bath complex. At more than 400 square meters (4,300 square feet), it included a shallow foot bath, a warm pool, a cool pool, and a large caldarium, the hottest room in the complex, that had both a hot tub and a sauna. Bathers would start out with the foot bath, then take a dip in the cold and warm pools. Once washed, they’d move on to the caldarium to work up a proper sweat. They’d wash again and get a massage in the warm room and finish with a pore-closing cold bath. The private homes of the rich often had bathing facilities, but such a large, complex one is rare.

That's not the villa in the picture above; that's just the baths. 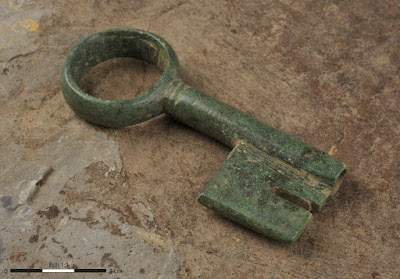 Key from the excavation, likely for a cabinet lock.