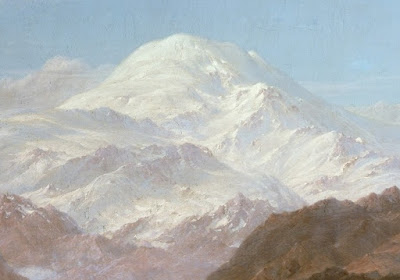 Frederic Edwin Church (1826 – 1900) was an American landscape painter most famous for the paintings of his travels to Central and South America. 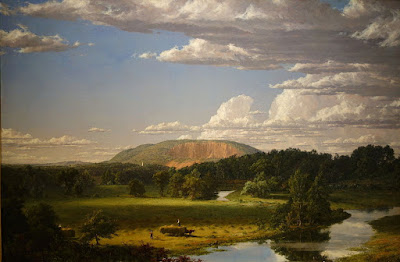 Church was born into a wealthy branch of an old New England family; when young Frederic showed an interest in painting, his father persuaded Thomas Cole, the most famous painter in America, to take him on as a student. (West Rock, New Haven, 1849) 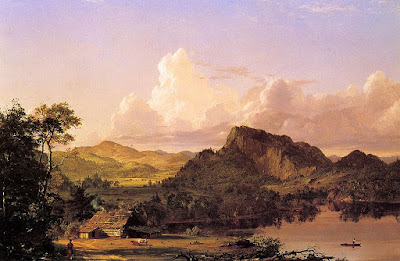 Thomas Cole was the founder of the Hudson River School, probably the most important artistic movement yet to take off in the young Republic. Church learned landscape painting from Cole and continued the tradition; people say he led the second generation of the Hudson River School. (Home by the Lake, 1851, which incidentally is one of the best ever renderings of an American log house; notice how the roof clapboards are held down by poles resting on top of them, rather than nails.) 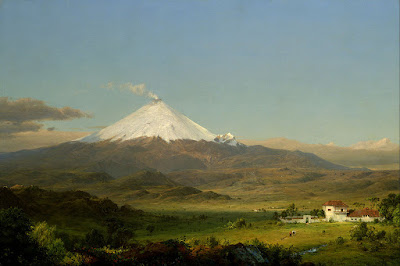 Besides learning to paint, Church studied science. He was especially fascinated by Alexander von Humboldt's famous narrative of his five-years exploring South America (1799-1804), which was published in the U.S. in 1852. In 1853, his training complete and a copy of Humboldt in his hand, Church sailed for Ecuador. He literally followed in Humboldt's footsteps, renting a house in Quito that Humboldt had rented and trying to recreate parts of his travels. He stayed for months, and in 1857 he went back for another extended visit. (Cotopaxi, 1855) 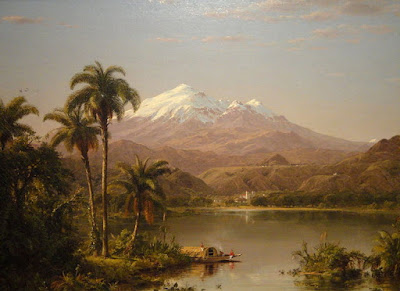 Church's South American paintings made his reputation, and he was soon one of the nation's most famous artists. Besides the beauty of the scenery Church tried to convey some of Humboldt's vision of the natural world. Humboldt saw nature as a great harmony, every plant and insect a unique thread in an immense and beautiful tapestry of stone, earth and life. He emphasized how perfectly fitted every organism was for its environment, and how life in the tropics was different in predictable ways from life in temperate zones. It was a good philosophy for landscape painting, leading to these rich, serene masterpieces. (Tamaca Palms, 1854) 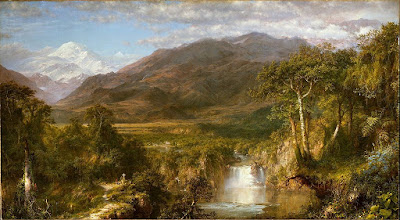 In 1859 Church exhibited In the Heart of the Andes, a monumental painting ten feet wide (3 m); 12,000 people paid to see it in New York and London. 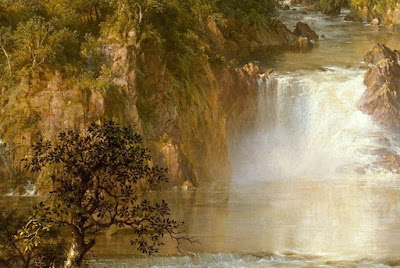 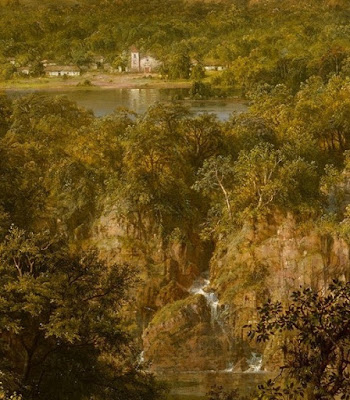 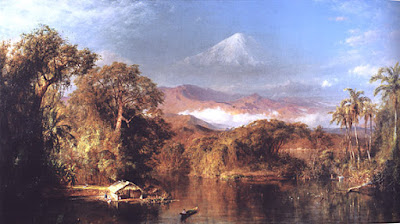 Chimborazo, 1864. This and other South American scenes painted in New York are based on sketch books Church carried with him on his travels, which are so delightful I will do a separate post on them. 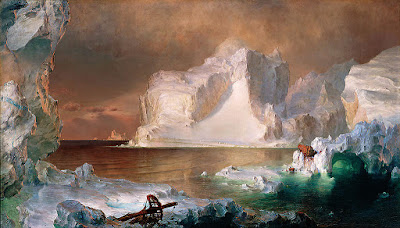 In 1859 Church financed his own expedition to the Arctic Seas, one result of which was this famous painting, Icebergs, 1861. 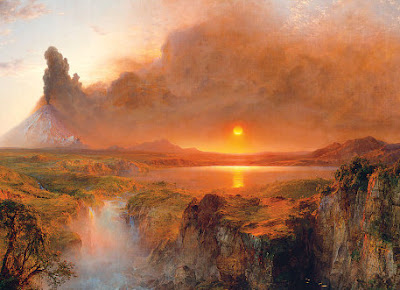 Another image of Cotopaxi, this time in eruption. Church never saw such an eruption. This is a work of the Civil War years, begun in 1862, and it is laden with symbolism. Opponents of slavery liked to describe the slaves as a slumbering volcano, ready to be awakened; here Church connects the horror of war to the eruption of that volcano. This image is shown on several web sites devoted to volcanoes (volcanoes have lots of fans on the web), discussed strictly as geology. And Church was, as I said, up to date with science and did his best to convey the awesome geological forces that built mountains. But audiences of 1862 were mostly thinking about slavery, war, and the wrath of a just god. 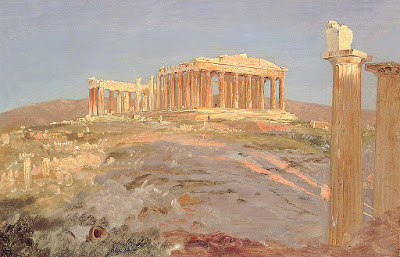 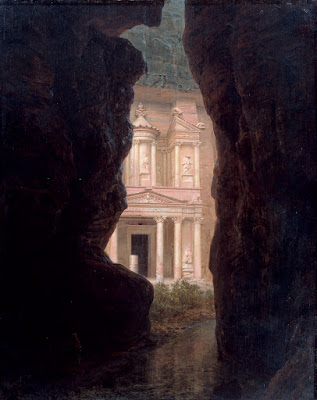 Church suffered his own tragedy in 1865 when his first two children died of diptheria within a week of each other. The grieving couple traveled to the Mediterranean for two years – Rome, Greece, Syria and Palestine – before returning home to start a second family that eventually included four more children. (Views of the Parthenon and Petra) 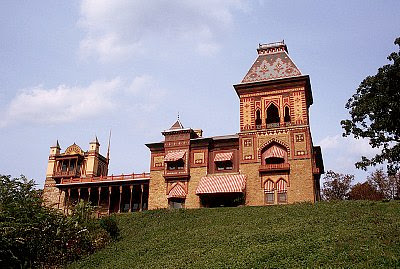 Back in New York Church worked with architect Calvert Vaux to build a house suitable to his station, located (of course) on a hill overlooking the Hudson River. Called Olana, it is now a historic site devoted to Church, his art, and other New York artists. 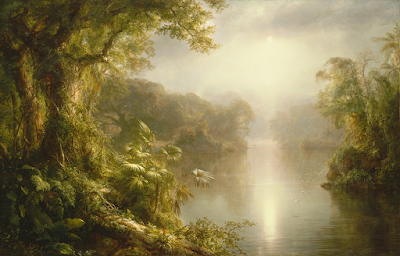 After 1870 Church began to suffer from arthritis, and his productivity slowed. But he still made wonderful paintings, some based on sketches and memories and South America and others of new travels. (El Rio de Luz, 1877) 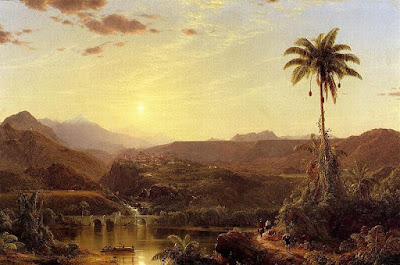 As is the way with artists who outlive the movements they created, Church was increasingly ignored and even scorned in his later years. But, hey, he was rich and still had that fabulous house, so if critics thought he was old fashioned compared to Impressionism and the stirrings of modernism, bah to them. Eventually the world would recover from the madness that gave us Cubism, Dada, and totalitarianism, and we would come again to recognize Church as one of the greatest American artists. (The Cordilleras, Sunrise) 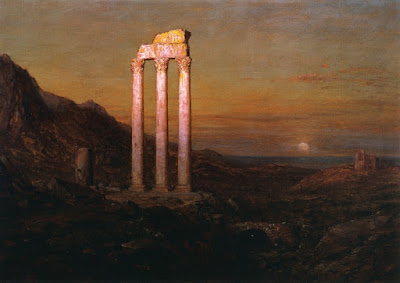 I am fascinated by the painting of West Rock, having worked in its shadow for 36 years and having driven *though* it most of those years (via Wilbur Cross tunnel).

I believe that's the view from the Woodbridge side; while there were modest homes built on the West River by the beginning of the 20th century, some of those meadows were still being farmed when I started teaching at Amity; the area was known as "the Flats" then, and the houses along the river flooded regularly.

Nostalgia triggered by a painting created almost 100 years before I was born!