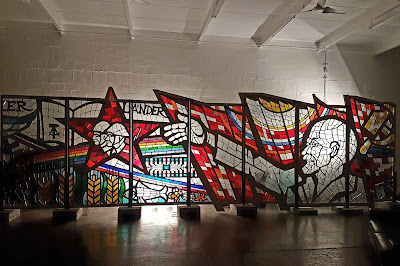 
An art historian in Germany has unearthed a three-ton, 65-foot-wide stained glass mural that was created in the early 1980s for the headquarters of the East German secret police, or Stasi, and had been forgotten in a shipping container for 24 years. It will go on sale at a temporary exhibition space in Miami to coincide with the Art Basel Miami Beach contemporary art fair next week, with a price tag of $21.4 million — which some historians said was out of line with its value.

The free-standing stained-glass screen was commissioned in 1979 by Erich Mielke, the head of the Ministry of State Security. It sat in a general purpose room in the agency’s compound, a high-security group of buildings in the former East Berlin that is now the Stasi Museum. The work was recently found by Thilo Holzmann, an art historian and dealer whose uncle had bought it in 1990 and put in storage.

The artist was Richard Otfried Wilhelm.

The title is "Revolution: Peace on Our Round Earth," a reminder that in the Leninist scheme the world would have peace when the revolution had succeeded everywhere. I would say the work itself is a reminder that communist apparatchiks had terrible taste. 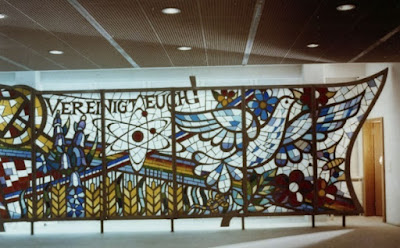 "I would say the work itself is a reminder that communist apparatchiks had terrible taste."

Taste is entirely subjective, of course. Naturally you are biased toward your own tastes because they stem from a mix of personal familiarity, self and cultural identity, and general societal indoctrination.

You didn't grow up with this art, it isn't part of your identity and values, and the people around you continually reinforce your views on it. Naturally you think it in bad taste.

If you grew up in the Eastern Bloc, were raised to earnestly believe and cheerfully support the values of the communist revolutionary culture, and had continual positive reinforcement of this kind of art, you'd of course love it and instead reject Western art as being in bad taste.