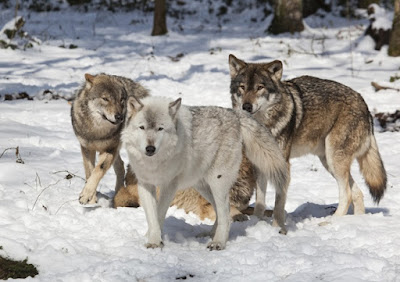 Interesting news item from the BBC, which reports that in Sweden, 150 people marched through their towns holding candles to protest killings of dogs by wolves. This is a long-running issue in Sweden, where the government regularly authorizes wolf culling in defiance of EU wolf protections. Right now people in some districts are saying there are too many wolves and more need to be killed. Most of the dogs killed in Sweden are hunting dogs running through the woods, which can trigger the instinct of wolves to defend their territories. But according to people interviewed by the BBC, pets have also been killed in or just outside towns.

This led me to do a bit of searching, and the internet is full of news items about wolves killing dogs, and even a few videos. Everyone agrees these attacks are on the rise. The state of Wisconsin has what looks like a serious and factual web page on the issue, and they note 41 cases of dogs killed by wolves already this year, as well as several serious injuries. The best estimate is that there are about 900 wolves in Wisconsin, the most since before World War II. The state's response is to create "wolf caution areas" and urge people to keep their dogs out of them.

I came across lots of stories like this one from Minnesota:


A hungry wolf roamed into Duluth on Tuesday and killed a family’s dog that its owner had taken on a walk along a popular trail.

A state conservation officer said that such an attack is rare, but that it is becoming more common because the deer population is not as plentiful in rural areas of northeastern Minnesota, leading wolves to prowl for food in more urban surroundings.

Leo, an 11-year-old golden retriever-corgi mix, was not on a leash and was about 15 to 20 yards from its owner on a short trail near Brighton Beach when the wolf pounced about noon, said Keith Olson, a longtime conservation officer with the Minnesota Department of Natural Resources (DNR).

Duluth seems to be overrun with wolves, with dozens of sightings. Because this is in Minnesota, where wolves are not classified as endangered, the state government has been trapping them and moving them to wilder areas.

I wonder where this is going. Two generations of Americans have been raised to believe in wolves as cuddly stars of the wonderful wilderness. A lot more parents read The Three Little Wolves and the Big Bad Pig than the original. But wolves are not cuddly and sweet; they are very dangerous. They kill and eat dogs, cats, sheep, pigs, young cattle, and whatever other sort of animal you keep around. Wolf attacks on humans are very rare, but Siberians and Americans Indians have old stories about such incidents. As wolf populations continue to grow, violent encounters will only grow more common. How many dead pets will it take before the pendulum starts to swing back, and thousands of suburbanites begin clamoring for wolf hunts?

Where I live, as in most of America, deer are a much bigger problem, eating every green thing and causing lots of car accidents. Wolves would help with that. But people react very badly when their pets are devoured, so I am not sure they are willing to be philosophical about cat and dog killings. Even killings by noble wild predators that everybody loves in the abstract.
Posted by John at 7:32 PM

The problem is a lack of understanding of the nature of wild animals, which is a product of a lack of exposure and education.

When you don't live around certain animals, you don't understand how they behave and how you yourself need to behave in relation to them.

Ignorance is at the heart of the issue. Anything can be dangerous if you approach it without the proper knowledge - but at the same time, dangerous things properly handled can be a massive boon to us. A child reaching out to touch a flame is going to get burned, but that doesn't mean we should demonize fire, seek to destroy it at every turn, and forsake the benefits it can bring us.

What is required is exposure and knowledge. People need to understand wolves, so they can understand how to live around them and prevent or minimize undesireable outcomes. In the same way that they're taught not to walk out into traffic on the street, they need to be taught ways to protect themselves from wolves (and in turn protect the wolves from human retribution).

The issue with pets is no different. You wouldn't let your dog roam freely in traffic, so why would you let it roam freely in wolf territory? Nature trails are beautiful, but they're also home to nature, and you need to respect and anticipate the dangers nature can present. You're not walking through a theme park - you're stepping into the wilderness, no matter how close it may be to civilization. If you take your dog into potential wolf territory, especially if you let it off the leash, then you are jeopardizing the dog's safety. If that's not a risk you are willing to accept, then simply don't take you dog walking in such areas.