What to Do with Ann Rice O'Hanlon's Mural? 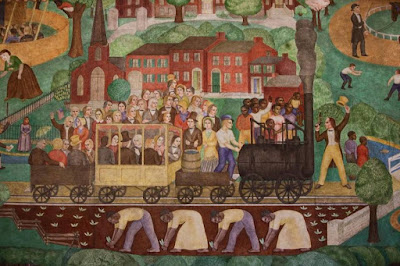 The University of Kentucky has covered Ann Rice O'Hanlon's mural of Kentucky history with white sheets while they ponder what to do with it. The action was ordered by the president, Eli Capilouto, after he met with black students and they discussed a wide range of things the university might do to make black students feel more welcome on campus. Capliouto issued a statement that said, according to the Post,


The mural “sanitizes history, painting over the stark reality of unimaginable brutality, pain, and suffering represented by the enslavement of our fellow women and men,” Capilouto said in a message to the university community. “We can no longer allow that to stand alone, unanswered by and unaccountable to, the evolutionary trajectory of our human understanding and our human spirit.”

Kentucky Poet/Farmer/Actvist Wendell Barry, who is related to the O'Hanlon, was incensed and wrote an angry Op-Ed denouncing the veiling. According to him, O'Hanlon was a liberal and nothing of a racist.


Ann painted the Memorial Hall fresco in 1934, when it took some courage to declare so boldly that slaves had worked in Kentucky fields. Nobody would have objected if she had left them out. The uniform clothing and posture of the workers denotes an oppressive regimentation. The railroad, its cars filled with white passengers, seems to be borne upon the slaves’ bent backs – exactly as the railroad near Walden Pond, according to Henry David Thoreau, was built upon the backs of Irish laborers.

I don’t believe Ann Rice O’Hanlon would willingly have painted “a painful and degrading personification of a false, romanticized rendering of our shared history.” I don’t think she did. I don’t think, to quote President Eli Capilouto again, that “the mural provides a sanitized image of that history” or that her “artistic talent actually painted over the stark reality” of slavery. . . .

I don't really have an opinion about whether the mural should stay; just because something actually happened doesn't mean there should be a painting of it in the student center.

But this saga is a reminder of how hard it is to talk about awful subjects like slavery, and how tempting it is to avoid controversy by just leaving out the hard parts. There is probably no description of America slavery that does not annoy somebody, and most of them enrage somebody. The topic is simply painful. But does that mean it should be ignored? If the mural depicted Kentucky's history without slavery or Indians, would that be ok? I certainly hope not. Because many of the most important topics in history are also the hardest to talk about, you cannot really study history without a certain thickness of skin. You must face facts, and many of the facts are gruesome.

Again, this doesn't mean there should be murals of slavery, the Holocaust, the Trail of Tears, or the potato famine prominently displayed in university buildings. That is as much a matter of taste as anything, and I happily leave the decision to the university community. But if you want to understand the world, you have to learn about many terrible things, including things done to and by your own ancestors. There is no avoiding this, however much you might want to.
Posted by John at 6:11 PM

Art deserves to exist even if disliked, while at the same time students should have a say in what art they want in their student center.

The most obvious and simplest answer is of course to move the mural to a new location - probably to storage at first, and likely then to a private collection of some sort.

Of course I strongly suspect absolutely no one directly involved is going to want to take that particular route. Too easy, I suppose. Too reasonable.

As Bill Watterson once acerbically wrote, "A good compromise leaves everyone mad."