Mars One is not Feasible 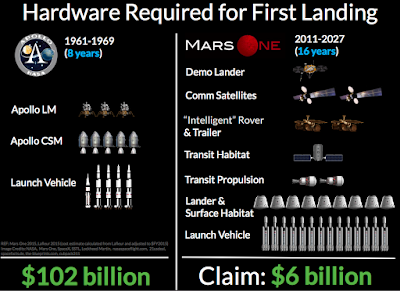 On August 13 there was a debate over the feasibility of the Mars One mission between Mars One executives and two MIT students, Sydney Do and Andrew Owens, who took the position that the Mars One plan can't work. According to Tech Insider, the students won easily:


The final moments of the debate made it pretty clear who won: the MIT students.

They circled back to the point that the Mars One mission is fundamentally unsustainable because the cost grows as the number of people living on Mars increases. Both parties agreed a critical step is to figure out a way to efficiently build things and grow food on Mars.

But the most pressing problem is that everything about Mars One's plan is still preliminary and needs further research and development.

"The topic of this debate is 'Is Mars One feasible?'" Do said. "But these projects are very complex. It's a house of cards, if any of them them don't work, then the whole thing fails."

"If you're still developing concepts, then you don't really have a plan," he added.

It seems safe to conclude that in its current state, the Mars One plan is not feasible.

Love that graphic Do and Owens came up with. It compares the hardware of the Apollo mission and its actual cost in 2012 dollars with what Mars One says they can get for $6 billion. Ha ha.
Posted by John at 7:35 AM

They may not get to Mars, but their TV ratings will. *eyeroll*

Space travel for anything other than research purposes is an absurdity. But people desperately want to believe in the Shiny Space Future we've all been promised since the 1950s in one form or another.

The Jetsons might be laughable to the modern masses, but only because it sports a cliche retro aesthetic instead of the slick new futurism of the present day. The substance of the space travel pipe dream remains the same: a glamorous and somehow magically inevitable pie-in-the-sky future full of technological wonders that will solve all of our problems.

The world around us frightens and concerns us, so we turn our gaze skywards, thinking that if only we can spread out among the stars, somehow life will suddenly be amazing and wonderful. People get breathlessly "inspired" by the trumped up notion that we are somehow meant to inherit the universe - that we shall receive it as our "Manifest Destiny". Or perhaps they simply focus too strongly on the beauty of the cosmos, and in doing so become remarkably willing to overlook its cold lethality and inaccessibility.

Yet despite the dreaming, space is like Mount Everest - distant, deadly, and devoid of practical value. Only a very small number of people will ever actually go there - almost always those who are both rich and fanatically driven - and of those, a great many will die trying to achieve something completely senseless in the name of petty bragging rights and public prestige for themselves.

The pursuit of this madness is the ultimate form of luxury and hubris - a pathetic, selfish, and pointless attempt to elevate the human ego above nature. It is a brute form of "conquest", without even the ancient tribal rationale of practical gain to justify it. It is a vain grasping at the immaterial, born from delusion, and cloaked in the stolen trappings of "inspiration" and "achievement". People treat it as a great accomplishment rather than the colossal waste that it is. They revel in the "success" of those who go and return alive, conveniently forgetting the frozen dead that will never be recovered.

Humanity might someday get off this rock. But only in the sense of sending a pitifully small and fragile offshoot of our species into the void, and only at colossal costs. Our nearest stellar neighbors are so far as to make even mere communication between us unfeasible - the time lag would render two-way conversation impossible; one-way monologuing difficult and confusing at best, while ultimately of little value.

They could not return to us anything tangible - at best, they could offer us a stupendously pitiful degree of parallax in our observations of the universe at large, but to what possible point and significant purpose, I cannot for the life of me imagine. Whatever possible intangible benefits there might conceivably be, it would be staggeringly difficult to justify the expenditure required to achieve it.