A Mass Grave of Neolithic Victims 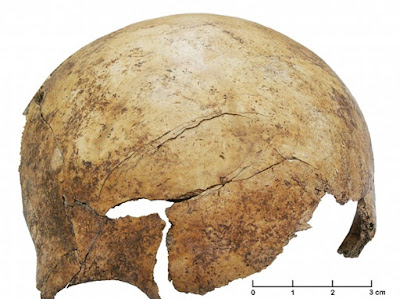 Victims of what is not exactly clear. But the 26 bodies excavated from a 22-foot long (7 m) trench near Schöneck-Kilianstädten in western Germany were killed with violence, and then for good measure some of their bones were smashed. Two were found with arrowheads within their bodies, and many, including the child whose skull is above, showed signs of blunt force trauma. 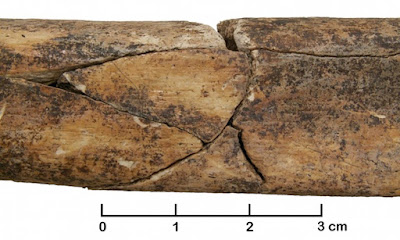 This leg bone was intentionally smashed, probably after death. The event took place around 5,000 BCE. The trench was found during highway construction because it was not in a settlement -- easy to find because of the pottery and other artifacts left lying around -- but out in what would have been the middle of nowhere.


Christian Meyer, an archaeologist who led the study at the University of Mainz, believes the attackers meant to terrorise others and demonstrate that they could annihilate an entire village. The site of the mass grave, which dates back to about 5000 BC, is located near an ancient border between different communities, where conflict was likely.

“On one hand you are curious to find out more about this, but also shocked to see what people can do to each other,” he said.

Like a good scientist, Meyer is cautious about what actually happened at Schöneck-Kilianstädten:


“This is a classic case where we find the ‘hardware’: the skeletal remains, the artefacts, everything that is durable we can find in the graves. But the ‘software’: what people were thinking, why they were doing things, what their mindset was at this time, of course was not preserved,” Meyer said.

In this case the simple facts are quite powerful: slaughter, mutilation, unceremonious burial This massacre took place around the same time as the strange events at Herxheim and other sites in Germany and Austria, around the end of the Early Neolithic. That period saw a significant decline in the population of central Europe, and evidence is mounting the that era experieced widespread, horrific violence.
Posted by John at 9:14 PM