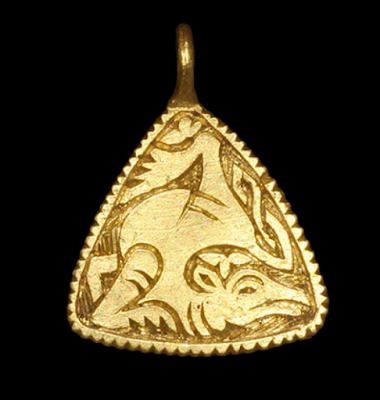 I always have trouble figuring out what animals are depicted in art like this. It's clearly a quadruped, but what precisely? A goat? A deer? Something more mythical like a dragon or wyrm? A distorted understanding of a real but exotic animal like a lion?

Are the notches on the feet supposed to be claws? Or maybe split hooves? Is the mouth supposed to be a muzzle? A beak? Is the line that defines the mouth representing teeth protruding down from the upper jaw, or is it an open maw without actual detail? Why is the brow so prominently delineated, particularly in contrast to the eye? What are the bands at the top of the legs supposed to be? Fur patterns? Overlapping reptilean scales? Maybe even wounds?

What is that moth-like shape above the head and ear? And the similar section above the rear foot? They aren't just dead space - everywhere else, dead space is created by etching-in the entire area, like in the corners and between the legs and belly.

Why the bizarre choice of composition? Sure, the form of the pendant itself contricts the art that can fit inside it, but why such a large image in such a contorted posture instead of a smaller one that fits more gracefully? There must have a been a reason for that choice of appearance - it must be purposeful, no?

Personally I can't decide whether it look more like some twisted draconic serpent, or the mangled, partially decayed corpse of something like a deer, or maybe a dog.