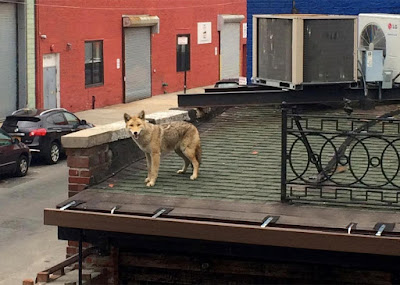 Now that coyotes are becoming regular residents of North American cities from coast to coast, what effect are they having on their local ecolosystems? Stanley Gehrt of the Cook County Coyote Project explains:


“Early on, just by fluke, we documented that coyotes were having an impact on Canada geese.” As many people living in the Midwest and beyond will attest, Canada geese have become habituated to cities, quit their migratory route, and settled down to overpopulate urban and suburban areas, making an all-round nuisance of themselves. But once the coyotes got established, Gehrt told me, “the geese population growth went down to almost zero.” His team used tiny spy cameras to investigate why, and discovered that, every spring, coyotes were snatching the geese’s eggs. “It’s a good example of how coyotes could be having a huge impact—a positive impact—right under our noses.”

This was just the beginning, though. Despite the fact that monitoring rodents is far more challenging than geese, studies by other researchers in rural areas have suggested that removing coyotes causes rodent populations to swell. Gehrt and his team have just completed a large-scale feral cats study, which found that coyotes are repelling them from natural areas within the city. “That has a positive impact on native fauna,” Gehrt says—cats kill a lot of birds. Recently, researchers at the Illinois Natural History Survey have also been considering white-tailed deer, which are responsible for a remarkable number of automobile accidents; findings suggest that coyotes are making a dent in their population through fawn predation. Out of 15 fawns collared this season, Gehrt says 11 have already been taken by coyotes.

In general, ecosystems evolved with top predators, and the removal of large predators distorts them in all sorts of ways. So the return of coyote-wolf hybrids may have profound impacts.

More on the Cook County Coyote Project here.
Posted by John at 7:41 AM