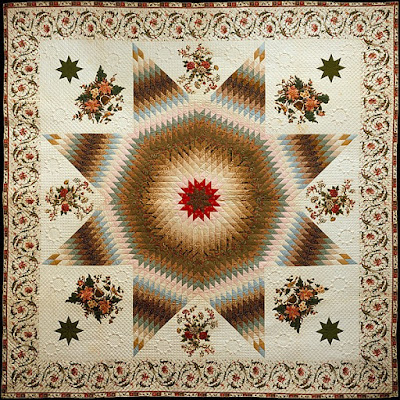 Laurel Thatcher Ulrich is one of the greatest living historians, a master at bringing back the ordinary lives of the American past. She is the author of two amazing books. The first is A Midwife’s Tale: The Life of Martha Ballard based on her diary, 1785–1812 (1990), which is the richest and most compelling life of any ordinary person I have ever read. It achieved the rare feat of winning both the mainstream Pulitzer Prize and a raft of academic prizes in women's and social history. The second is The Age of Homespun (2001), which I have just finished reading. What I love about Ulrich's work is that she offers general insights into the past without making generalizations. She never says that "women" did this or "Indians" did that; she tells us about particular women and particular Indians and their families and neighbors and friends until a profound understanding arises from the mass of details. 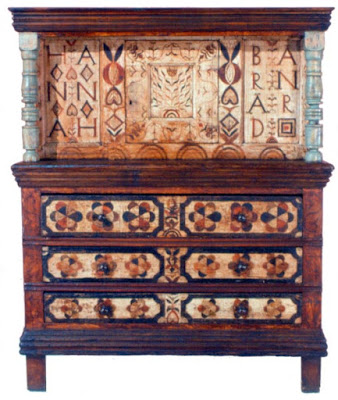 The Age of Homespun is an unusual work of history, structured around an imaginary museum display containing ten objects. All of them were made by ordinary New Englanders between 1650 and 1850. All but one (the chest above) were made by women, and the chest bears a woman's name and was passed down through several generations of women. Three were made by Indians, the rest by Europeans. Starting out from an examination of each object, Ulrich explores who made it, and why, and how the maker learned her skills, and how the work was related to the maker's household economy and the broader economy of New England, and how it was passed down through the family, and why it ultimately came to be preserved in the collection of some museum or historical society. We meet all kinds of women, from poor cottagers on the margins to governors' wives. Some of the book is not very exciting -- although much is more interesting than a book about homespun cloth and hand-made baskets has any right to be -- but as a whole it is a revelation. From a kaleidoscopic array of sources Ulrich has assembled a crystal-clear window into the past lives of ordinary women, through which I gaze in wonder. 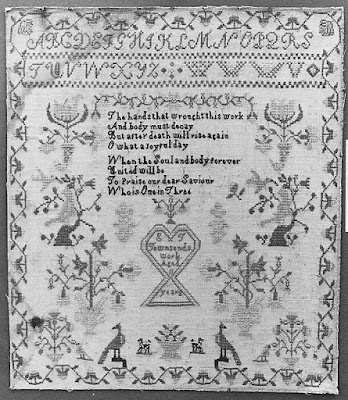 Ulrich has spent her working life among the women of old New England, and she writes about them as if she had known all of them and watched them grow up from girlhood. Her main source is their their diaries and letters, and those of their male relatives. To these wonderful documents she adds court records, business papers, newspaper stories and advertisements, sermons, speeches, and more. She does amazing things with the objects themselves, for in her hands they tell stories: tales of techniques transmitted from mother to daughter, or across oceans, or across the barrier dividing Indians from Europeans; tales of gift exchanges and marriage rites; tales of inheritance and memory. I never knew there was so much to learn from a bit of weaving or embroidery.

The importance of these objects for women's history is great. Ulrich has nothing to say about women being silenced or excluded. Her women do speak, not just in their diaries but with their needles and looms; they drive the economy with their efforts; they show off their skills; they interact directly with other women, neither hidden behind their husbands nor cut off from the cash economy. They earn their own money and win prizes in their own names. Their best work is beautiful, and they know it. They could not vote, but they did participate in politics, for example through patriotic spinning contests; the embargo politics of the Revolution and the War of 1812 would hardly have been possible without the home manufactures of women. Of course Ulrich understands how grueling this work could be, and all the pressure women were put under to be models of virtuous productivity. But there is no denying the joy some women took in their work, and the pride they felt in beautifully made cloth. 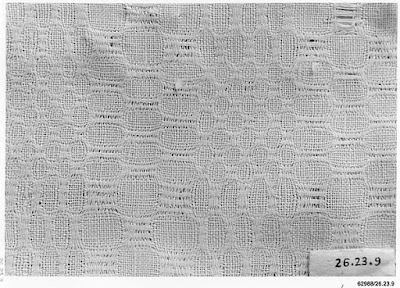 If you check out books and web sites devoted to debunking myths about the American past, you will often encounter the "myth" of homespun. But it was no myth; in the eighteenth century American women did spin, weave, knit and sew a huge amount of clothing and bed linen. In the nineteenth century first the spinning and then the weaving were taken over by machines, but women did not stop working with cloth. They simply shifted to other forms, such as quilting, embroidery, knitting, and the sewing of ever more elaborate clothes. Working with cloth was a major part of life for millions of women, and through the lens of their work Ulrich shows us much about them, their dreams, their struggles, and their place in the world of early America.
Posted by John at 6:22 AM