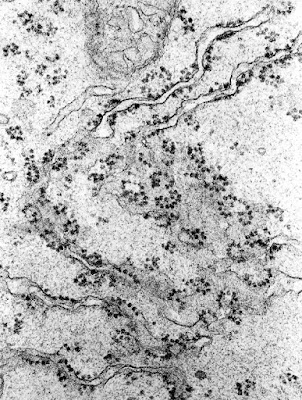 Ribosomes are one of the many molecular wonders that make life as we know it possible. These are the tiny factories where proteins are made; a bacterial cell contains around 20,000 ribosomes, but there may be as many as 10 million in a rapidly growing mammalian cell. (In the images above, the dark dots are ribosomes; this is all you can see of them with an electron microscope.) 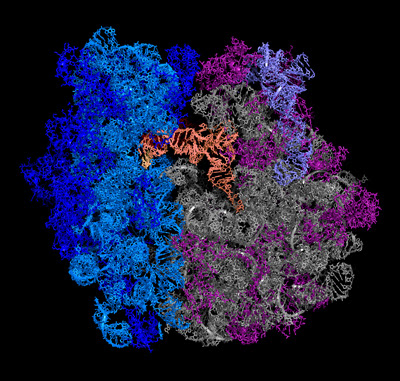 Understanding in detail the structure and function of the ribosome has been one of the great triumphs of microbiology; the 2009 Nobel Prizes were given to people involved in this work.  Ribosomes are about 2/3 RNA and 1/3 protein, snarled together in a fiendishly complex shape. Bacteria and eukaryotic cells (cells with a nucleus) have distinctly different ribosomes, and one thing we learned from the recent work is that some antibiotics work by clogging bacterial ribosomes.

The process of making proteins in a cell goes like this:

If you want more detail than that, the British Society for Cell Biology has it.

For what follows you need to know that each ribosome actually has two parts, which in eukaryotes are called 60s and 40s. The smaller piece binds to the mRNA, while the the protein is assembled on the larger piece. The two halves do not have to stay together; in fact they often come apart and recombine with other pieces.

From the time that we first discovered what ribosomes do, scientists have imagined taking over this amazing machinery to make custom proteins or other molecules. You can get cells to make new proteins by altering their DNA, the way we get yeast to make vanilla and so on. But this only works if you can find a gene for that protein that will work in your target cell's genome. This excludes many proteins that one might like to make, including completely novel, unnatural ones. Which is why there is continued interest in directly hacking the ribosome.

So for a decade now scientists have tried creating mutant ribosomes and inserting them into cells, hoping that the cells would then produce the desired proteins. But because the two halves come apart and recombine with others, the hacked ribosomes kept combining with native ribosomes in failed combinations that could make neither the natural nor the hacked proteins, and the cells stopped growing or even died.

And now this week's news:


The solution, Mankin and Jewett's team decided, was to marry together two engineered subunits. It was unclear whether the approach would work: it was thought that ribosomes exist in two distinct units because it is necessary for their function.

The researchers used a strand of RNA to tether the large and the small subunit together, toiling for months to get the length and location of the link just right so that the machine could still function. “We certainly came close, several times, to saying ‘OK, biology wins',” says Jewett.

The team screened its tethered ribosomes in Escherichia coli cells that lacked functioning RNA, and eventually found engineered ribosomes that worked well enough to support some growth, albeit slow. They then tested their platform to confirm that a tethered ribosome could operate side-by-side with natural ribosomes.

The result unlocks a molecular playground for bioengineers: by tethering the artificial subunits together, they can tweak the engineered machines to their liking without halting cell growth. 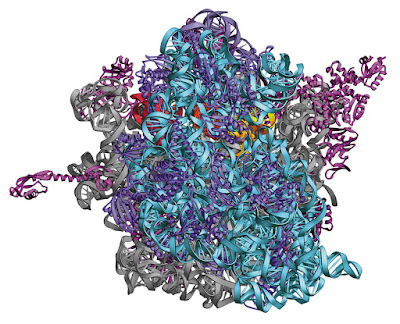 I don't know that this discovery will end up being very important; I simply find it amazing that we understand life at the molecular level well enough to do things like this.
Posted by John at 8:17 AM