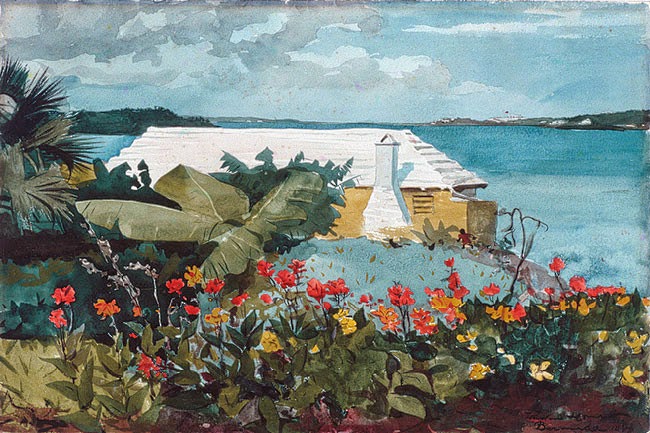 Winslow Homer (1836-1910) was and is one of America's most famous painters, and one of my favorites. His body of work is huge and full of wonders in many different veins. The National Gallery has a nice summary of his early career:


Winslow Homer was born in Boston, the second of three sons of Henrietta Benson, an amateur watercolorist, and Charles Savage Homer, a hardware importer. As a young man, he was apprenticed to a commercial lithographer for two years before becoming a freelance illustrator in 1857. Soon he was a major contributor to such popular magazines as Harper’s Weekly; in 1859 he moved to New York to be closer to the publishers that commissioned his illustrations and to pursue his ambitions as a painter. 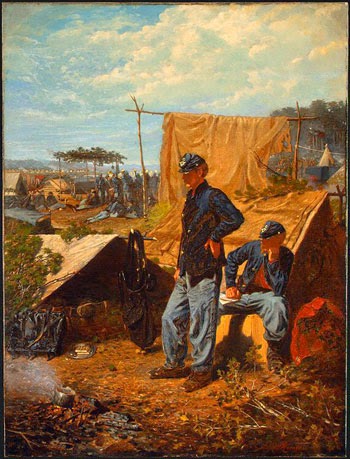 Homer spent much of the Civil War sketching for Harper's. Most of his war work was forgettable and quickly forgotten, although the historians say he grew as an artist from the constant work. Home Sweet Home, 1863. 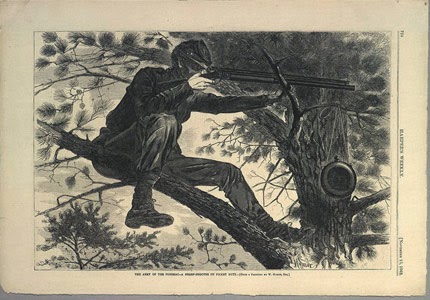 Here is a historical oddity, quite possibly the first work of art to depict a sniper with a telescopic sight. Sharpshooter on Picket Duty, 1862. 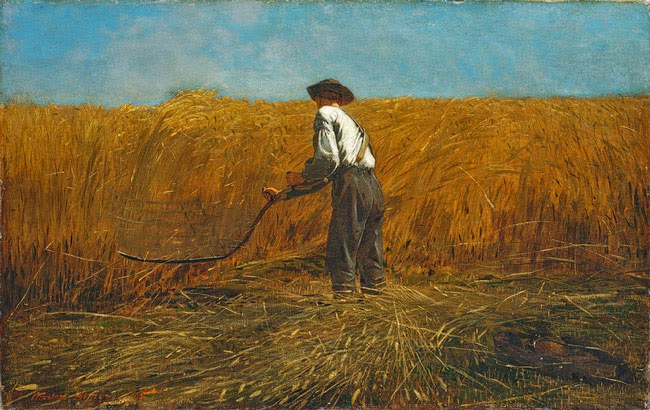 At the end of the war he painted what I regard as his first masterpiece, The Veteran in a New Field. Homer began this work in the summer of 1865, as the nation meditated on the Union's bloody victory and the assassination of Lincoln. It is drenched in symbolism -- the Union veteran has returned home to take up farming again, but the scythe in his hand suggests the grim reaper, and I at least always imagine that he is remembering his awful days in other, bloodier fields. Yet the amazing wheat crop before him suggests a hopeful future. 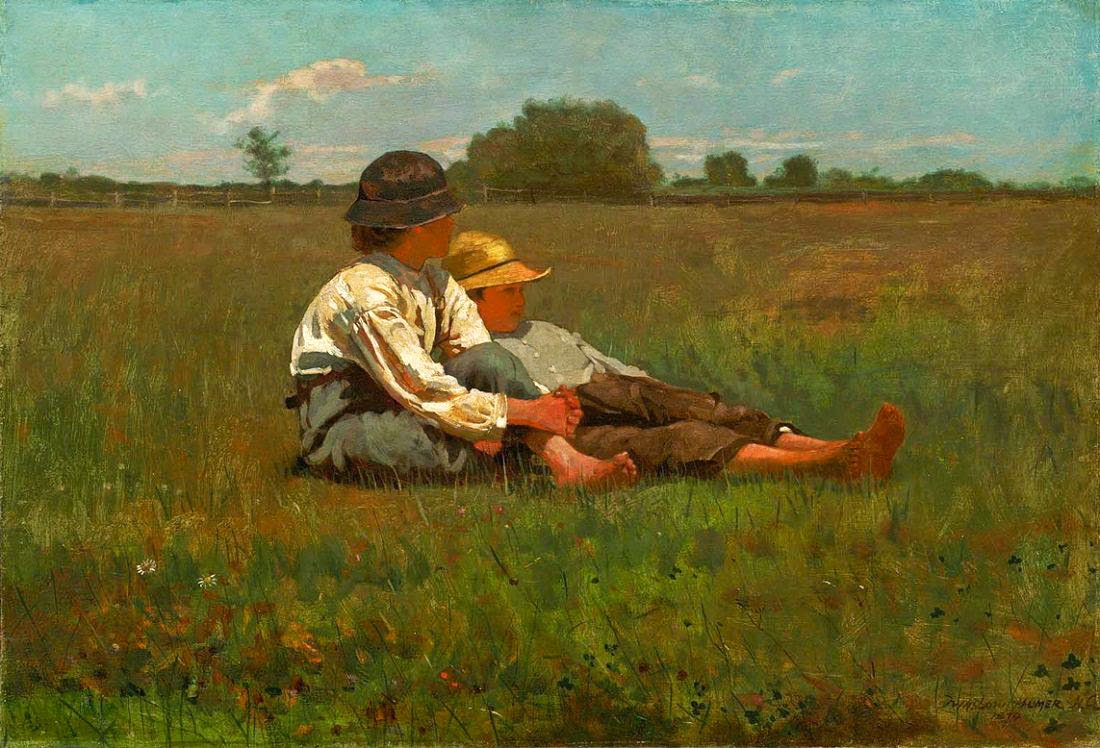 In the later 1860s and early 1870s Homer painted many, many pictures of children, especially boys in the country. Sick of war, I suppose, and longing for a return to the innocence of the antebellum years. This is Boys in a Pasture, 1874. 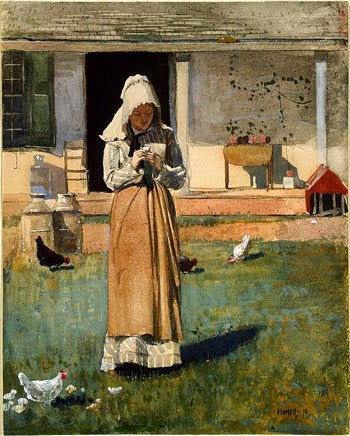 Another interesting facet of his work is a number of paintings of working women looking competent. Sick Chicken, 1874. 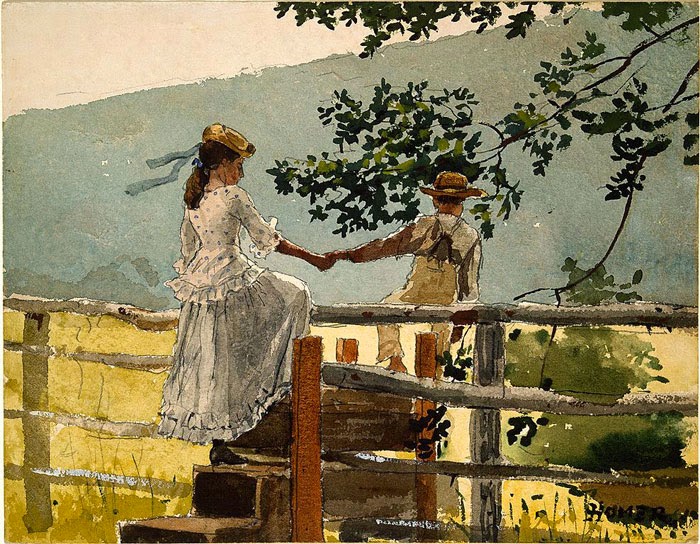 Sick Chicken is a watercolor, as is this lovely work, Over the Stile (1878). After spending 20 years mastering oil painting, in the 1870s Homer got bored with that, or something, and decided to take up watercolors, which people told him was crazy. But most of the famous works from the later decades of his life are watercolors, so I guess it worked out for him. 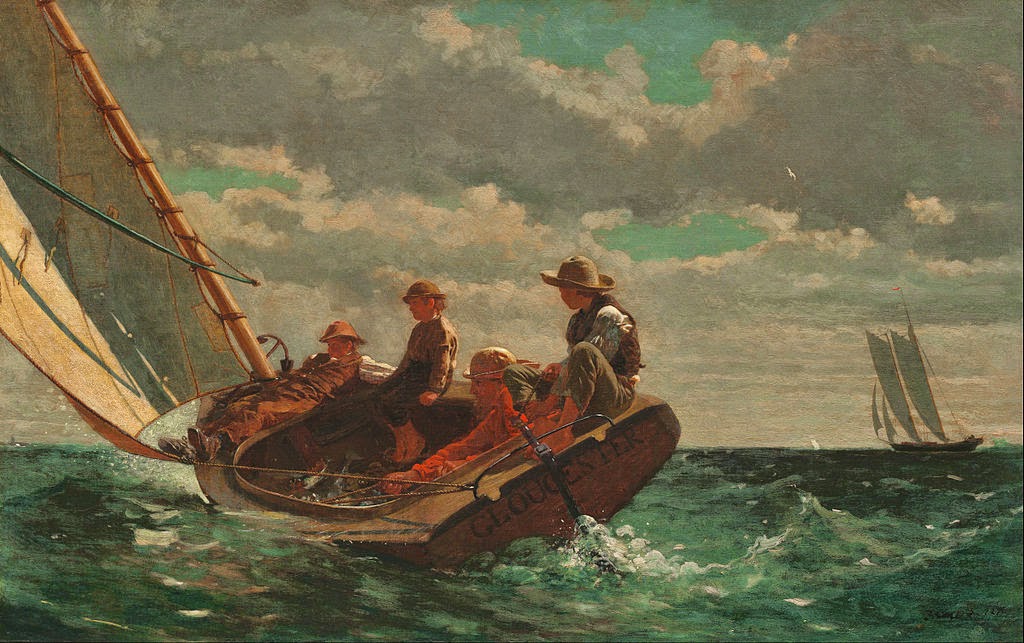 Homer quit illustration in 1875 to paint full time and had a huge success at the 1876 Centennial Exhibition in Philadelphia. Here he showed several works including what is probably his most famous, Breezing Up (A Fair Wind). People who loved the sea loved the painting and praised it extravagantly; those who disliked the sea were ambivalent. Among the latter was Henry James, who wrote,


We frankly confess that we detest his subjects...he has chosen the least pictorial range of scenery and civilization; he has resolutely treated them as if they were pictorial...and, to reward his audacity, he has incontestably succeeded. 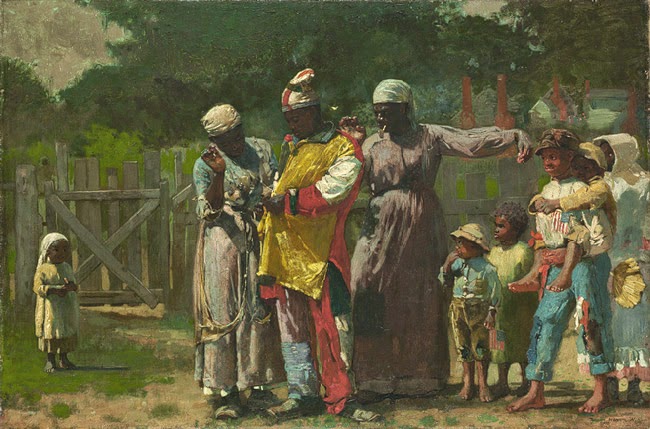 In 1877 Homer made a return trip to his old Civil War stomping grounds in Virginia and made several watercolors of African American life. This is Dressing for the Carnival. According to the Met:


The brilliant light and color of this scene, originally titled "Sketch–4th of July in Virginia," contradict its more solemn meaning. The central figure is being dressed as Harlequin, the clown and social outcast of European comic theater. The strips of cloth being sewn to his costume, however, derive from African ceremonial dress and from the festival of Jonkonnu, when slaves left their quarters to dance at their master's house. In the years following the Civil War, aspects of Jonkonnu became part of the celebration of the Fourth of July and Emancipation. Here, the pageantry of multihued costumes suggests a festive celebration, but it also reflects the dislocation of traditional African culture and the beginnings of its transformation into a new tradition. 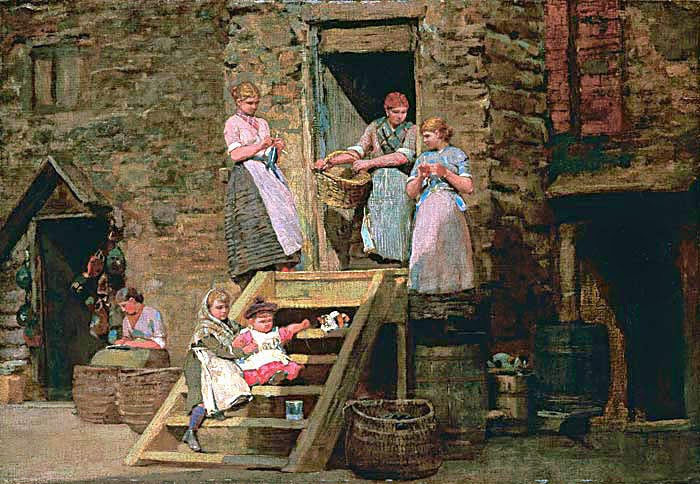 The success of 1876 allowed Homer to travel widely and take his work in new directions. In 1881 to 1882 he spent more than a year in England, mainly in the North Sea fishing village of Cullercoats. He painted mainly in watercolors; this, Sparrow Hall, is one of his few oils from that time. He was fascinated by the fisher women of Cullercoats and painted them many times. 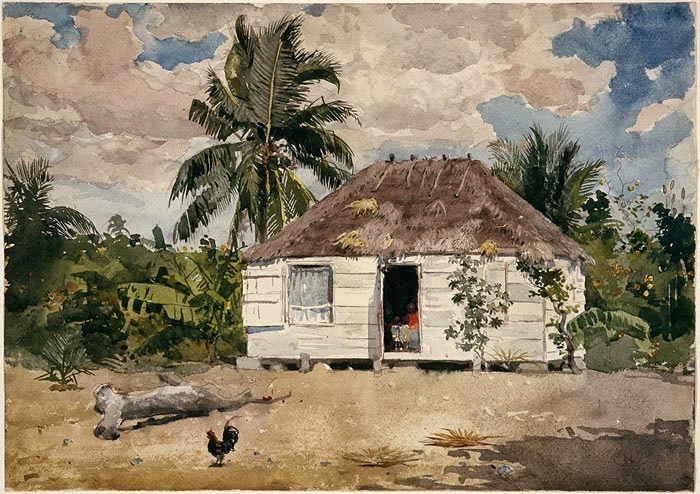 In the 1880s and 1890s he traveled widely in Florida and the Caribbean, creating many of the works for which he is best remembered. This includes the one at the top of the post, Flower Garden and Bungalow, Bermuda, 1899, and the one above, Native Hut, Nassau, 1885. 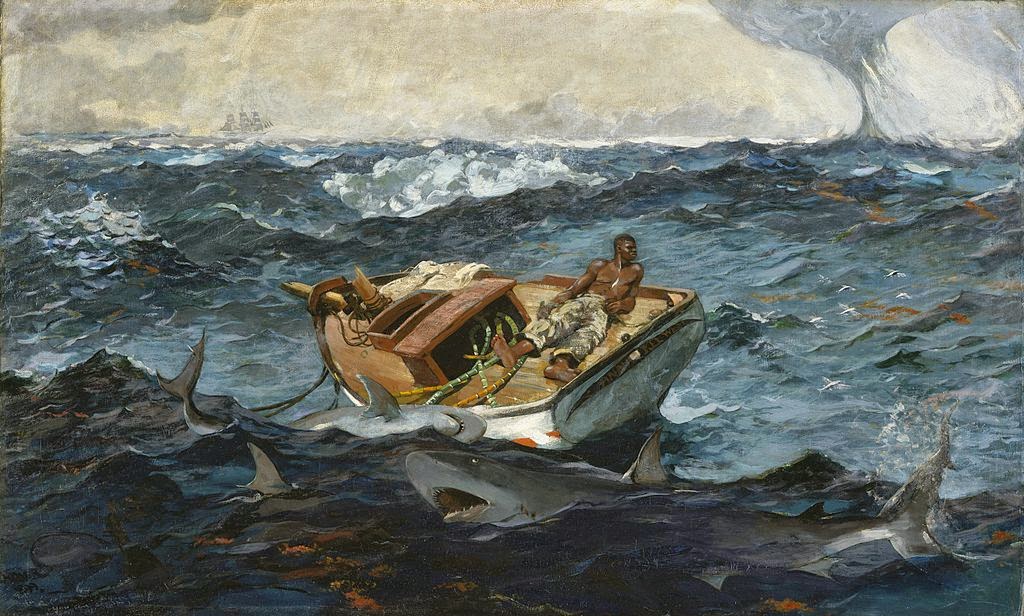