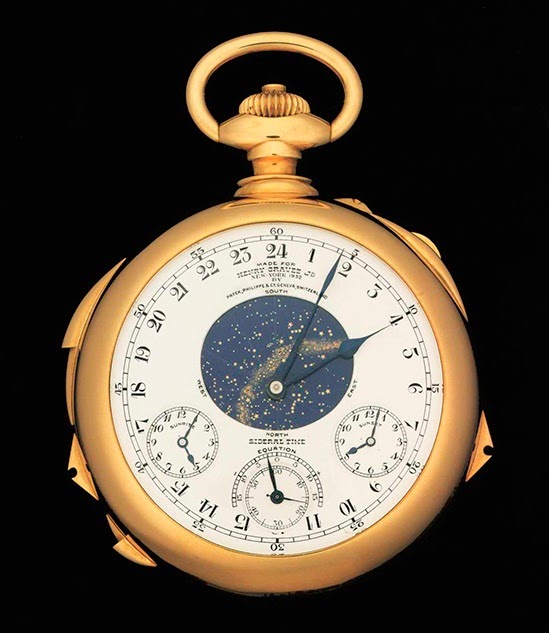 This is the "Supercomplication," made by Swiss watchmakers Patek Philippe and the most complicated watch ever made before the advent of computer design. It was the product of a rich-man's rivalry between two American friends, New York banker Henry Graves and automobile manufacturer James Packard. In 1927 Packard had commissioned a watch with 20 "complications" -- motions other than the hour and minute hands -- so then Graves outdid him by spend five times as much on a watch with 24 complications. It was completed in 1933. It is up for auction at Christie's, and they say of it:


The product of three years of research and five years’ effort by the most skilled technicians, this extraordinary timepiece is a gold openface minute repeating chronograph clockwatch with Westminster chimes. Among the features it incorporates are perpetual calendar, moon phases, sidereal time, power reserve, and indications for time of sunset and sunrise and the night sky of New York City. With a total of 24 horological complications, The Graves watch retained the title of the world’s most complicated watch for 56 years and even then was only surpassed by technicians working with the aid of computer-assisted machines.