Germany 1-0 Argentina, or, the Masochism of the World Cup 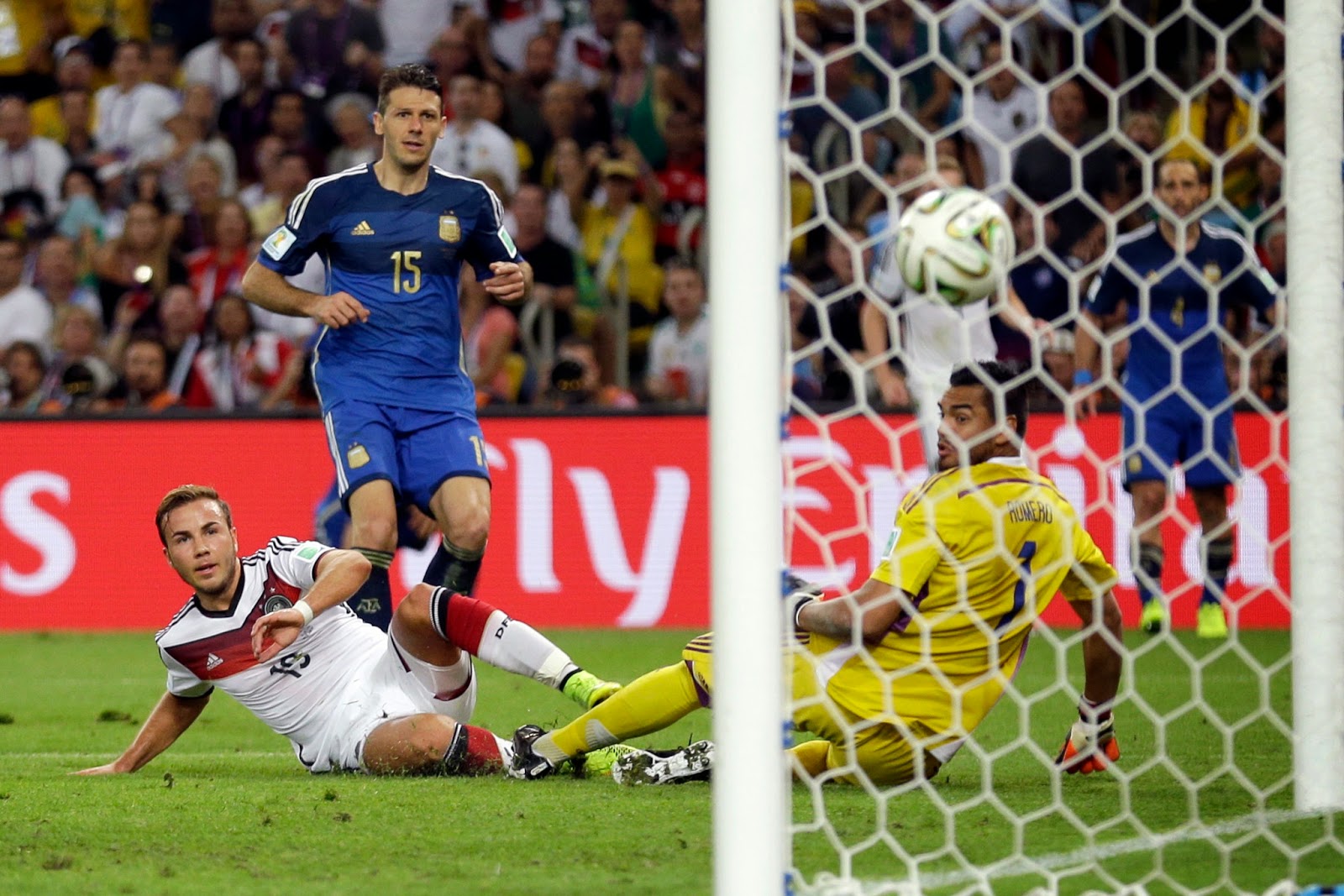 I watched the World Cup final yesterday and ended up with a headache -- 113 minutes of scoreless tension will do that to you. This is the dirty secret of soccer fandom, especially at the World Cup level: it usually isn't very fun. Instead you sit on the edge of your seat for minute after excruciating minute, biting your nails, and then comes the one awful deciding moment that as often as not means your team loses. More often than not for me, since I usually root for underdogs that haven't won the title before, and in the World Cup it is almost always one of the perennial powers that wins. 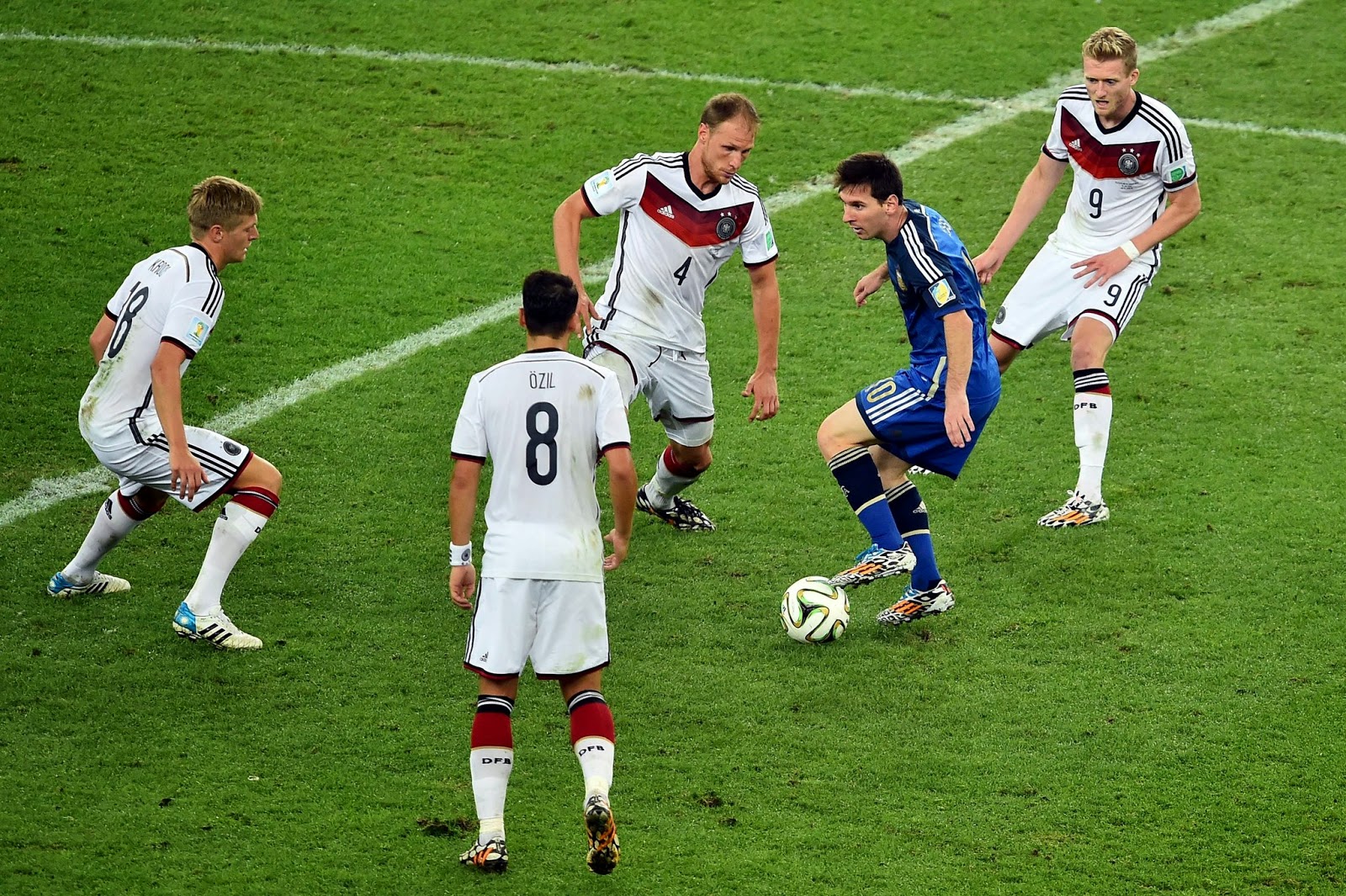 In this case I was rooting for Germany, so at the end the moment of brilliance that decided the game fell my way. Didn't cure my headache, though. Instead I felt melancholic about the career of Argentine star Lionel Messi. Messi is a brilliant player but he showed only flashes of his skill in this World Cup, and from what I read fans in Argentina are bitterly disappointed in him. But if you ask me his so-so play wasn't his fault, but the fault of his team. Argentina made it to the final after a long string of games they won 1-0 or even after penalty shootouts. Their defenders are good, but not that good; nobody could score on them because they packed their defense with eight, nine or even ten men, leaving no space for their opponents but also nobody to play offense. Instead they counted on rapid counter-attacking breaks, and on Messi, who won two games for them with his footwork at the edge of the box and extraordinarily quick shot. The Germans swarmed Messi with multiple defenders (see above), and he only got one quick look at the goal, missing what would have been an unbelievable shot if it had gone in. That should have left plenty of space for other Argentine attackers, had their been any, but usually there weren't and when there were they botched it, allowing the Germans to survive two embarrassing mistakes. Every time the camera zoomed in on Messi he looked weary and dejected, as if he couldn't stop thinking that his country had loaded all its hopes on his shoulders and then denied him the help he needed. 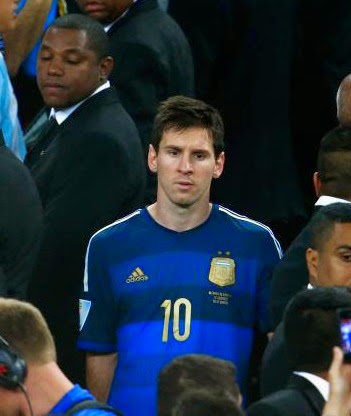 Germany attacked doggedly for the whole game and made several chances for themselves, but except for one missed header (hit the post, one of those maddening soccer moments that promises a relief from tension for about a second before dashing your hopes again) their chances were not great and any goal would have been an amazing one. When they finally did score it was an amazing goal, as you knew it had to be to break Argentina's wall. At this level of soccer, scoring goals is just very, very hard; unless the defense breaks down, everything has to be perfect, and even the best teams can only do it once or twice a game. As the Scottish commentator said, "All it takes is one brilliant finish." Gee, that's all.

I think maybe I'll skip the next Cup. Watching mediocre teams in the North American or English league is just a lot more fun.
Posted by John at 7:47 AM