Dungeons and Dragons and Writing 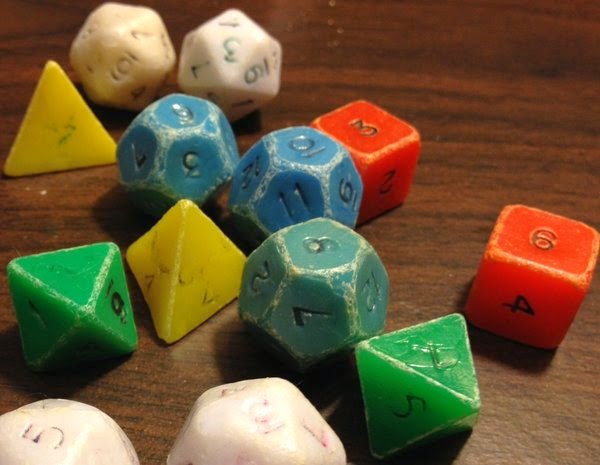 Ethan Dilsdorf has an article in the Times on the many writers who consider Dungeons and Dragons a key part of their background:

What would be like to play in George Martin's game? "After battling your way through the Caves of Hell and returning to the surface your exhausted party is attacked by a swarm of giant black dragons. . . ."

Love that photo of the old TSR dice.
Posted by John at 7:49 PM

My daughter has semi-precious gemstone dice though; they don't wear down like the old plastic did :)

We didn't even have funny dice for the first several years we played D&D! My family was over-seas, and we used numbered SPI-war game pieces taken randomly from a bowl. The game Traveler, which only used six-sided dice, was a great relief.
But on to serious matters: far more interesting, I think, than the SF/Fantasy authors who were inspired by D&D, is a whole generation of Medievalists, and the potential intellectual consequences for them of games of that type (but we are unlikely to know, because college professors, unlike fantasy novelists, rarely admit to such pursuits in their past or in their present). Also interesting would be the consequences for the demographics of the field. Did D&D (vel. sim.) markedly increase the number of undergraduates interested in Medieval History, and did that encourage universities to hire more medievalists? JEL