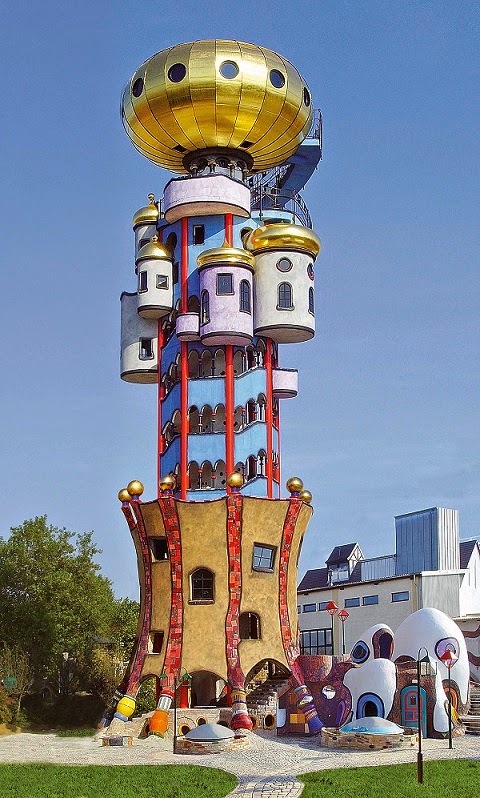 Friedensreich Hundertwasser (1928-2000) was an Austrian-born artist, architect, environmental activist, and loon. Born Friedrich Stowasser, he changed his name to Friedensreich Regentag Dunkelbunt Hundertwasser ("Peaceful-Kingdom Rainy-Day Darkly-Multicolored Hundred-Water.") He came to regard modernist architecture as the physical expression of totalitarianism and spent his adult life raging against it. He built a handful of strange buildings across Europe that can best be compared to those of Antoni Gaudí, then bought land in New Zealand and set about trying to build an off-the-grid eco-paradise there. 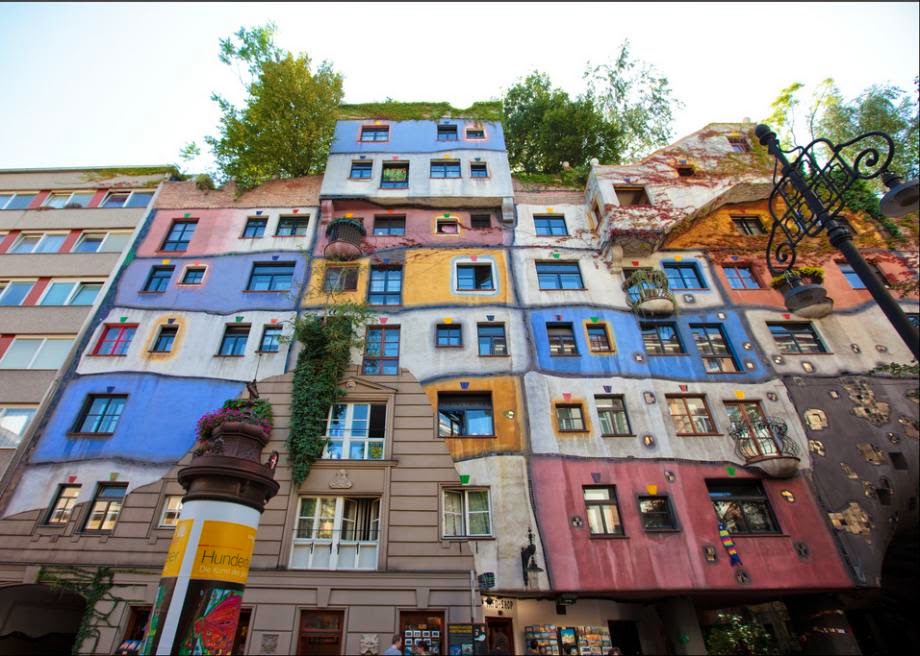 Hundertwasser hated straight lines -- he once called them "the devil's tools" -- and his love of curves was so great that he once designed an apartment building with undulating floors. His career, I think shows the value of unconventionality bordering on insanity; who else would have fought so hard against the totalitarian machinery of modernism? What sane careerist family man would have given us such an original vision? In 1958 Hundertwasser issued a manifesto in which he laid out his views of architecture and society; the rest of the text in this post comes from that manifesto. 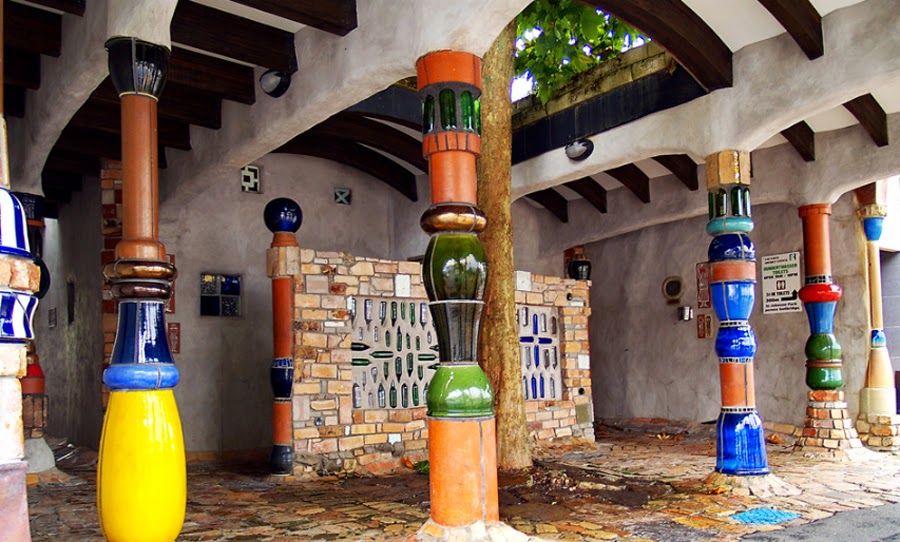 Painting and sculpture are now free, inasmuch as anyone may produce any sort of creation and subsequently display it. In architecture, however, this fundamental freedom, which must be regarded as a precondition for any art, does not exist. 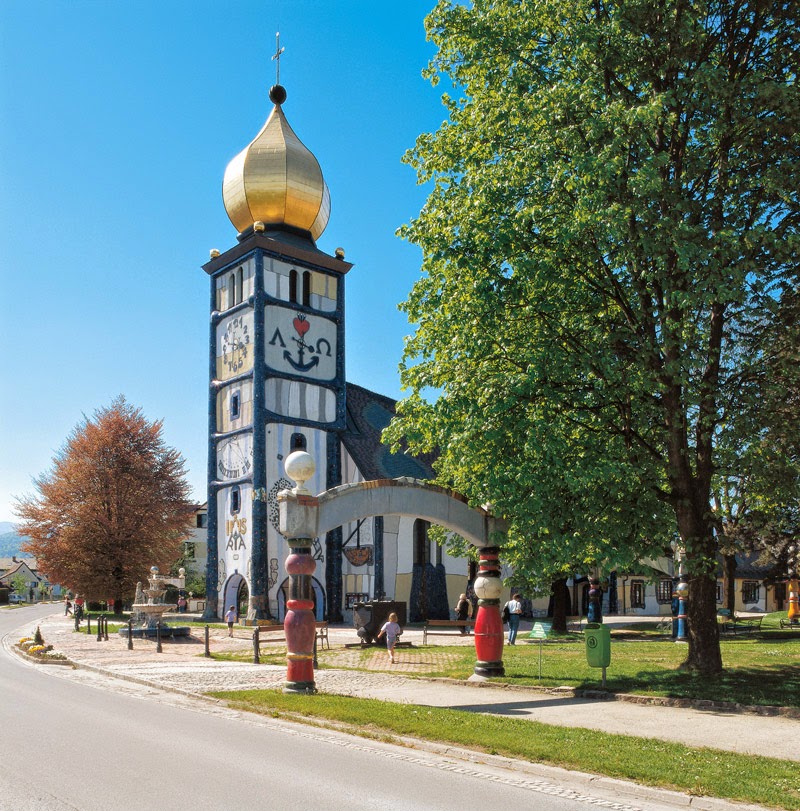 Functional architecture has proved to be the wrong road to take, similar to painting with a straight-edged ruler. With giant steps we are approaching impractical, unusable and ultimately uninhabitable architecture. 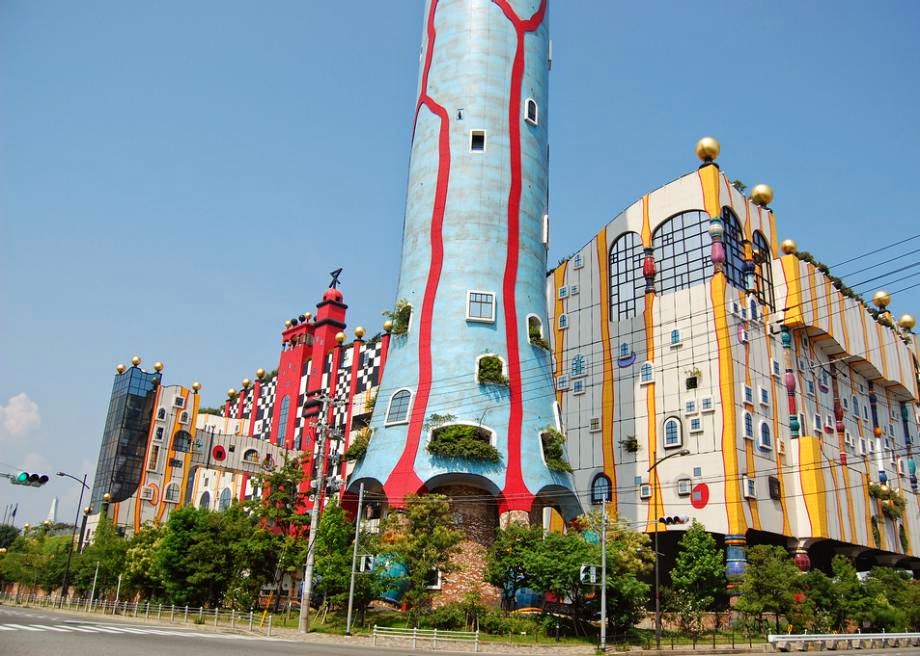 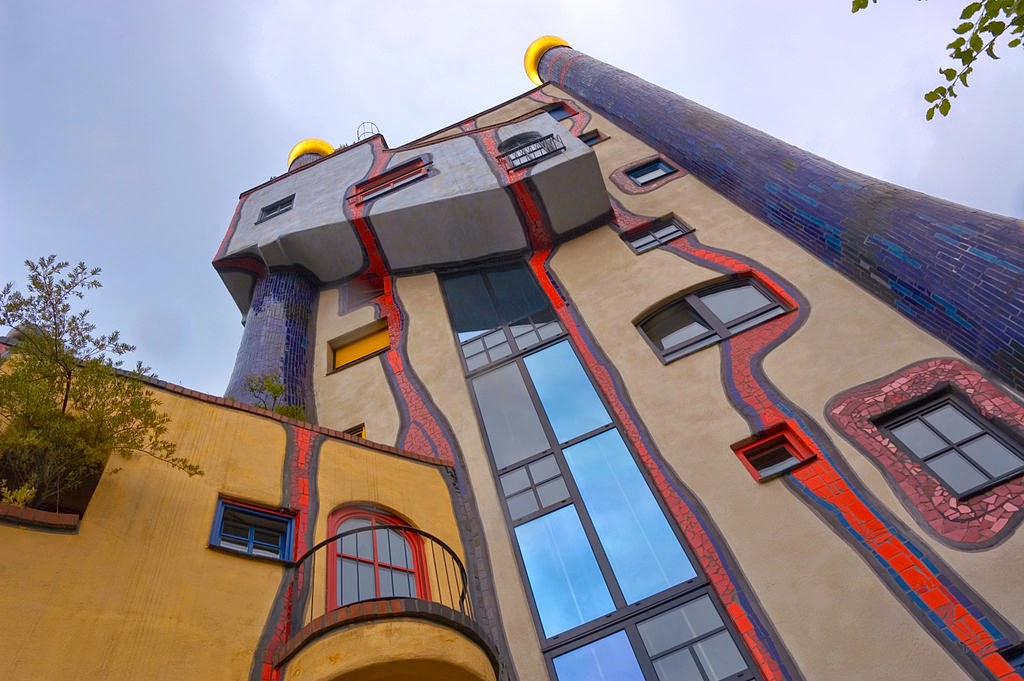 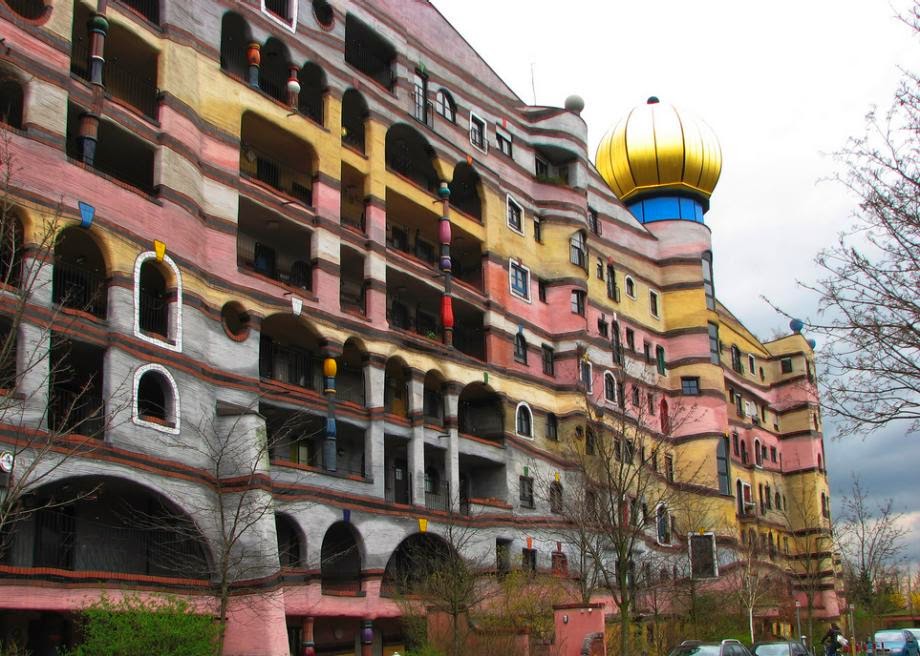 The irresponsible vandalism of the constructive, functional architects is well known. They simply wanted to tear down the beautiful stucco-facade houses of the 1890s and Art Nouveau and put up their own empty structures. Take Le Corbusier, who wanted to level Paris completely in order to erect his straight-line, monstrous constructions. Now, in the name of justice, the constructions of Mies van der Rohe, Neutra, the Bauhaus, Gropius, Johnson, Le Corbusier, Loos etc. should be torn down, as they have been outdated for a generation and have become morally unbearable. 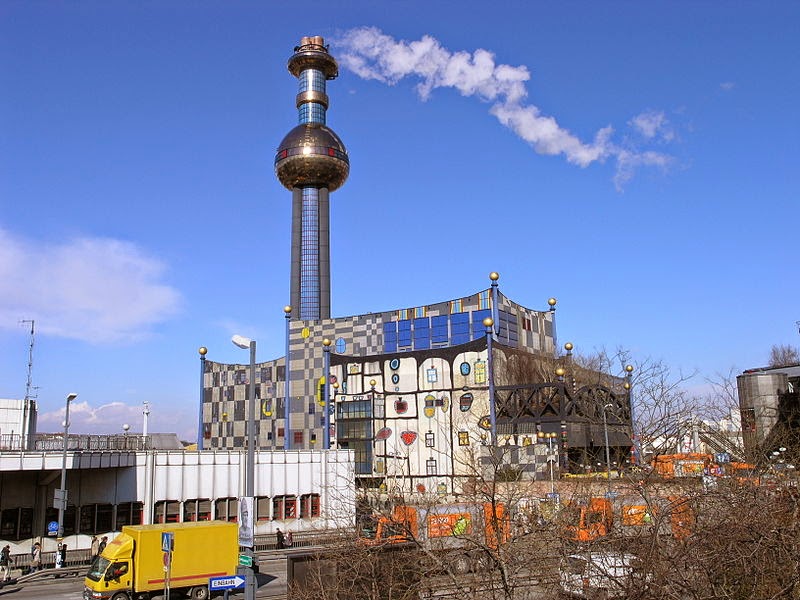 Today's architecture is criminally sterile. For unfortunately, all building activity ceases at the very moment when man "takes up quarters", but normally building activity should not begin until man moves in. We are outrageously robbed of our humanity by defiling dictates and criminally forced not to make any changes or additions to facades, the layout or interiors, either in colour, structure, or masonry. 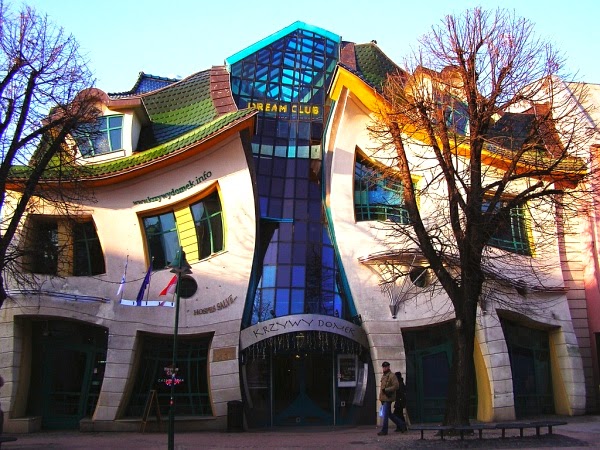 This jungle of straight lines, which is entangling us more and more like inmates in a prison, must be cleared. Until now, man has always cleared away the jungles he was in and freed himself. But to clear a jungle you must first become aware that you are in one, for this jungle took form stealthily, unnoticed by mankind. And this time it is a jungle of straight lines. 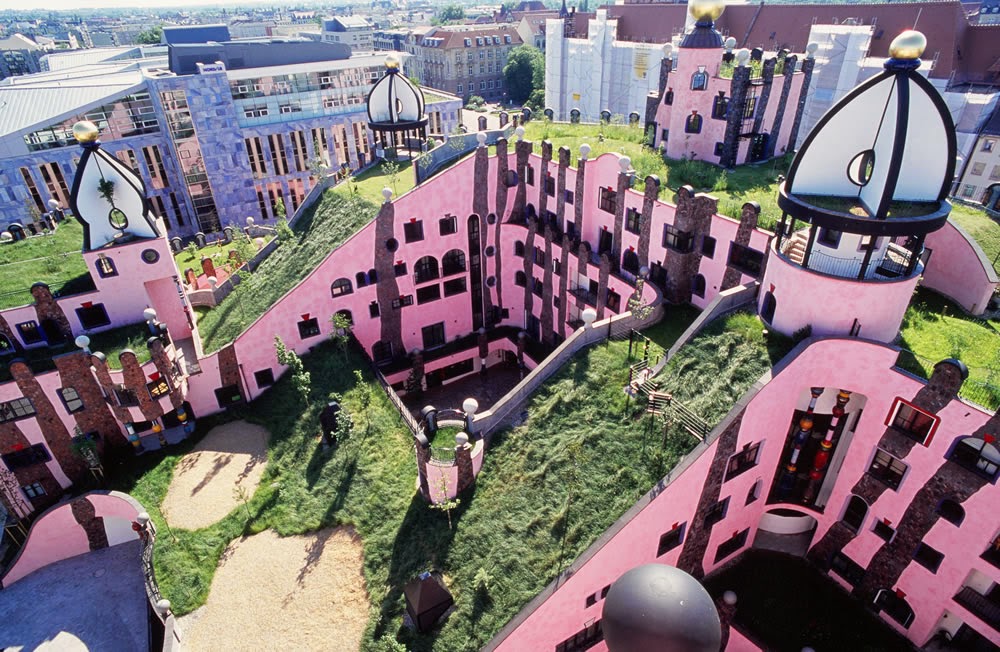 Any modern architecture in which the straight line or the geometric circle have been employed for only a second – and were it only in spirit – must be rejected. Not to mention the design, drawing-board and model-building work which has become not only pathologically sterile, but absurd. The straight line is godless and immoral. The straight line is not a creative line, it is a duplicating line, an imitating line. In it, God and the human spirit are less at home than the comfort-craving, brainless intoxicated and unformed masses. 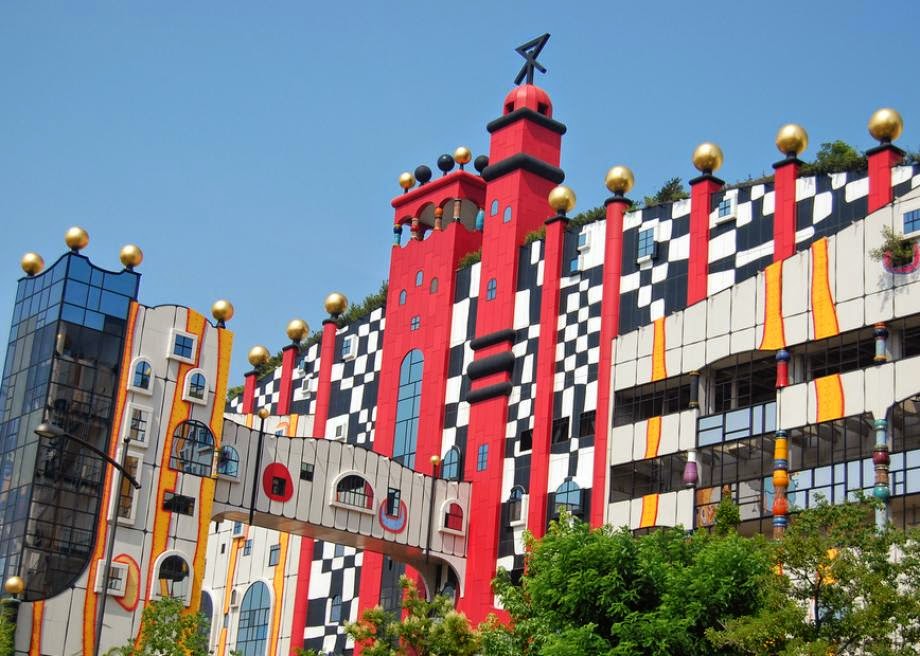