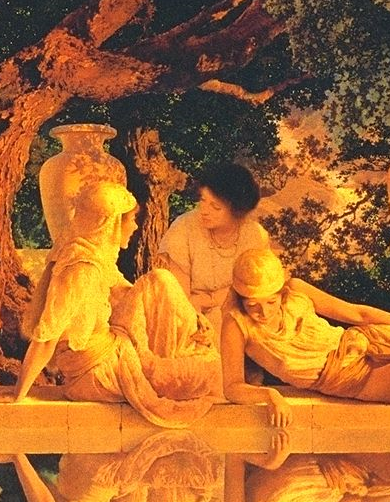 Maxfield Parrish (1870-1966) was an American artist and illustrator best known for the idiosynchratic color and light he used to suggest visions of another world. This makes it difficult to find digital files that come anywhere close to his originals, even though most of them were done to be printed in books or magazines. Do a quick search for Parrish - Daybreak and you'll see what I mean. 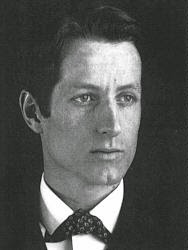 Parrish was born in Philadelphia, the son of an artist father. His given name was Frederick, but this struck the young man as insufficiently artistic so he adopted his grandmother's maiden name of Maxfield as his professional moniker. He attended three different Philadelphia area art schools, not graduating from any, and then began working as a commercial illustrator. Portrait of the artist as a young man. 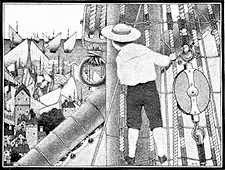 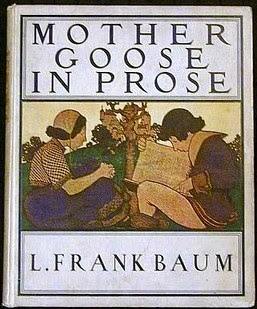 His first two major commissions were Kenneth Grahame's The Walls were as of Jasper and L. Frank Baum's Mother Goose in Prose,  both in 1897. 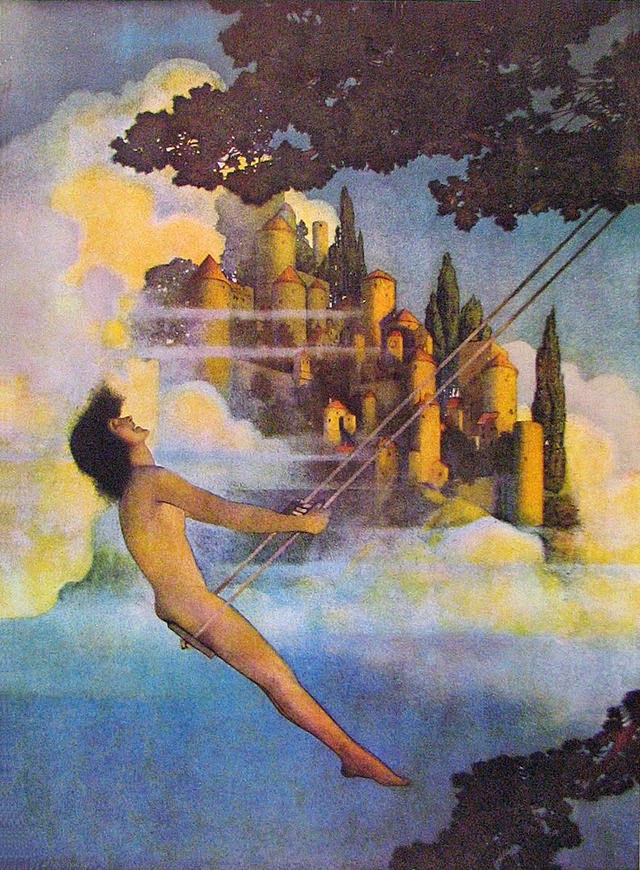 In the early 1900s Parrish took on many of the classics that were produced in so many wonderful editions in that period, such as Eugene Field's Poems of Childhood (1904). This is for "Dinky Bird," and it reveals Parrish's fascination with the androgynous figure. By this time Parrish had developed the painting method that he used for much of his career:


Parrish's idiosyncratic painting method involved applying numerous layers of thin, transparent oil, alternating with varnish over stretched paper, yielding a combination of great luminosity and extraordinary detail. In his hands, this method gives the effect of a glimpse through a window....except that the scene viewed is from the fairy tale world. 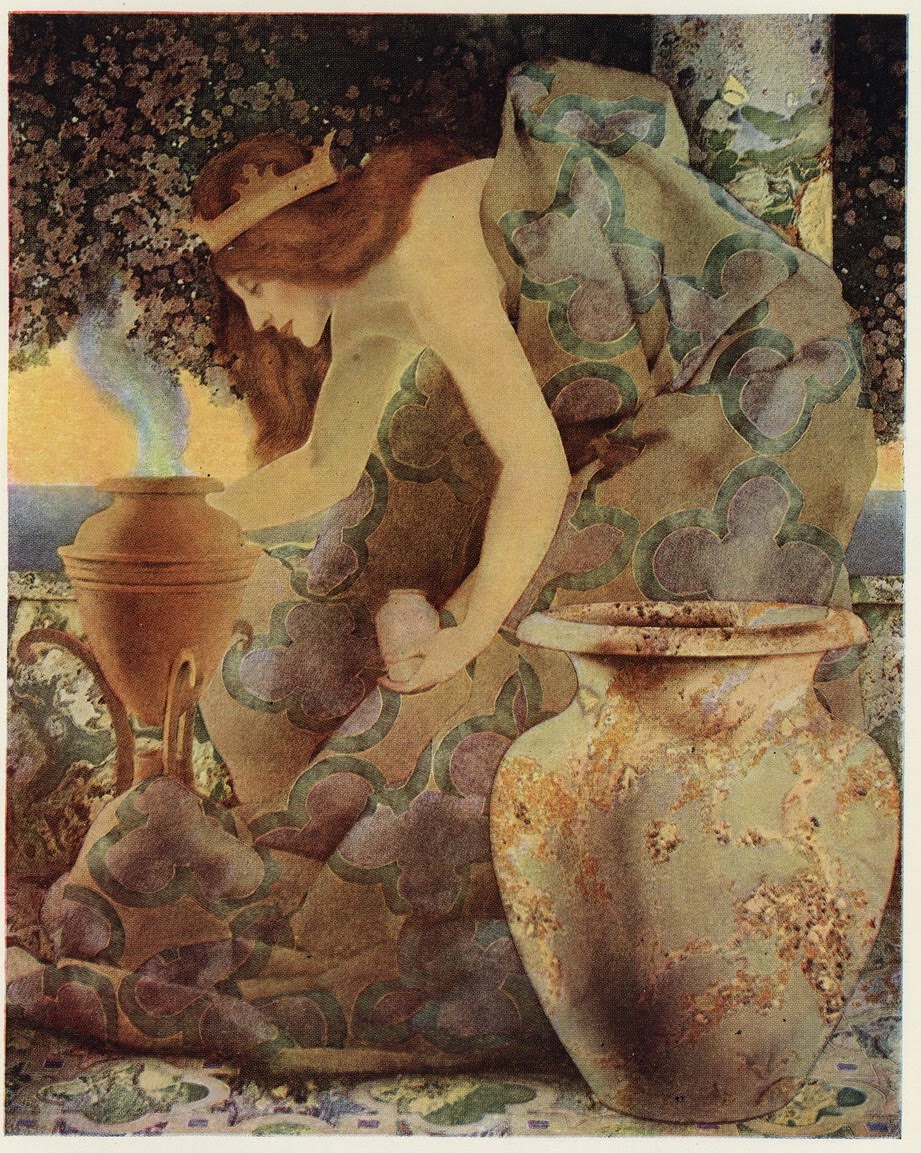 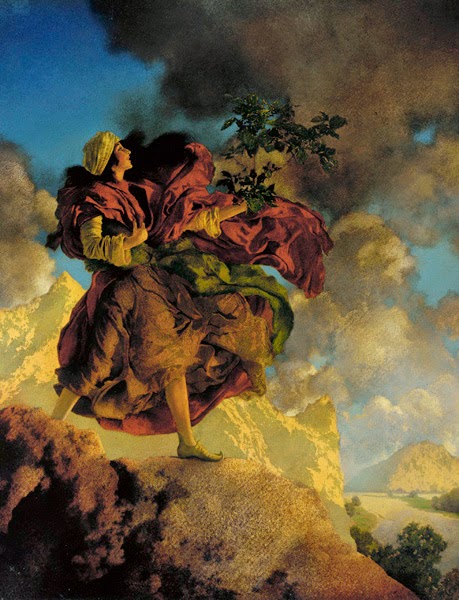 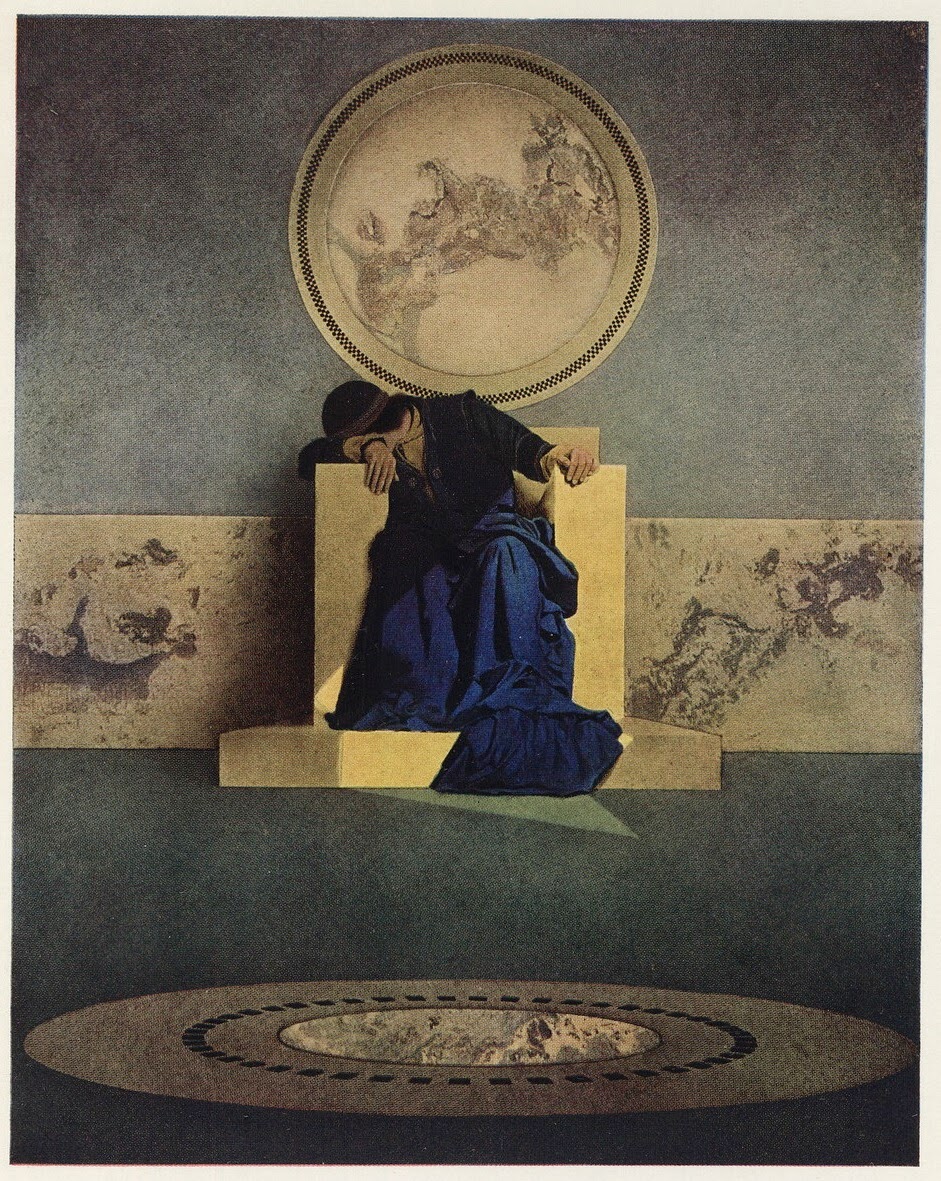 Images from Parrish's Arabian Nights, 1909. This must have been printed on highly acidic paper, because almost all the images I can find are dark and have lost most of their color. Directly above, from "The Young King," is an especially famous image reproduced all over the place, and from most of the jpeg's you would never know his gown was blue. 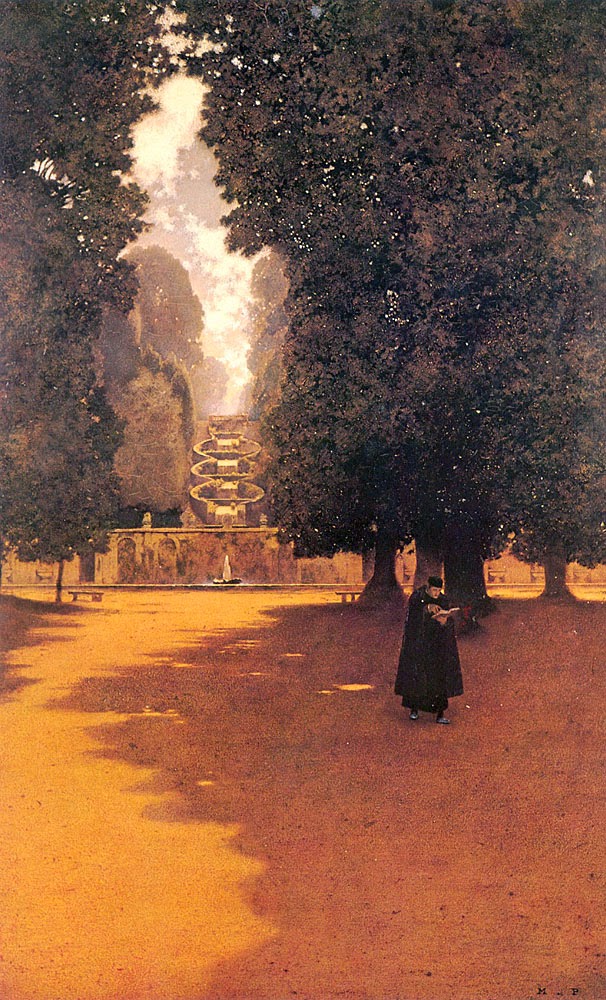 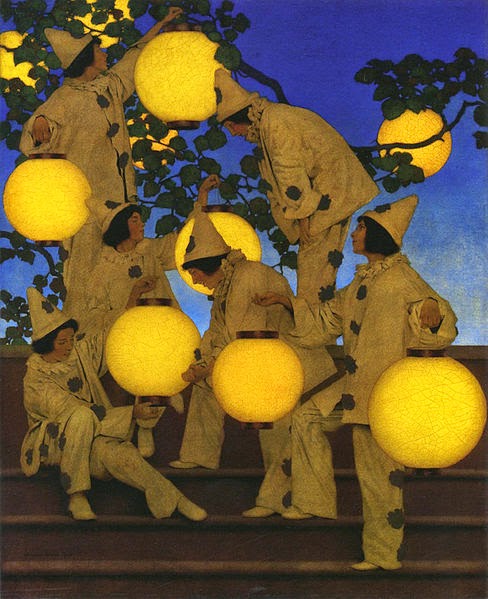 The Lantern Bearers, 1908. This now hangs in the museum that Walmart heiress Alice Walton built in Bentonville, Arkansas, a place that is boycotted by various left-wing art fans apparently on the puzzling theory that the Waltons are more evil than the Mellons, Carnegies and other great art patrons of the robber baron era. At least the Waltons have never raised a private army and opened fire on their employees. 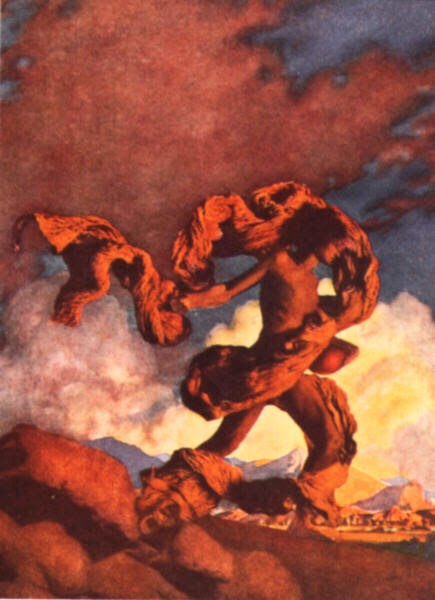 Cadmus Sowing the Dragon's Teeth, 1908. Parrish was into geometry and spent a lot of time tracing out his compositions using the golden ratio and other simple geometric relations. You can see several triangles and rectangles in this. 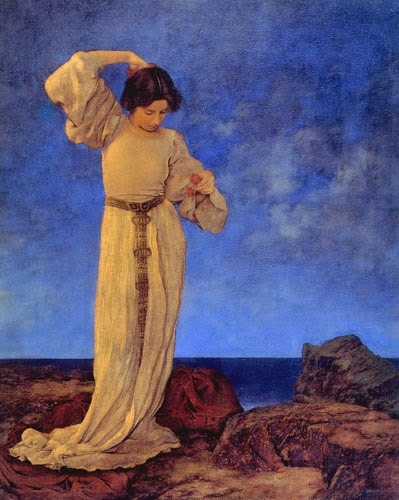 Griselda, 1910. Parrish loved that background color so much that people sometimes referred to it as "Parrish Blue."

When he became successful -- in 1910 he earned more than $100,000 -- Parrish bought land in New Hampshire and built himself an estate there called The Oaks where he carried on with a rather strange personal life. Wikipedia has this:


For 58 years he was married to Lydia, a pretty art instructor who later became one of the first documentors of African-American slave songs of the Deep South. Yet, he also had a beautiful model/mistress and one of the most romantic relationships of the century. For over 55 years, the lovely Susan Lewin was his constant companion. In 1960, a few years after the death of Lydia, when he did not marry Susan, she retaliated by marrying a childhood friend. Although 90 years old, Parrish was still painting actively, but upon learning of Susan’s marriage, he never painted again. 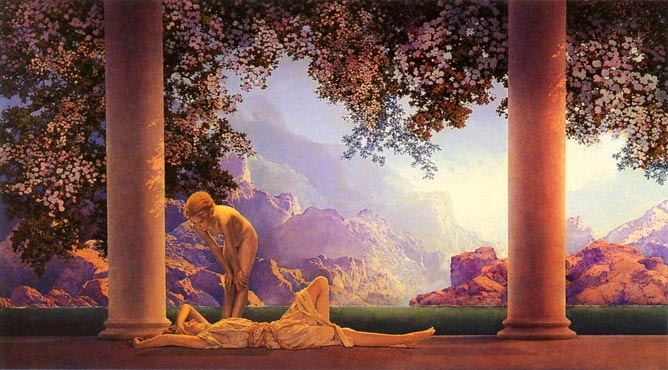 Daybreak, 1922, Parrish's most famous work, perhaps because it so clearly expresses the vision of another world glimpsed in astral light. This was done on commission to be reproduced as a large print and hung in hotel lobbies. 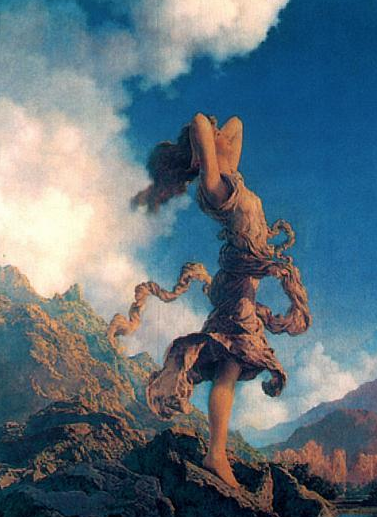 Ecstacy, 1926. Parrish did a lot of "women on rocks" in the 1920s and 1930s, many of them as advertisements for companies like General Electric. 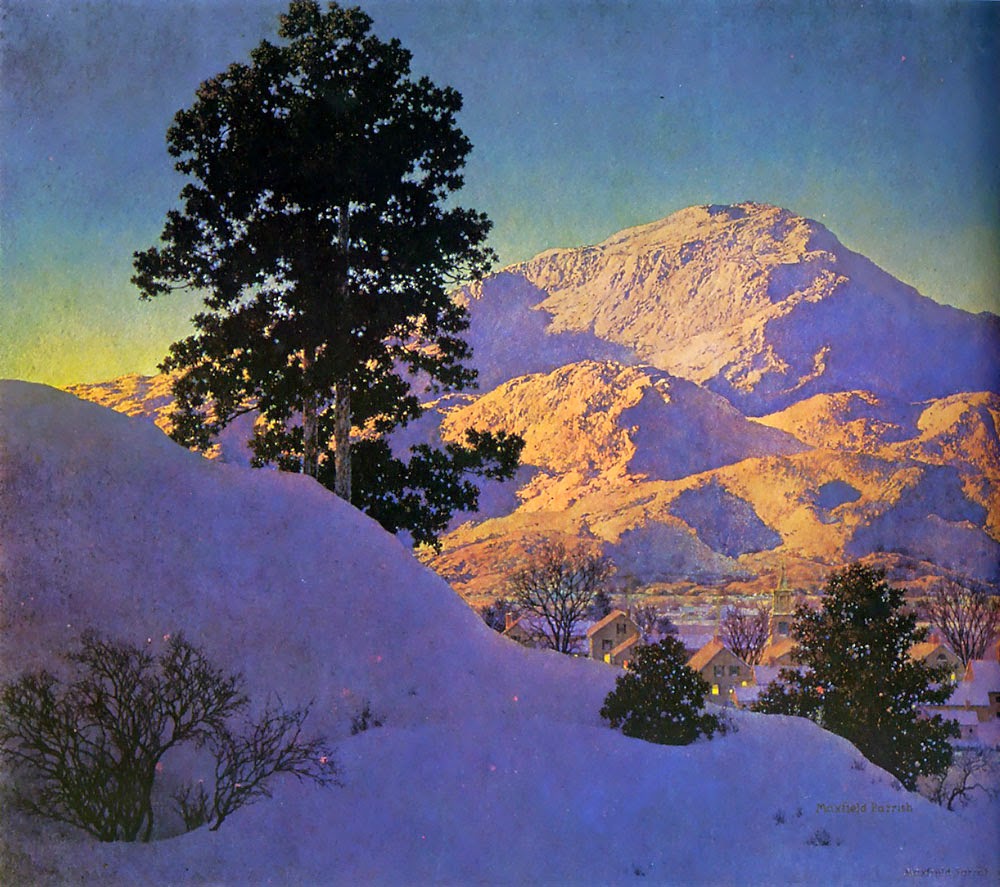 Parrish remained a classicist throughout his life and also determinedly lowbrow. He thought it odd that by the 1950s his admirers were mainly highbrow, and he several times described himself as a "commonplace" or "popular" artist. In 1936 he remarked,


Modernistic-Abstractionist-Art... consists of 75% explanation and 25% God knows what!