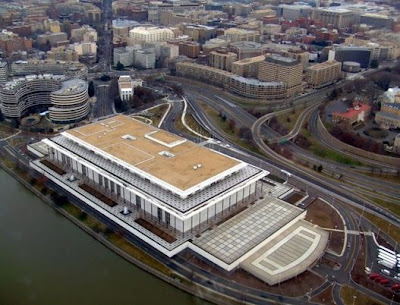 The Kennedy Center in Washington is a nice place to see a concert, if you can get there and find your way in. As you can see in the aerial view above, the huge box of the hall is surrounded by highways and pretty much impossible to walk to, even though it is just four lanes away from very popular paths along the river. It is a completely isolated island. 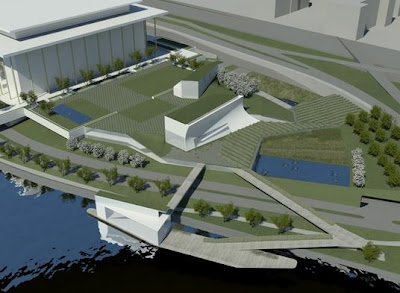 Yesterday a new plan was announced to reduce the isolation and make better use of some of the surrounding space. The plan, by architect Steven Holl, involves three new pavilions, one of them floating on the river, and a garden. The river pavilion could be used for concerts, and one of the other pavilions would include a large screen for simulcasting events inside the center. Considering how awful this space is now, this looks like a major improvement, and we should all cheer whenever parking lots and driveways can be replaced by gardens.
Posted by John at 7:44 AM