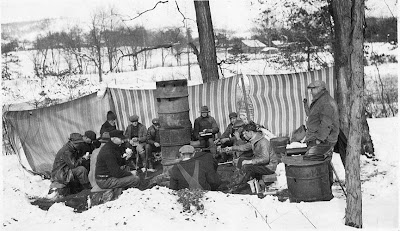 From 1934 to 1941, the Works Progress Administration sponsored a long series of archaeological projects in western Pennsylvania. This area had been devastated by the Depression, and WPA had money to put some of the region's army of unemployed men back to work. Their mandate, though, was to avoid projects that would compete directly with private businesses. So when engineer Edgar Augustine came forward with his proposal to put men to work digging on ancient Indian villages, the local WPA bosses approved. The state of Pennsylvania has now put up a series of web pages documenting this work,with dozens of photographs from the excavations. 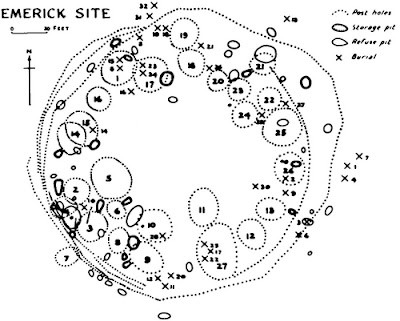 Most of the sites turned out to be villages of the late prehistoric period, what we call the Monongahela culture of 1200 to 1600 CE. The work was largely forgotten by archaeologists until Bernard Means started working back through the old records. He discovered that field notes and such were much better than many people had supposed, especially for the sites later in the series, and that the collections included surprising things like charcoal that could be dated using radiocarbon methods. With the help of a NSF grant, he has run many dates and has been publishing these results. 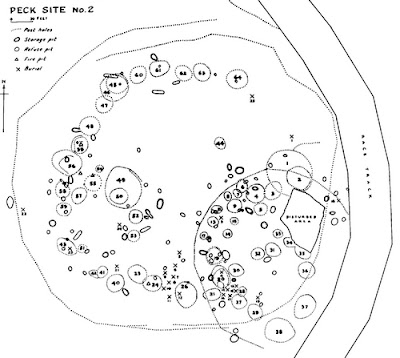 On sites of this type, brute force archaeology actually produced a lot of useful data. The site maps are an especially valuable resource; using modern methods and professional excavators, it is rarely possible to expose more than a small part of a village site. Thus the overall pattern remains obscure. But with his force of working men, Augustine was able to completely remove the plowzone from a dozen villages and map all the house patterns and pit features. In the example above, you can see that there were two overlapping villages at the Peck No. 2 Site. The smaller one dates to about 1150 CE and is the earliest in the WPA group. The larger dates to around 1540 and is one of the later. 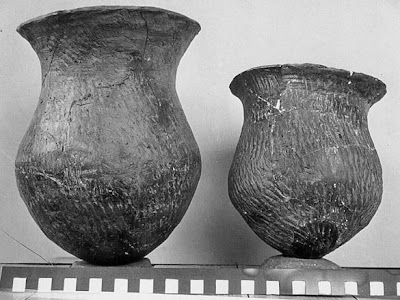 The excavations also produced a large artifact sample. In the case of these villages, there is often sufficient contextual information to make the artifacts highly informative. Most of the villages were occupied for only a decade or two, so all the material derives from a single cultural episode. Above, pots from the Montague Site.

More pots from Montague, some of them resting on the objects archaeologists called "discoidals" and that we now think are for the field hockey-like game of chunkey or something similar. 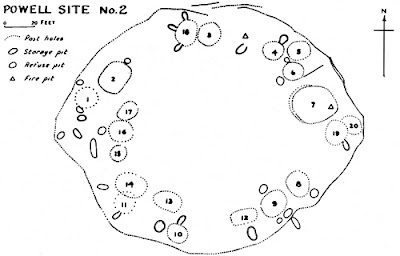 I love it that this information is now being made available. Huge amounts of data from old archaeological projects is moldering in museums around the world, and nobody but graduate students or retirees has the time to go through the old boxes and see what they hold. Putting more of this information online where anyone can see it should be a major priority of anyone with such a collection.
Posted by John at 7:17 AM