Sophie Schmidt, daughter of Google co-founder Eric Schmidt, accompanied her father on a trip to North Korea and wrote a hilarious account of the journey. A small sample:


The Kim Il Sung University or as I like to call it, the e-Potemkin Village: 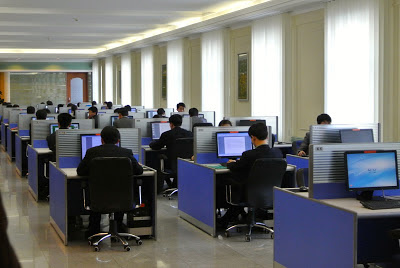 Looks great, right? All this activity, all those monitors. Probably 90 desks in the room, all manned, with an identical scene one floor up.

One problem: No one was actually doing anything. A few scrolled or clicked, but the rest just stared. More disturbing: when our group walked in--a noisy bunch, with media in tow--not one of them looked up from their desks. Not a head turn, no eye contact, no reaction to stimuli. They might as well have been figurines.

Of all the stops we made, the e-Potemkin Village was among the more unsettling. We knew nothing about what we were seeing, even as it was in front of us. Were they really students? Did our handlers honestly think we bought it? Did they even care? Photo op and tour completed, maybe they dismantled the whole set and went home.

When one of our group went to peek back into the room, a man abruptly closed the door ahead of him and told him to move along.

What an amazingly weird place that is. Oh, one other odd fact I just discovered about North Korea is that marijuana grows semi-wild all over the place, and people smoke a lot of it. They certainly need something to help them get by.
Posted by John at 9:51 PM