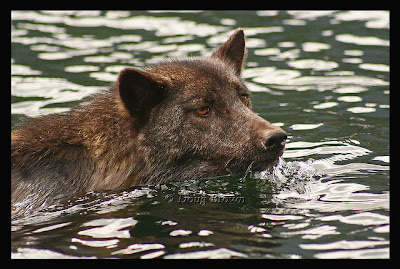 On the western coast of Canada, where the Great Bear rain forest meets the Pacific Ocean, live wolves who make their living as much from the sea as the land. These wolves are a distinct sub-species, smaller than inland wolves and with other differences in their fur and coloration. They swim often and well, crossing miles of ocean to reach islands where they forage. They eat clams, mussels, crabs, fish, sea birds, and even beached whales; when the salmon run they catch them by the hundreds and then eat their heads, leaving the rest of the fish behind. Sometimes they kill seals, when they can catch them away from the water. They also hunt deer and smaller terrestrial mammals like other wolves do, but some packs get as much as 75 percent of their food from the sea. 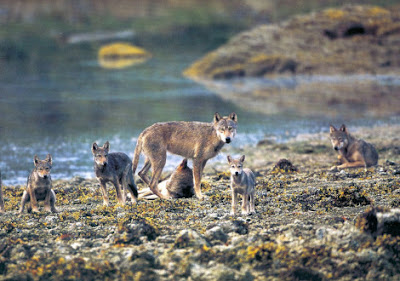 I discovered them looking for a book that my 10-year-old son could use for a book report in school. Pulling titles off the animals shelves of my library more by size than anything else, looking for something with the right amount of text, I happened to yank out The Sea Wolves by Ian McAllister and Nicholas Read. This book begins with an intensely annoying diatribe against the human hatred of wolves, complete with an analysis of The Three Little Pigs, followed by a lot of useless stuff about how nice wolves really are. As if every 10-year-old in America didn't already prefer wolves to  pigs. Our hatred of wolves did rise to irrational heights, but it was rooted in the fact that wolves love to eat sheep, which from their perspective are hefty servings of meat just as tasty as deer but bred to be stupid and slow. Now that we no longer have to worry about going hungry if a wolf takes our lambs, we like wolves again. But once you get pas the annoying introduction, The Sea Wolves is a cool book with lots of great pictures and much interesting information about these wolves and their environment. 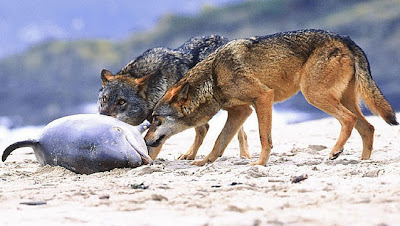 Parts of Canada's western coast remain profoundly wild, reachable only by boat or by many miles of hiking through roadless forest. This means the coastal wolves have little experience of people; some even call them "the last wild wolves." I find them fascinating, and discovering them made me feel lucky -- lucky to have stumbled across this book, and lucky to live in a world where so much information about the world is at my fingertips.
Posted by John at 11:42 AM