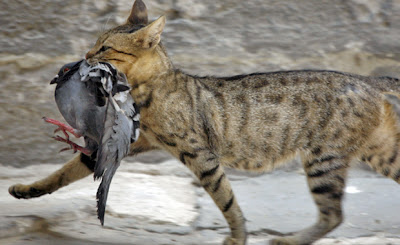 The latest salvo in the ongoing war between bird fanciers and cat owners is a new study, by some migratory bird experts at the Smithsonian, estimating that cats kill 1.4 to 3.7 billions birds in the US every year, and 6.9 to 20.7 billion mammals. Most of the killing is not done by house pets, but by stray or feral animals.

Scary numbers, if they are anywhere near correct.

But I have to wonder: what impact does this have? My neighborhood is full of birds. Leaffall every year reveals at least three new nests in just my yard. I find it hard to imagine that any more robins or mockingbirds could live on my block, even if all the predators disappeared overnight. Has anybody noticed a major decline in the songbirds of exurbia, or the pigeons of our cities? What is the natural songbird population for a wooded suburb, and does the concept have any meaning?

The real concern, I guess, would be if cats prey preferentially on rare birds that we are trying to preserve -- bluebirds, or red cockaded woodpeckers, or some such -- thereby encouraging starlings, song sparrows, and robins to spread even more. But I haven't seen any such claims. The researchers do say that cats prefer native chipmunks to invasive brown rats, which is hardly surprising given that a brown rat is about 20 percent of a cat's mass, and fierce.

Is there some impact on other predators? Are cats out-competing falcons or foxes or weasels?

Or is it just that bird fanciers hate cats and cat people, and since they can't live out their fantasies of poisoning all the cats in the country, they produce these studies instead?
Posted by John at 12:14 PM

Thank you for helping me feel better about that study!

For the record, I haven't had an outdoor cat since losing my first one to some larger animal (We heard the fatal fight.), but I love birds almost as much as kittehs. But when I did have an outdoor cat, he'd bring home his voles and moles to share with us before he ate them head first. Do we really need more field rodents sneaking into our homes and damaging them? Hail to the mousers who keep homes and barns free from rodents!

The Audubon society has certainly noticed a decline:

Ok, so some bird species are in decline, but we knew that. None of Audubon's top 20 common species in decline is declining because of predation. Meadowlarks and horned larks are threatened by intensive farming, bitterns by wetland loss. Many birds on the list are said to be threatened by global warming or changes in the "fire regime" of western forests. Cats do not appear, not once, in that whole section of their web site.

To be clear, I am not saying that cats do no damage to bird populations. Maybe they do. But these scary big numbers say nothing about that one way or the other.

Okay, yes, but then the study demonstrating that cats kill billions of birds every year just happened, right? And I believe that "invasive species" ARE actually mentioned as a threat, and cats are an invasive species. One of many, but clearly they're having some impact (numbering to the billions).

Here in New Zealand, where admittedly, we are pretty serious about conserving our native bird populations (probably because they are pretty much our only native species apart from lizards and a couple of species of bat) there has been a lot of debate about making cat ownership illegal. However, one important point was made in favor of cats, namely that cats, alongside bird predation, do predate rats, mice, stoats etc, all rodents whose egg stealing activities have a huge impact on bird numbers, particularly here in NZ where we have many flightless species. Far from being inefficient rat catchers, most strong outdoor moggies (as opposed to some delicate pedigree cats, I exclude most orientals here, my Siamese was an amazing ratter) are ferocious ratters. Without my cats help, the 20 or so rats I saw she had killed per year would have soon overwhelmed the environment, killing huge numbers of baby birds and eggs in the nest. Something to put into the equation when accessing the impact of cats on birdlife.