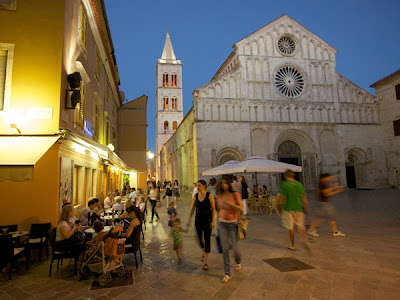 On this cold, cold day my thoughts take me to the Mediterranean, to pick over ancient ruins in the warm sun. Or to Zadar, Croatia, once a great trading city and now a haven for students, tourists, and yachtsmen. The people who rank such things regularly put it in their lists of top destinations, so why not? 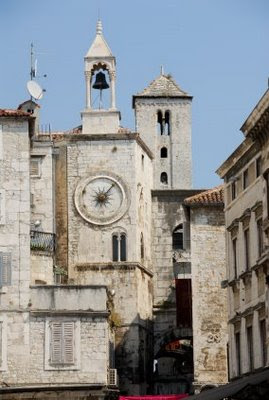 The town is full of cute squares and the kind of narrow, angled streets that create little surprises as you walk through its medieval buildings.

Zadar is one of those Mediterranean ports that passed back and forth between empires like a model changing clothes. In ancient times it was the capital of the Liburnians, who tried to stay neutral in the long war between Rome and Illyria so they could trade with both sides. They slid into being Roman allies, and when they took Julius Caesar's part in the civil war he made them honorary Romans. 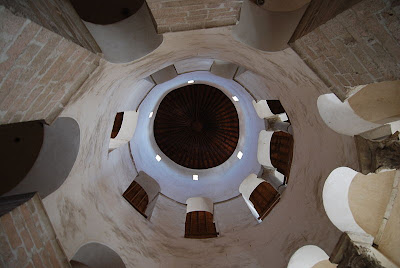 When Rome fell apart, Zadar became part of the Ostrogothic Kingdom. Justinian reconquered it for Rome, and then Charlemagne took it for the Franks but returned it to Constantinople by the Treaty of Aachen in 812. Over the next century, as Byzantine power shrank it became effectively independent. The town even has a monument from those years, the 9th century church of St. Donatus. 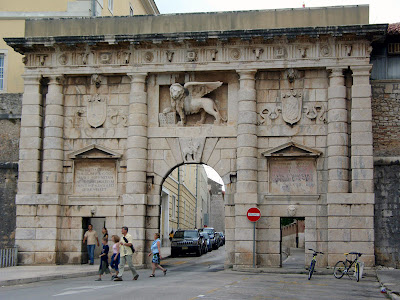 Then in 998 Zadar asked for help from the Venetians against pirates who had effectively besieged the town. The Venetians said, we'd be glad to help, and sent a fleet that defeated the pirates and then turned against Zadar, taking the town by surprise. Was there ever any state more treacherous and perfidious than the Venetians? The city gained its independence from Venice in the twelfth century, but in 1202 the Venetians used the army of the Fourth Crusade to take and sack the town, on their way to the dreadful sack of Constantinople. Among the monuments of their rule is the porta terra firma or landward gate, with the Lion of St. Mark. 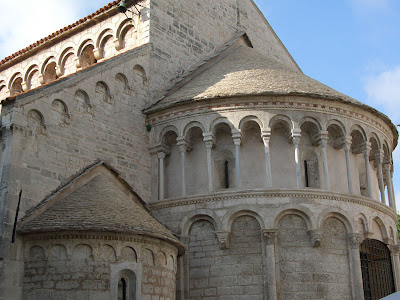 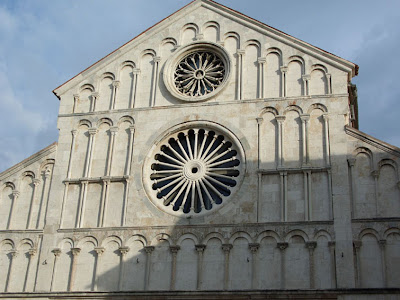 The people of Zadar did not give up, though, and they revolted several times against Venetian rule. In 1358 they finally managed to get themselves transferred to the Kingdom of Croatia. But they fell by inheritance to Ladislaus of Naples, who went bankrupt and in 1409 sold them to Venice for 1,000 ducats. They remained under Venetian rule until 1797, when the town became part of the Austro-Hungarian Empire. The town has several medieval churches, two of which are above. In the sixteenth century they were twice besieged by the Turks, and it was in those years that the great stone walls were built that still survive on the landward side. 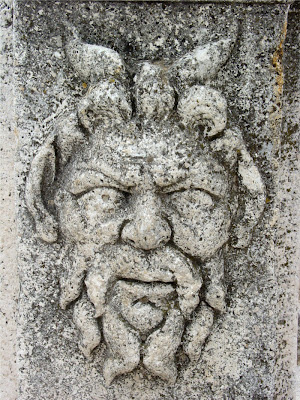 With so many layers of history, it is hard to know how old many buildings are, and even the recent ones incorporate ancient stones. This carving is said by tour guides to date to Roman times; it looks more Romanesque to me, but who is to say? 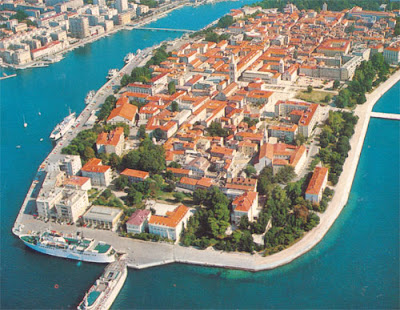