Life, Death and Transformation at the Brooklyn Museum 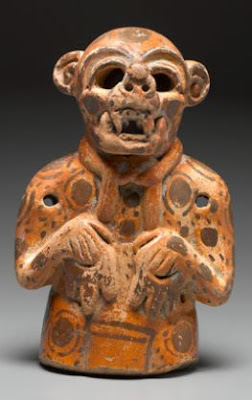 The Brooklyn Museum's amazing collection of American Indian art has been largely in storage for the past five years while they reconfigured their exhibits. Now it is back, in the form of an exhibit titled Life, Death, and Transformation in the Americas. Holland Carter has a review in the Times. The famous Maya sculpture above shows a hunchbacked human wearing a jaguar skin; the Maya, like many people, thought physical deformity suggested a strong connection to the divine realms, and this person was probably a shaman. 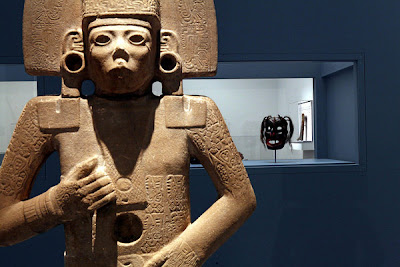 The exhibit takes the currently fashionable route of organizing American Indian art by theme, rather than separating the different tribes, periods or regions. The picture above shows a Huastec work made in Mexico between 900 and 1250 CE, a god carrying a human skeleton on his back, and a Wild Man mask made by Canadian artist John Livingston around 1970. I am not a huge fan of this approach myself; it seems to me to suggest that Indians lived out of time and never changed or developed. I gather that curators think people find chronology boring. I don't, but then I am a historian fascinated by how things developed, so I suppose I am not the typical museum goer. 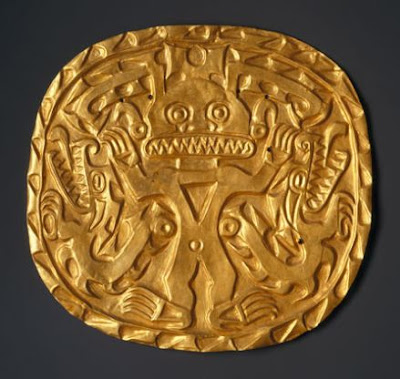 Gold ornament from Panama depicting the Crocodile God, ca 700 to 900 CE. To ancient Indians, the underworld was a watery place, and their underworld deities often had aquatic natures. Thus the crocodile god, eater of corpses who sometimes carried living men down into the depths. 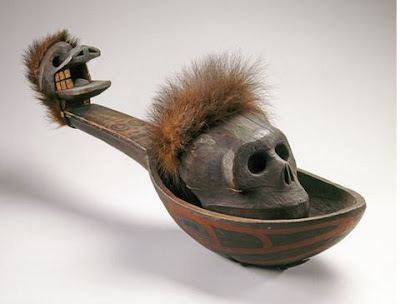 I'm glad the Brooklyn Museum  finally put these wonderful things back out where people can see them. Above, a 19th-century ladle used in initiation rituals by the Heiltsuk people of Canada's northwest coast.
Posted by John at 12:22 PM

As a humanities person (and a humanist) I agree with you on preferring chronology to thematic organization in museum-type exhibits.

The same is true for historical artifacts. Certainly it's interesting to see a collection of, say, religious iconography and ritual tools. But they become more meaningful when I can see what was going on in various places in 500 BCE, 100 CE, 500 CE, etc.

I think it's more the way my mind works: I'm an abstract sequential thinker, so I want to follow themes in some sort of order, rather than have what feels like a random scatter such as the Brooklyn Museum exhibit seems to be.