To Mars Via Ion Drive 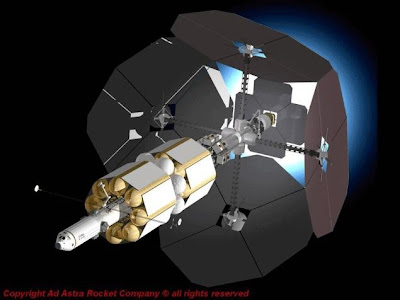 The biggest obstacle to getting to Mars is the radiation to which the astronauts would be exposed during the months-long journey. Close to earth, where the International Space Station orbits, our planet's magnetic field offers protection from much of this radiation, but most of the journey will be out in the unprotected wastes of interplanetary space. Six months in that environment might be deadly.

One way to get around the problem would be to make the trip quickly. This is not possible with conventional rocket engines; the amount of fuel needed is too great. But the new technology of electric -- or ion, or plasma -- propulsion might work. These systems use electrical energy to strip electrons from gas atoms, turning them into ions that can be accelerated to great speed and directed very precisely using magnetic fields. They cannot generate the huge thrust needed to escape from earth's surface, but they can keep generating a modest thrust for long periods using much less fuel than a conventional rockets. The technology is already in use on some space probes.

The latest version of this technology is called VASIMIR, or Variable Specific Impulse Magnetoplasma Rocket. Somebody at NASA called this a "game changer." Its makers, Ad Astra of Texas, claim that a large VASIMIR system (see the concept drawing above) could power a mission to Mars in just 39 days. This is a VERY ambitious and expensive plan, requiring that a rocket plant be set up on the Moon to build and test the engines, and a large space station be built at the earth-moon Lagrange point to assemble the ship, among other multi-billion-dollar tasks. This scheme is not likely to happen in my lifetime. But with this technology improving so rapidly, other, small and less expensive missions may become possible.
Posted by John at 6:42 AM