Here's an Idea for a Murder Mystery 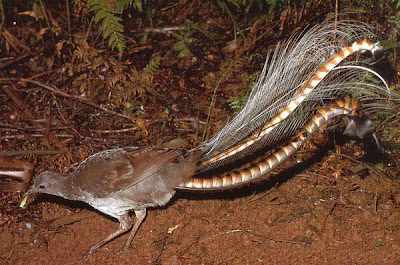 A body is found dead in the Australian forest and the only witness is . . . a superb lyrebird. Robert Krulwich:

Back in the 1930s there was a bird, an Australian bird, who had this thing for a human lady. The lady's name was Mrs. Wilkinson (I couldn't find her first name) and she lived in Australia. So did the bird. It visited her daily for food. She named it "James." When James the bird decided to woo Mrs. Wilkinson, he built a mound in her backyard, stood on top of it, and sang. Mrs. Wilkinson, naturally flattered, invited some human friends to listen.

According to those who were there, on one occasion James sang for 43 minutes. Because James was a superb lyrebird (that's what they're actually called), his songs included sounds he had heard in the woods and suburbs where he lived. Lyrebirds are probably the world's most gifted mimics and according to Wikipedia, James' love song to Mrs. Wilkinson included a kookaburra's laughing song, the calls of cockatoos, wattle-birds, starlings, parrots, an automobile horn, a rock-crushing machine and a jackhammer.

And they can remember for a long time:

In 1969, Neville Fenton, an Australian park ranger, recorded a lyrebird singing a song that sounded very much like a flute, a flute being played by a human. After much sleuthing, Mr. Fenton discovered that 30 years earlier, a farmer/flute player had lived near the park and played tunes to his pet lyrebird. That lyrebird downloaded the songs, then was allowed to live wild in the park.

Assigned to a cold case file, our intrepid detective visits the site of the killing and encounters a lyrebird. The lyrebird keeps repeating a song that sounds like an old jeep, a snatch of guitar music, female laughter, a scream, two gunshots, and then a mysterious, vaguely electronic noise. . . .
Posted by John at 10:05 AM