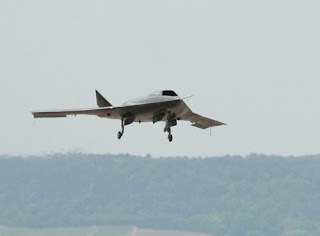 Sometimes news stories interest me not because of their subject matter, but because they make me wonder why they are in the news just now. Consider this report from the Washington Post:

Using unmanned planes designed to evade radar detection and operate at high altitudes, the agency conducted clandestine flights over the compound for months before the May 2 assault in an effort to capture high-resolution video that satellites could not provide.

The aircraft allowed the CIA to glide undetected beyond the boundaries that Pakistan has long imposed on other U.S. drones, including the Predators and Reapers that routinely carry out strikes against militants near the border with Afghanistan.

Why, do you suppose, are "current U.S. officials" suddenly so chatty about the capabilities of our secret stealth drone program? Are they razzing Pakistan about what we can do without their even knowing about it? Trying to scare terrorists? Angling for more funding? Are the drone guys and the satellite guys engaged in some kind of power struggle? Weird.
Posted by John at 7:42 AM