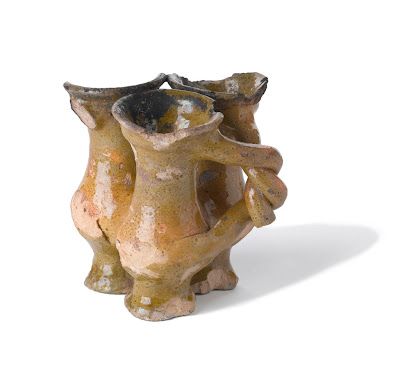 This interesting item was unearthed during excavations into the slum neighborhood of London known as St. Giles Rookery. It dates to the late 18th or early 19th century, and it is what contemporaries called a "Fuddling Cup." To quote the Museum of London:

A fuddling cup is a three-dimensional puzzle in the form of a drinking-vessel, made of three or more cups or jugs all linked together by holes and tubes. The challenge of the puzzle is to drink from the vessel in such a way that the beverage does not spill. To do this successfully, the cups must be drunk from in a specific order.

In this excavation, as in all other excavations into 19th-century slums I have ever read about, the excavators found a large assortment of fairly nice artifacts. I have excavated tenant farms of circa 1800 that produce next to no artifacts, but even the meanest slum tenement site is chock-a-block with stuff. This seems to be telling us something important about life in urban slums: poor urban people had (and have) a fair amount of stuff. Maybe it was broken and dirty, but they had it nonetheless. I think that the urban environment was just richer in stuff than rural areas, much of circulating among the poor via pawn shops, used goods dealers, and so on.
Posted by John at 9:59 AM