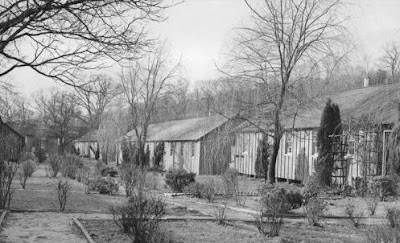 Today in Baltimore County there was a ceremony honoring the conscientious objectors of World War II. During that war the US government allowed conscientious objectors to do their service in something called the Civilian Public Service. This entity was modeled to some extent on the Civilian Conservation Corps of the 1930s. Initially the 12,000 men of the CPS lived in rural camps, many of them former CCC camps, and did the same sort of work CCC volunteers had done. They fought forest fires, built camps and roads in national and state parks. Eventually the program included 152 camps, but the first was in Patapsco State Park just a few miles from my house (above). Most of the men were Quakers, Mennonites, or members of other pacifist churches. One difference from the CCC is that the men of the CPS were not paid by the government, and even their food had to be provided by the churches that supported them.

Some of the men were disappointed by the work assigned to them and agitated for more meaningful jobs. One suggestion was that they work in mental hospitals, which were having trouble finding able-bodied orderlies. The War Department at first resisted, because they wanted the pacifists kept segregated in their rural camps so their ideas would not spread. They eventually gave in, though, and CPS men worked in mental hospitals across the country. Some became reformers, and four who worked in Philadelphia founded a journal for mental health workers. The administrator of the program was Army general Lewis B. Hershey, who once called the CPS

an experiment to find out whether our democracy is big enough to preserve minority rights in a time of national emergency.

We did. During World War I, conscientious objectors were imprisoned, or made to do latrine duty at military camps where they were mocked by the soldiers. (The idea was that the abuse would cause them to man up and enlist for combat. It didn't work.) The Justice Department even tried to indict the leaders of the Mennonite Church under the Espionage Act for trying to sabotage the war effort. But in World War II the Roosevelt administration and some Congressional leaders were persuaded that keeping conscientious objectors far from the war effort was the wisest course, so they did the right thing for less than perfect reasons.

I suppose a sufficient mass of pacifists would be a real problem for a country but a few thousand in a nation of millions are no threat, and there is no reason why we shouldn't leave them alone.
Posted by John at 7:10 PM