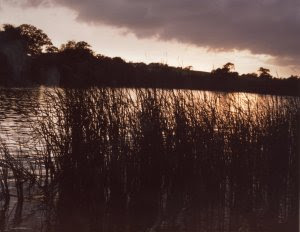 In the days of the Roman empire, when Uriconium was standing, a very wicked city stood where we now see Bomere Pool. The inhabitants had turned back from Christianity to heathenism, and though God sent one of the Roman soldiers to be a prophet to them, like Jonah to Nineveh, they would not repent. Far from that, they ill-used and persecuted the preacher.

Only the daughter of the governor remained constant to the faith. She listened gladly to the Christian's teaching, and he on his part loved her, and would have had her to be his wife. But no such happy lot was in store for the faithful pair. On the following Easter eve, sudden destruction came upon the city. The distant Caradoc [a hill] sent forth flames of fire, and at the same time the city was overwhelmed by a tremendous flood, while the sun in the heavens danced for joy, and the cattle in the stalls knelt in thanksgiving that God had not permitted such wickedness to go unpunished.

But the Christian warrior was saved from the flood, and he took a boat and rowed over the waters, seeking for his betrothed, but all in vain. His boat was overturned, and he too was drowned in the depths of the mere. Yet whenever Easter eve falls on the same day as it did that year, the form of the Roman warrior may be seen again, rowing across Bomere in search of his lost love, while the church bells are heard ringing far in the depths below.