Is it the Process or the Job? 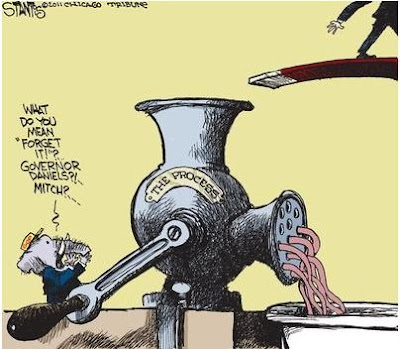 This cartoon set me thinking. Is the process of running for President really irrationally miserable? I'm not sure.

In the case of Mitch Daniels, the biggest obstacle may be his family life; he and his wife divorced, apparently because she had had affairs, and then remarried, apparently because he forgave her. I can see not wanting to listen to hour after hour of speculation about what this means. But does anybody think the speculation would be less intense if he were President? It would be constant, and it would be rekindled every time he visited a new country and a new set of journalists got to mull over his toughness and whatnot. Since we are so obsessed with the private lives of public figures, a nomination process that did not involve raking through the candidates' closets would hardly give us people who could do the actual job of leading the country.

There are some bizarre things about running for president. Each party has powerful interest groups that insist the candidates swear fidelity to their positions, even when they might tie a President's hands in destructive ways. Some of these at least are real issues, such as abortion and taxes. Others, though, are just words that people recite, like "support for Israel", "education reform," support for "Christian values," or being pro or anti government. (As if everybody were not both.) It particularly bugs me that politicians are expected to have been consistent over time when the electorate itself has not. Mitt Romney's problems with health care are a perfect example. Five years ago he was praised by conservative leaders for offering a conservative alternative to socialized medicine, but now opinions are shifted and he is pilloried for the same thing that got him praised five years ago. Angry voters seem to have no memories.