Freedom in the Swamp

Archaeologist Dan Sayers has been working in the Great Dismal Swamp of southeastern Virginia for ten years now, trying to document the settlements of maroons -- runaway slaves -- that some historians think lived in the hidden recesses of the swamp. Past Horizons has a story on his work that has the same characteristics as everything else I have read about this project: tantalizing hints of discovery but no actual data. I hope he is saving up his results for a big publication, because I am starting to think that the years of silence mean little or nothing has actually been found. This is not really a dig at Sayers but a problem with trying to study certain kinds of people through archaeology. What, do you suppose, would a runaway slave living in a swamp actually own? What traces would a camp of such people leave behind? And how would you distinguish their camps from those of other people who might have been in the swamp?

Aside from maroons, Sayers says the swamp was also home to Indigenous Americans (Native Americans), enslaved canal labourers (African-Americans who worked for the canal companies—some worked to buy or earn their freedom), free African-Americans, and outcast Europeans, such as criminals.

This must be from historical documents, since even in principle it would be difficult to make such identifications from archaeology. What Sayers admits to having found certainly doesn't amount to much:

Sayers says the items unearthed during the past decade have been mundane, everyday items—such as part of a broken bowl, a gunflint, a stone tool, or bone fragments of a butchered animal—but they help tell the story of the people who lived there and how they interacted with each other and the outside world.

Sad to say, some of the people we would most like to learn about archaeologically -- because they are not well documented in written records, or because they lived outside the main currents of society -- left very little behind for us to study. I have been on my own quest for the past decade to learn more about the residents of the colonial frontier, and so far most of what I have learned is negative: they did not own much in the way of ceramics or glass, their houses were built without nails or window glass, they did not dig wells, and they did not stay in place for very long. 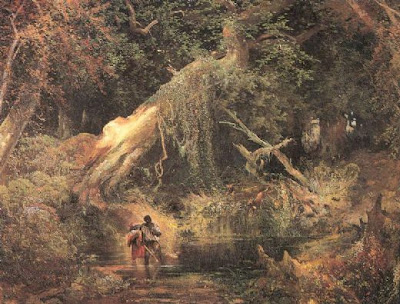 In the case of possible maroon communities in the swamp, the historical record is also clouded by legend-making. The notion of such slave hide-outs was fascinating to Americans -- grimly so to most Southerners, Romantically to northern abolitionists --which is why there are several paintings and numerous engravings of the subject. (The one above is by Thomas Moran.) Claims of large maroon communities in the swamp ring more of horror or triumphalism than observed fact. But then, if such communities existed they must have been very well hidden indeed, because otherwise the Virginia militia would have wiped them out.

Hence the lure of archaeology to find out how much truth lies behind these reports. I wish the explorers luck, but I have to say that I am not really expecting major discoveries.
Posted by John at 7:05 AM